Look, September kicked my butt. I was late on two pattern tests, purely because I forgot when they were due… I’ve been telling Jamie every weekend that I’ll sew him pants, and 4 weeks later, I haven’t yet… and I only blogged 3 projects in September, all of which were sewn in August! The shift back from summer holidays is  hard one, so I’m grateful that Canadian Thanksgiving has given me a weekend to get my head on straight!

With that, here’s an autumn project I sewed in summer! 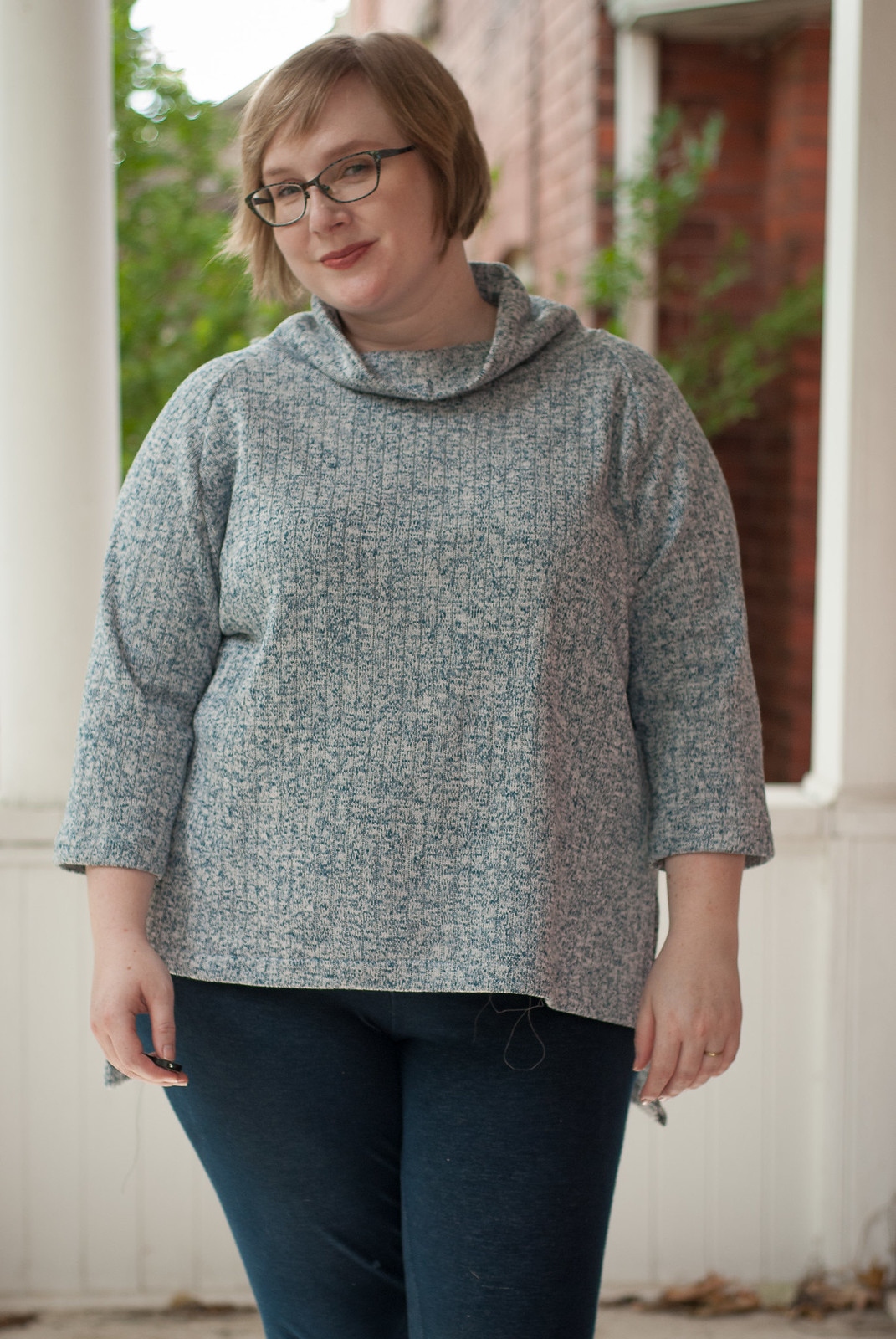 It’s the new Helen’s Closet Elliot sweater and tee! There were a bunch of little tweaks to the pattern after testing, but I’ve also sewn up the new version and found the fit quite similar. It’s a modern boxy raglan, with options for t-shirt neckline, the half-height collar I did here, and a full height collar for maximum snuggliness. 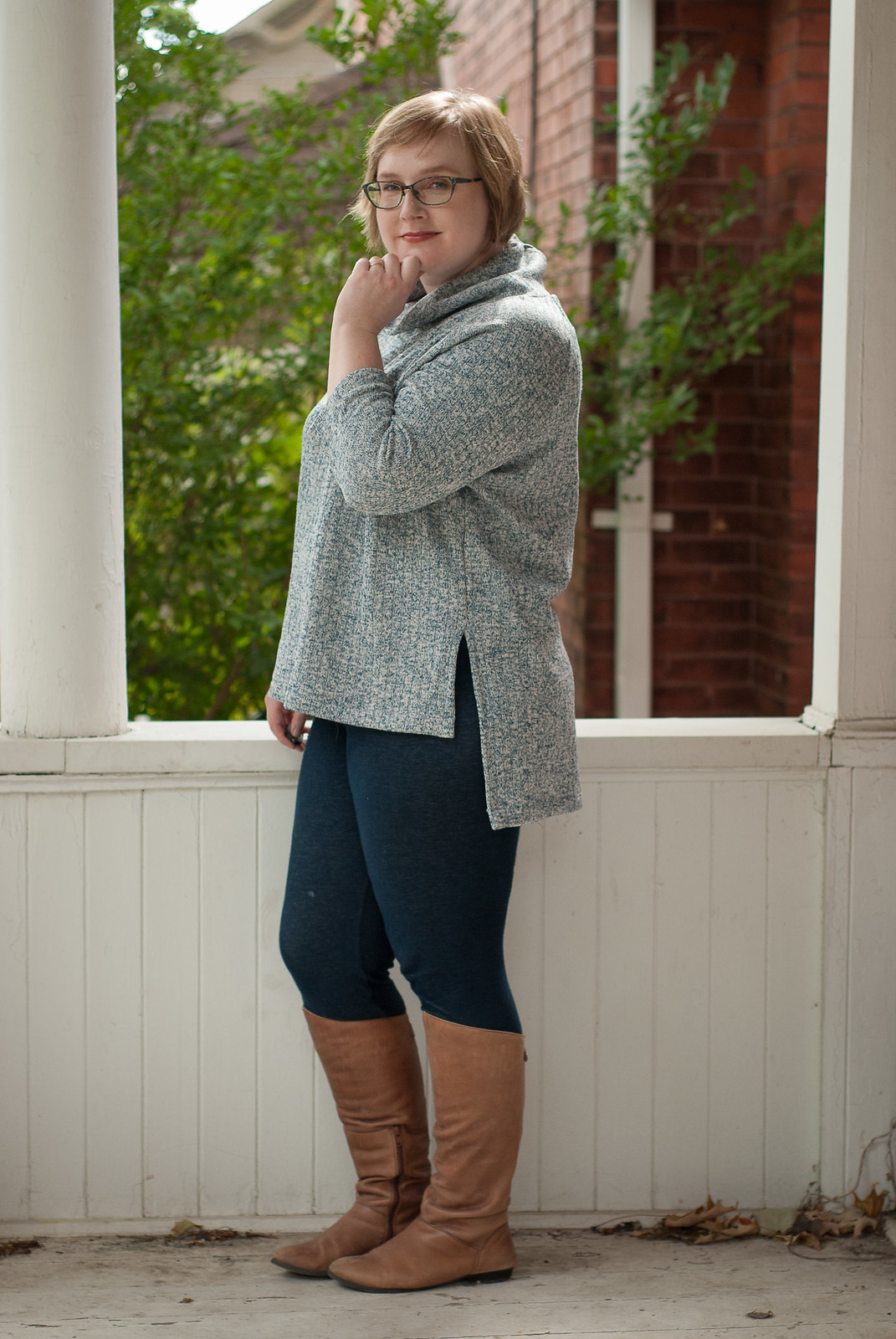 I sewed this version in a stable heavy knit that looks like sweater knit from the outside and is like sweatshirt fleece on the inside. You can probably picture the type of fabric I mean! On the plus side, it’s super cosy – it was 30c when I took these pictures! 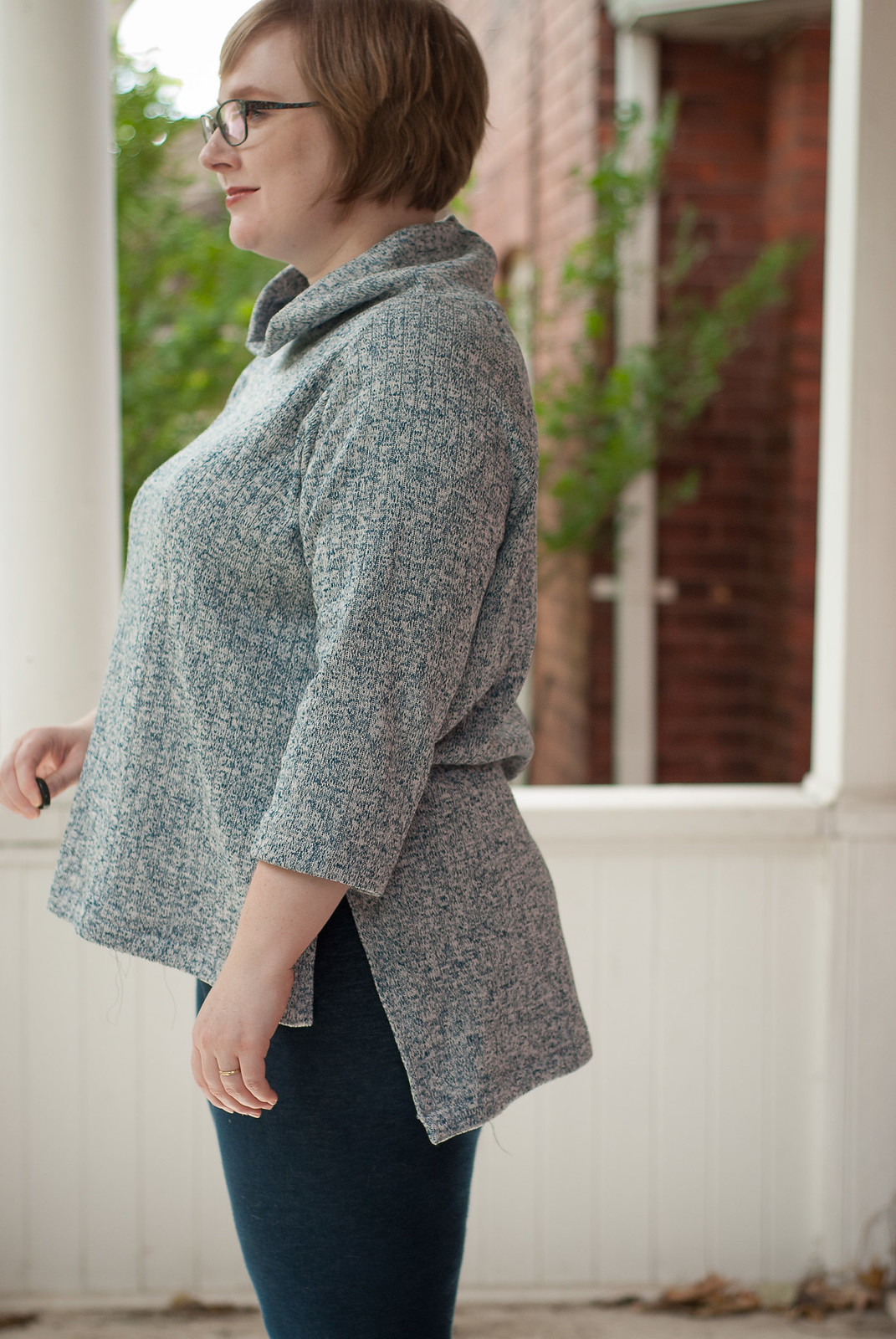 On the down side, the fabric doesn’t have any vertical stretch so it tents off my bust and pools at the back. My second version was made in ponte, which… lets face it, was not the best fabric choice! I think a stretchier fabric would make everything drape better on me. The cowl is a straight rectangle, so consider how it will sit in your fabric. 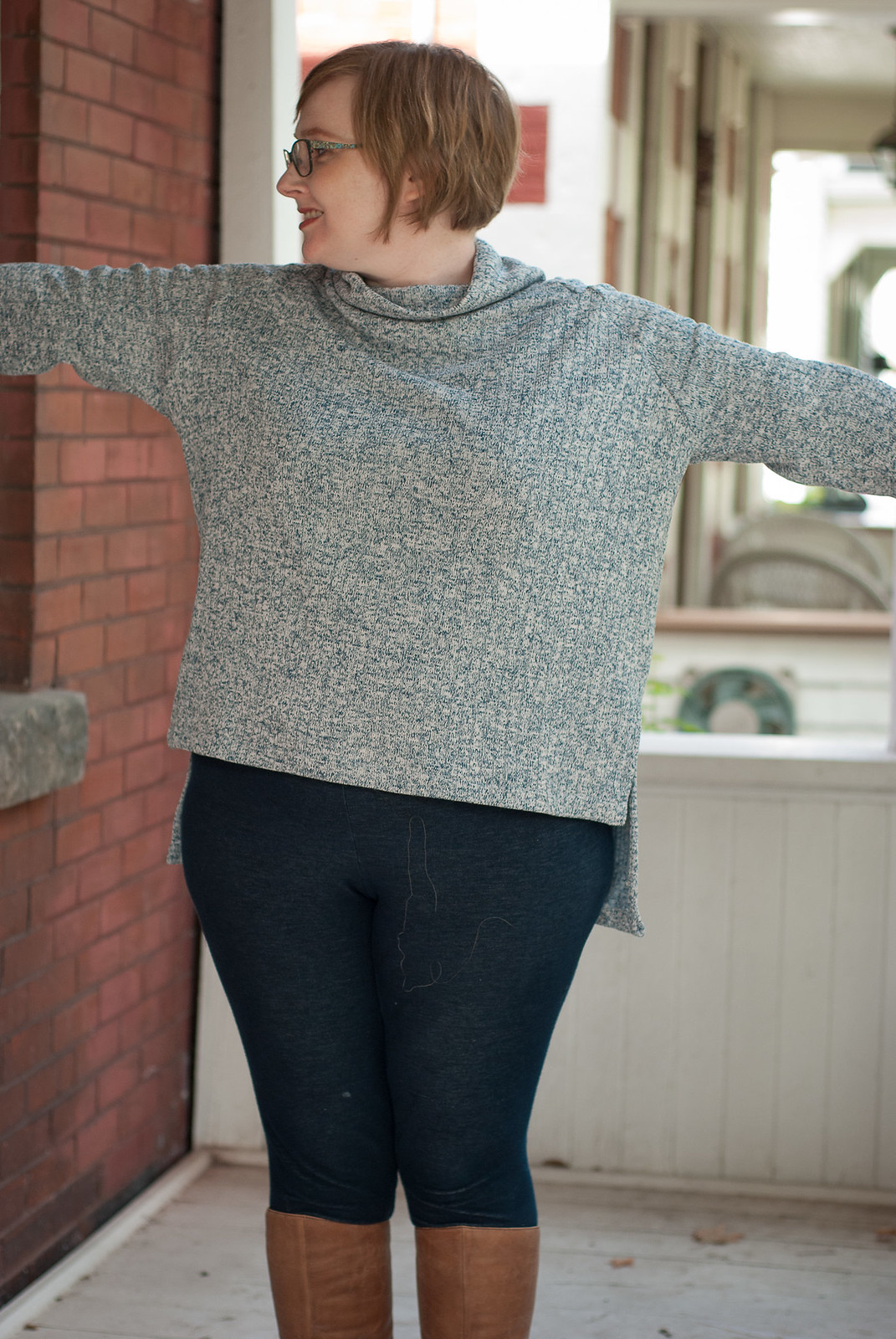 Yes, I do have a long yellow thread stuck to my hem/leg in all these pictures!!!!

Another point for my fellow curvy pears… I suggest you do grade between sizes! I sewed a straight size XXL (the size that fits my hips) because I thought, “Oh, a boxy style will be fine if it’s oversized on top!”.. but on both versions, the raglan seams were just too wide apart and the armscyes are quite far from my body. I think grading between sizes would fix that! 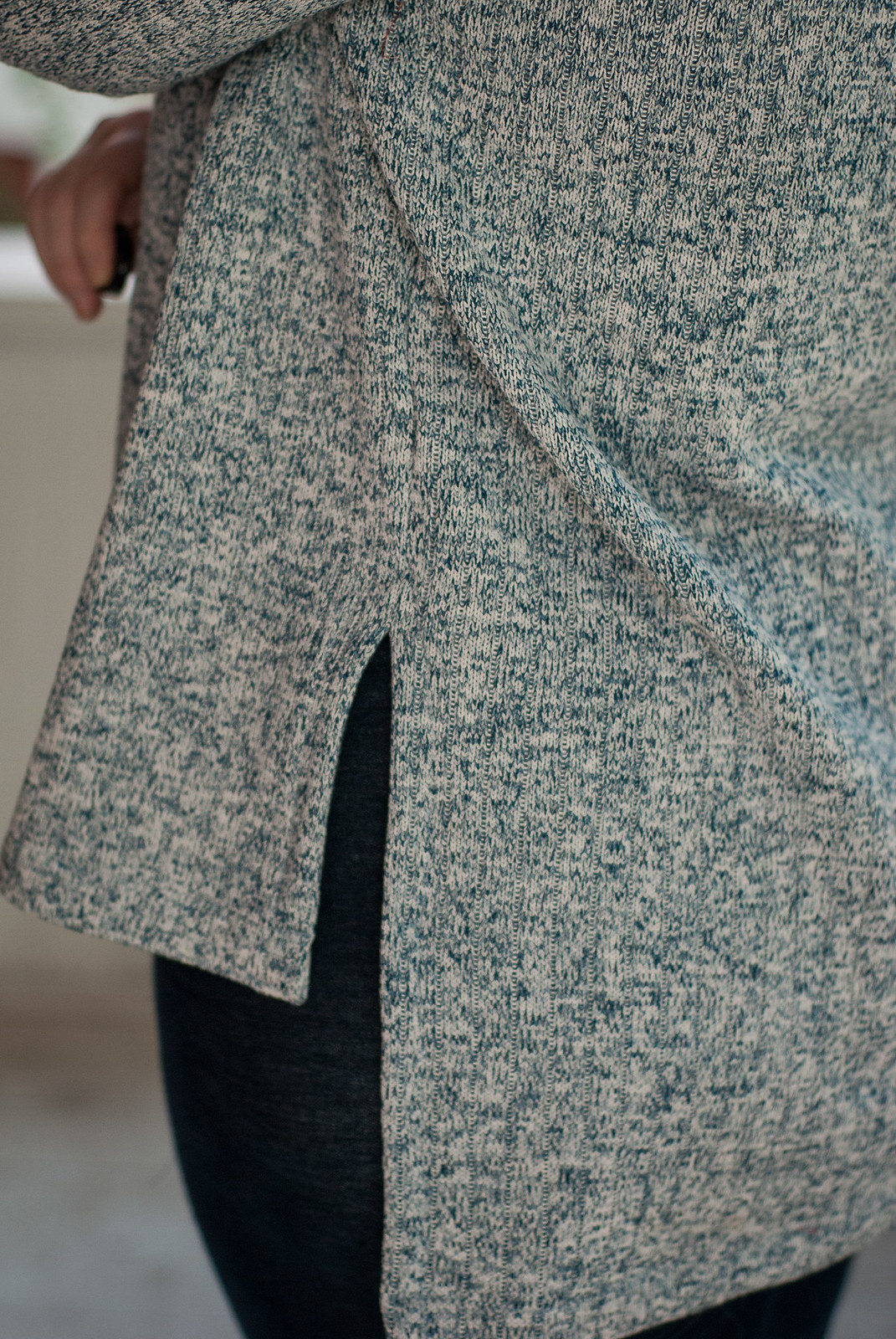 Overall, this is exactly the kind of sweater I love to wear in cold weather, especially to lounge around the house. I’ll show you my ponte version eventually, but it has to go on the Cali Fabric blog first! I think the Elliot Sweater is going to be a big hit, and I’m looking forward to seeing how other people interpret the sizing, shape and fabric choices.