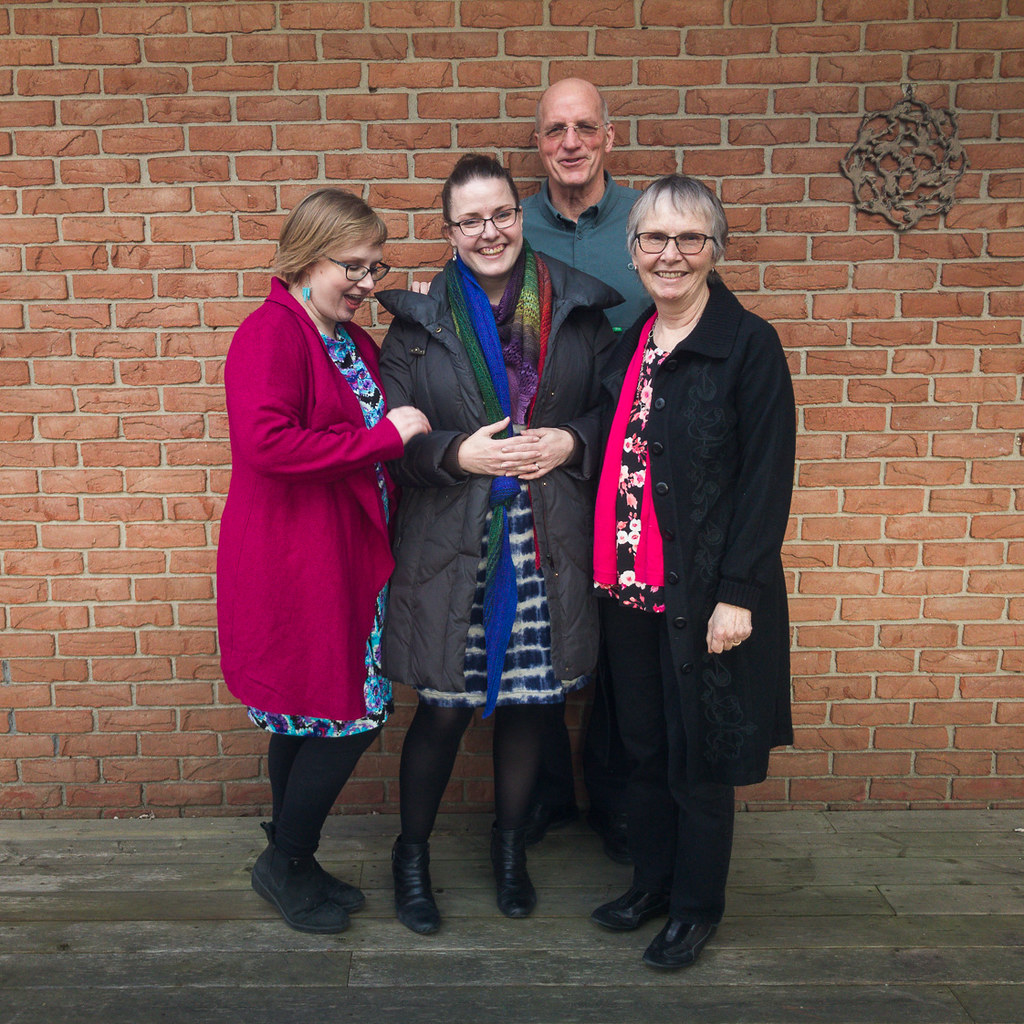 My parents and sister and I went to Toronto for our extended family Easter potluck last weekend, and we took a quick family picture to send all the exchange students who lived with us over the years! It was throughly handmade – I made my dress, jacket, Anne’s dress and my mom’s top, Anne made her scarf, and my dad and I discussed the sewing blog post he has coming up here! 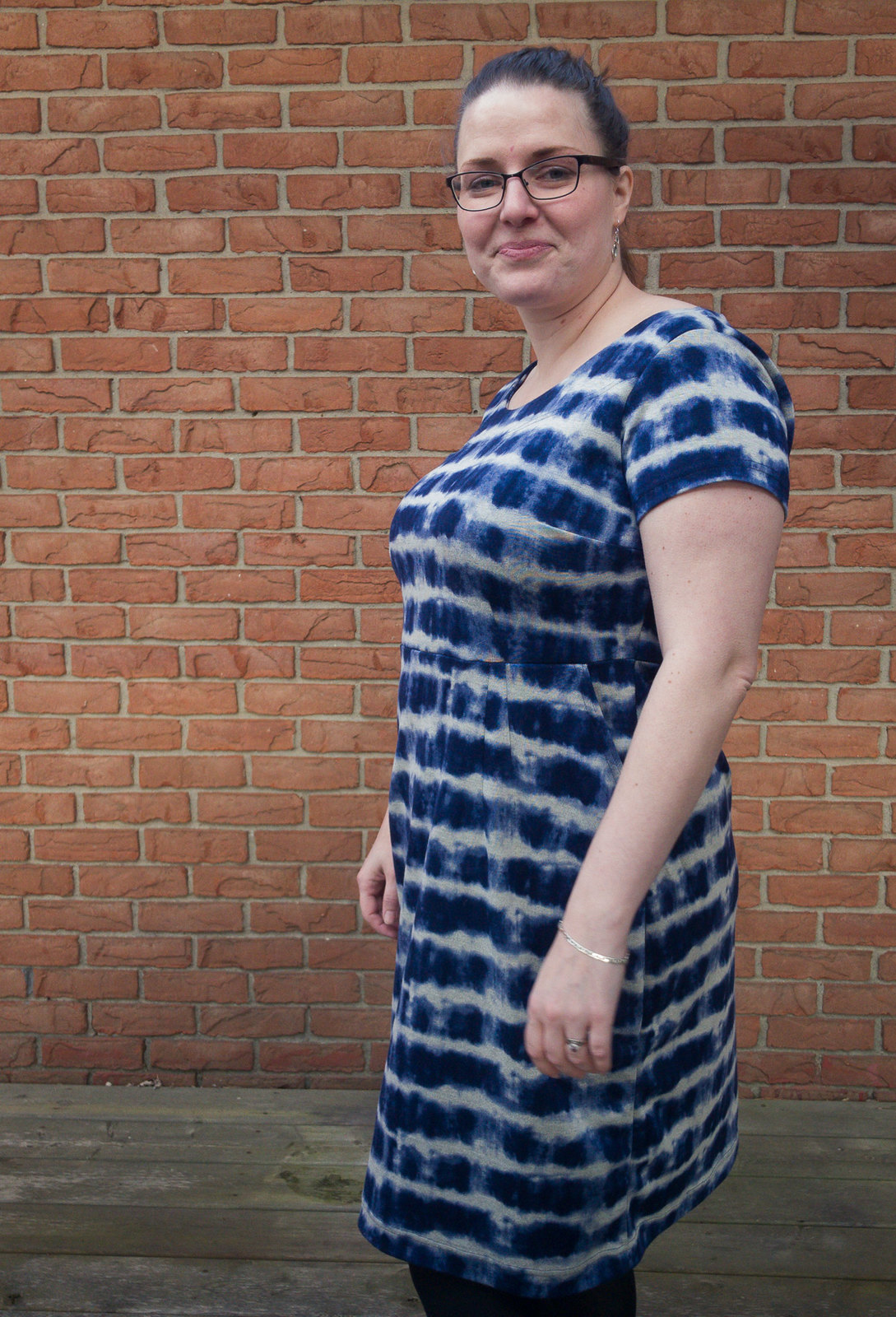 Despite the sharp wind and beginnings of snow, Anne was a trooper and modelled the short-sleeved Cashmerette Rivermont I just made her! I’ve made this pattern for her twice before – the recent black one and a heavy ponte version last year. I often end up modelling things I make her on myself, but we thought it would be nice to show how they actually fit her! We have similar measurements, but significantly different shapes. 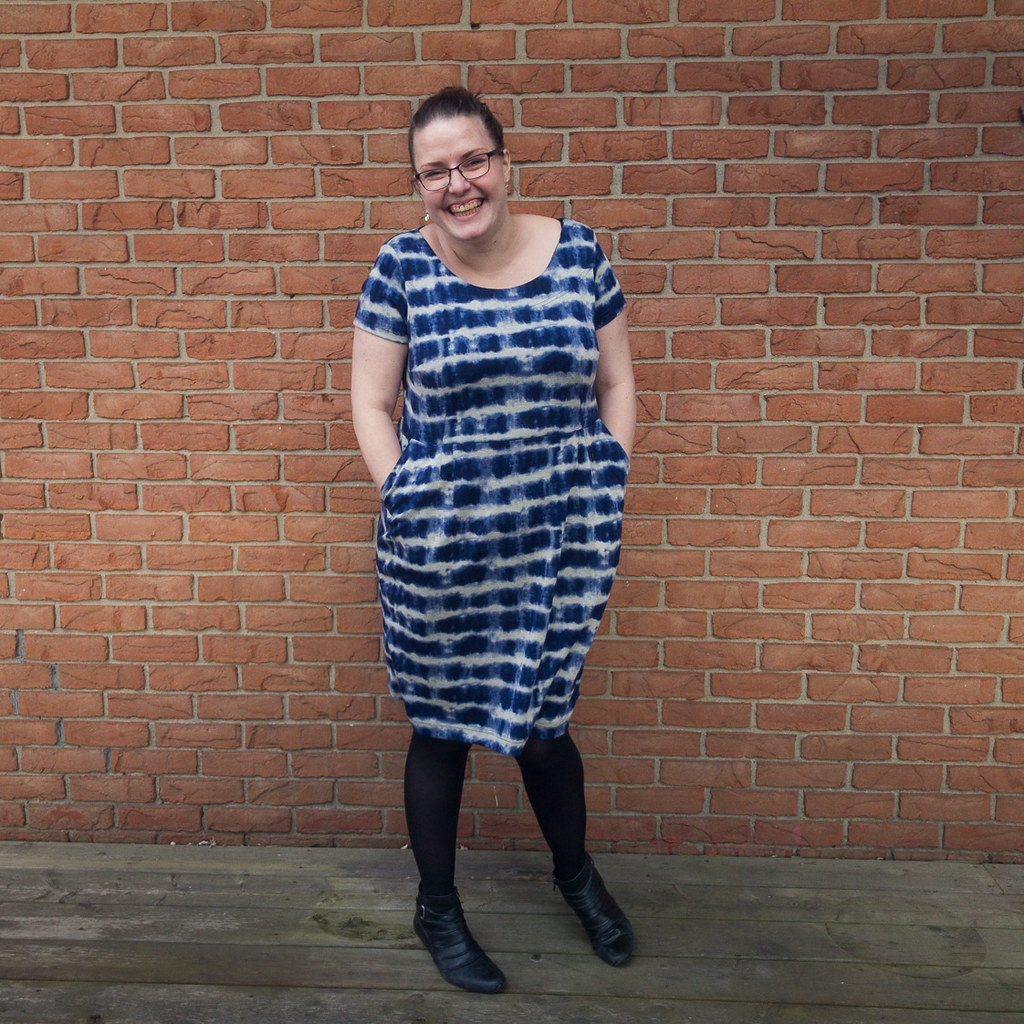 For this version, we decided to go summery and casual with this indigo tie-dye double knit. Anne picked it up a destash sale last year, and neither of us knew quite what to do with it… until we realised that 2m is just enough to make this dress! I used the short sleeves that come with the pattern, and scooped out the neckline slightly. I think little tweaks can camouflage TNT patterns, so that coworkers won’t spot that today’s outfit is really just another version of yesterday’s! 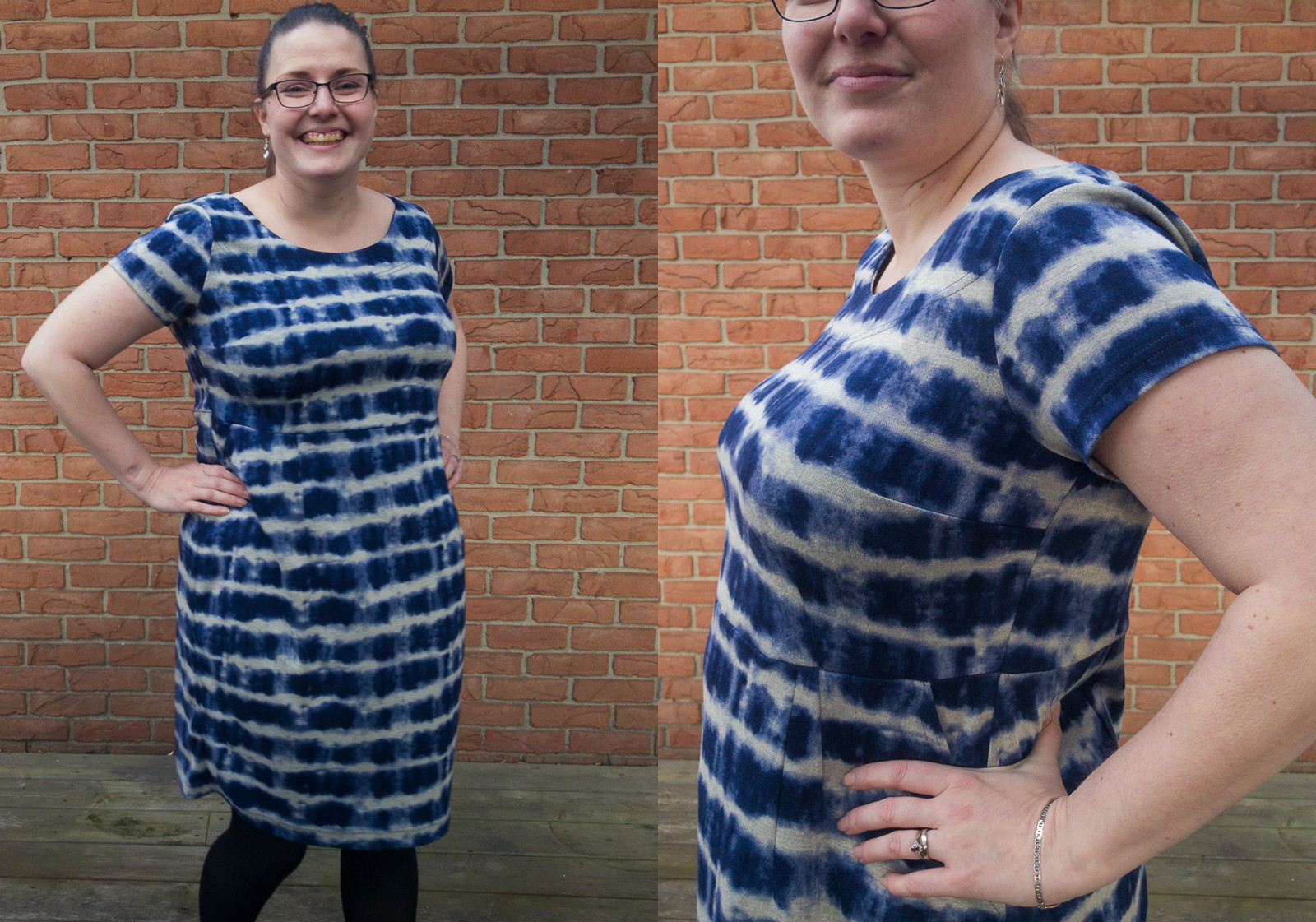 Our favourite part of the Rivermont dress is is all the darts – there are 12 in all! It gives a really fabulous fit all over without any pulling. I think Anne looks so lovely in it – comfortable yet totally pulled together and chic. 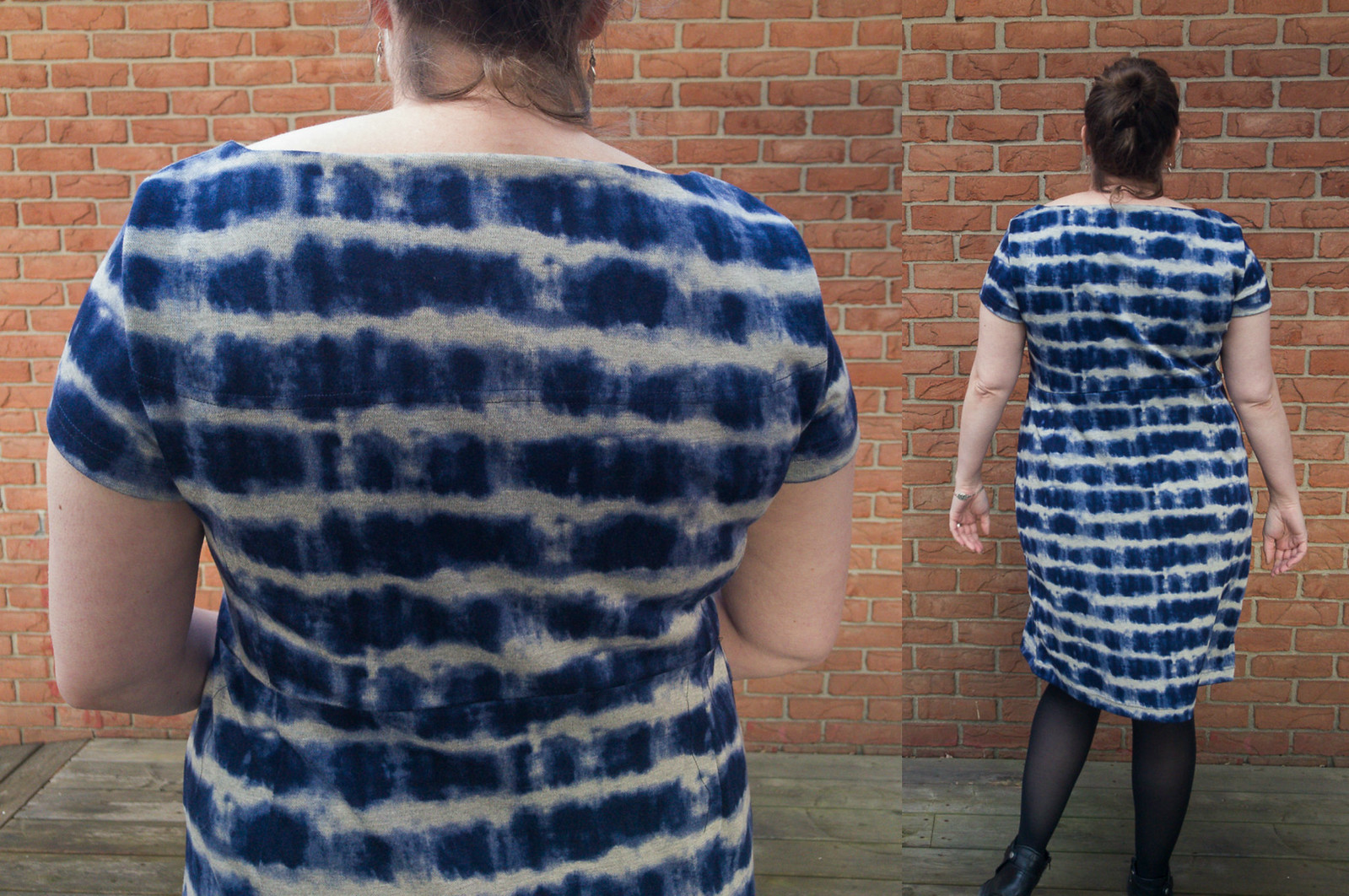 The neckline is finished with facings that extend all the way to the shoulder seam, but I hate flippy-facings so much that I always topstitch them just to be safe. If you really squint you can just about see a double-line of coverstitching going from armscye to armscye above!

What you probably can’t see if that Anne has an insulin pump clipped at her waist under the dress – she was a total pro and kept moving it out of shot. It resulted in hilarious pictures of her contorting to move the pump around, but as a *reformed and mature younger sister*, of course I won’t show you that! (Anne was telling stories on the drive about how I always used to try to talk my way out of everything as a little girl, and it pissed her off because she thought my parents might actually believe my shameless attempts at spin! Good thing they are all much smarter than me – and as far as anyone can remember, Anne taught me to read before kindergarten, so good job her!)

And yet… turns out I’m still the bossy sister! I bet you can imagine exactly what direction I was giving her in each photo! 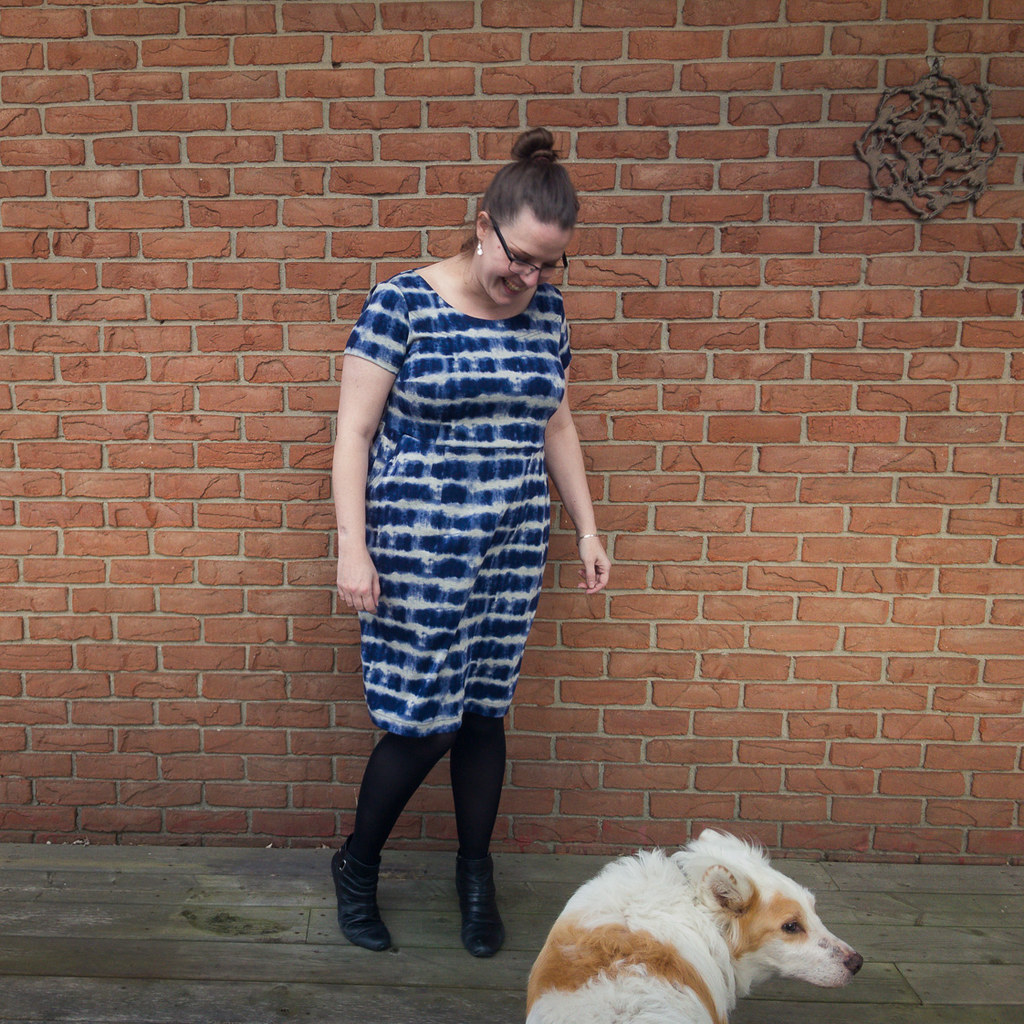 Anne’s dog Kodak approves… but was ready to head inside out of the cold wind as soon as possible!

8 thoughts on “Family Easter Fun (And finally my sister wearing a dress I’ve made her!)”