Do you ever have those times where you want to sew, but you can’t decide what?

I was having one of those moments last week, pulling out fabric, deciding against it… when I remembered that I’d just watched a class on strip quilting during the Craftsy all-you-can-watch weekend. So without a real plan, I found myself making a mini quilt!

I have stacks of beautiful fat quarters bought while I lived in Japan, but once I started sewing clothes, the quilting cottons just gathered dust. I’m trying to consolidate my sewing into just one room, and using some of my stash seemed more fun than finding a place to fit it all! 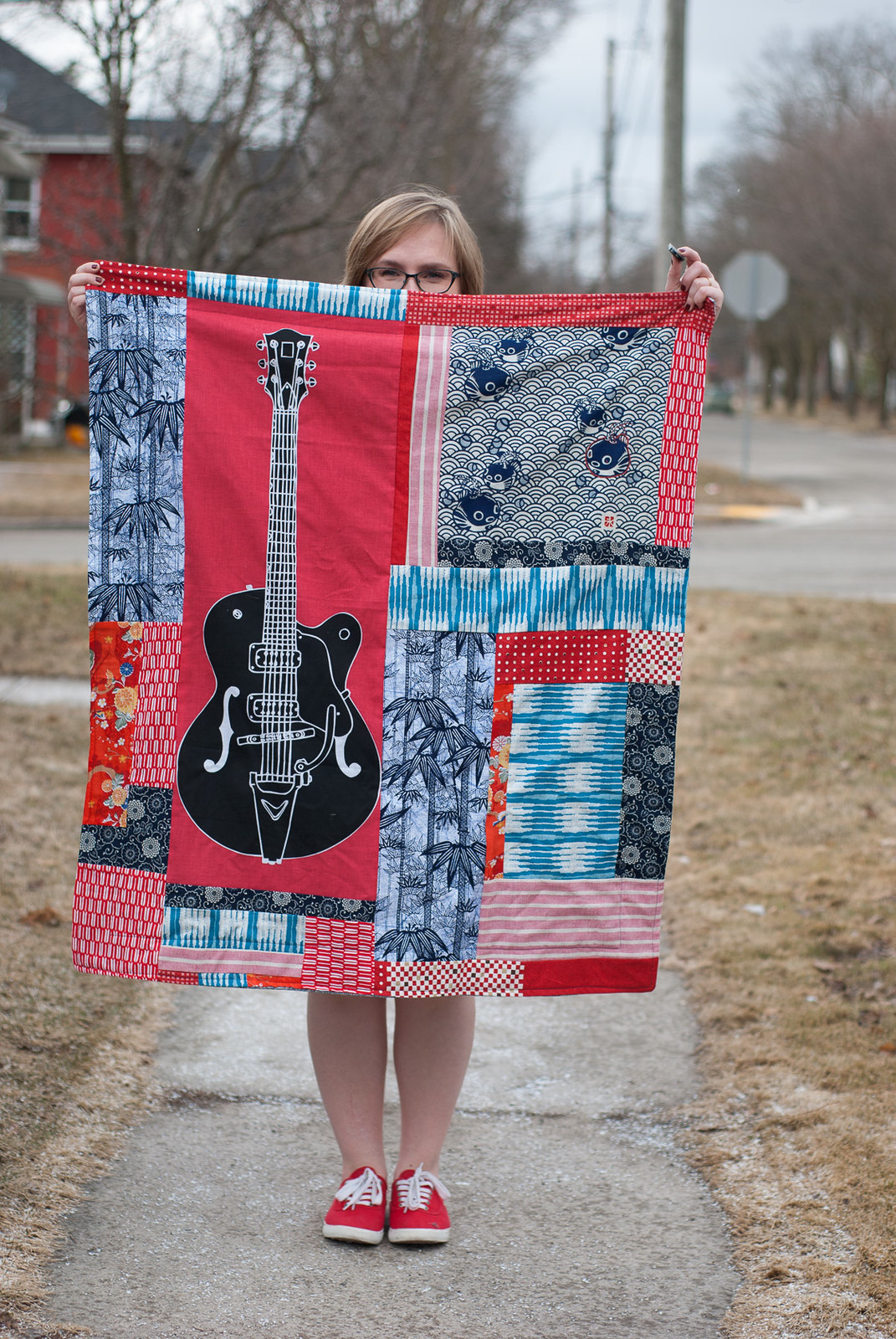 The genesis of this little quilt was the navy and white puffer fish print that is in the top righthand corner. It’s actually the remnants of the first thing I ever sewed Jamie! Literally within a couple of weeks of starting to date him, I made him a little square throw pillow with those fish on the front, and the orange and white print to its right as the back. I remember that the first time I was introduced to his mom on Skype, Jamie waved the pillow around to show her! 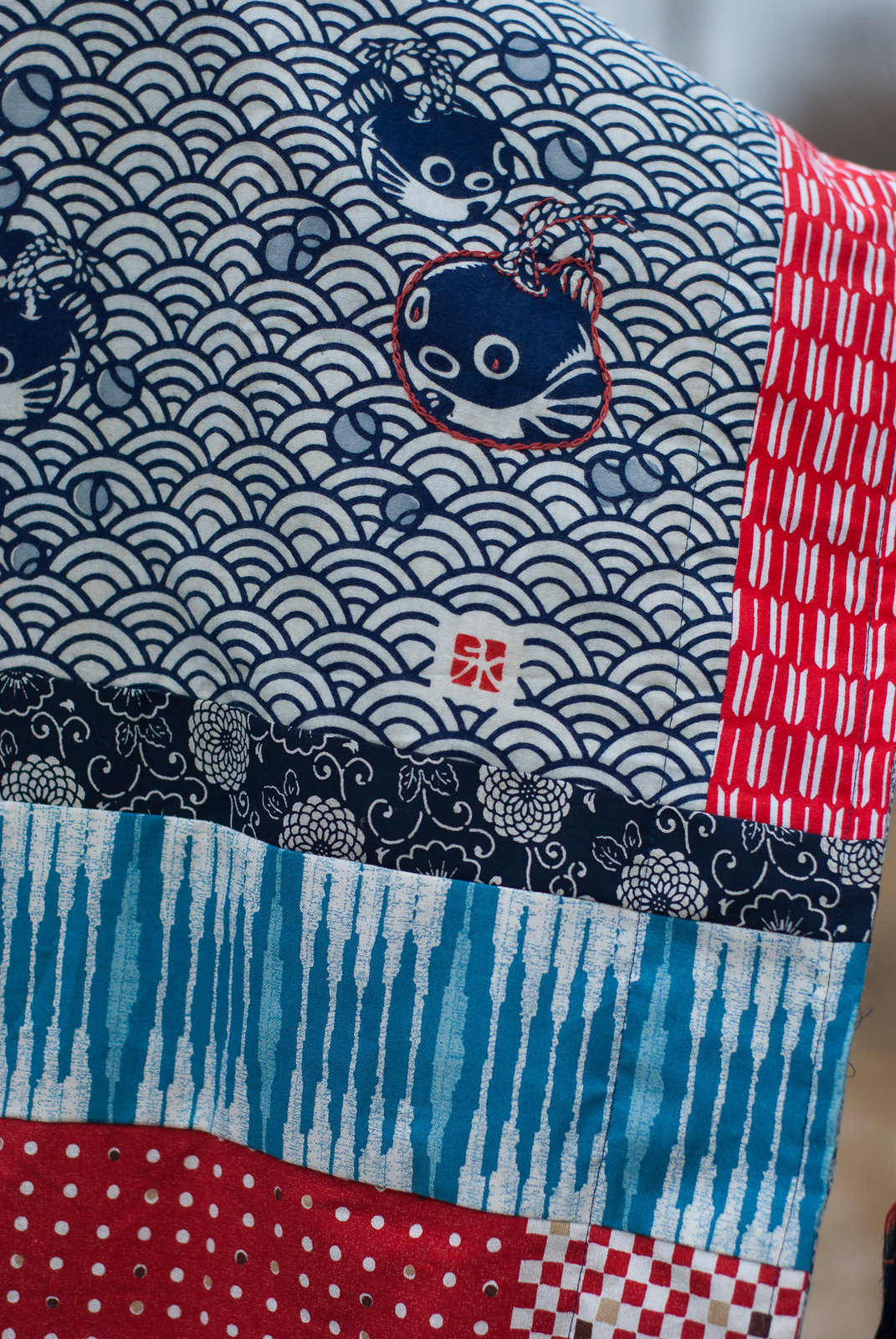 Pufferfish (aka. Fugu in Japanese) were the official fish of the city where I first lived in Japan, so fugu were all over ours hopping centre, manhole covers, bus upholstery, and everywhere else!

Another nostalgic print I’ve been saving is the red and black guitar. You can probably tell, I was pretty obsessed with the beautiful “hand towel” cotton prints in Japan, and we had them hanging all over our apartment. Jamie was in a band at the time, so we had three of these guitars on the wall! 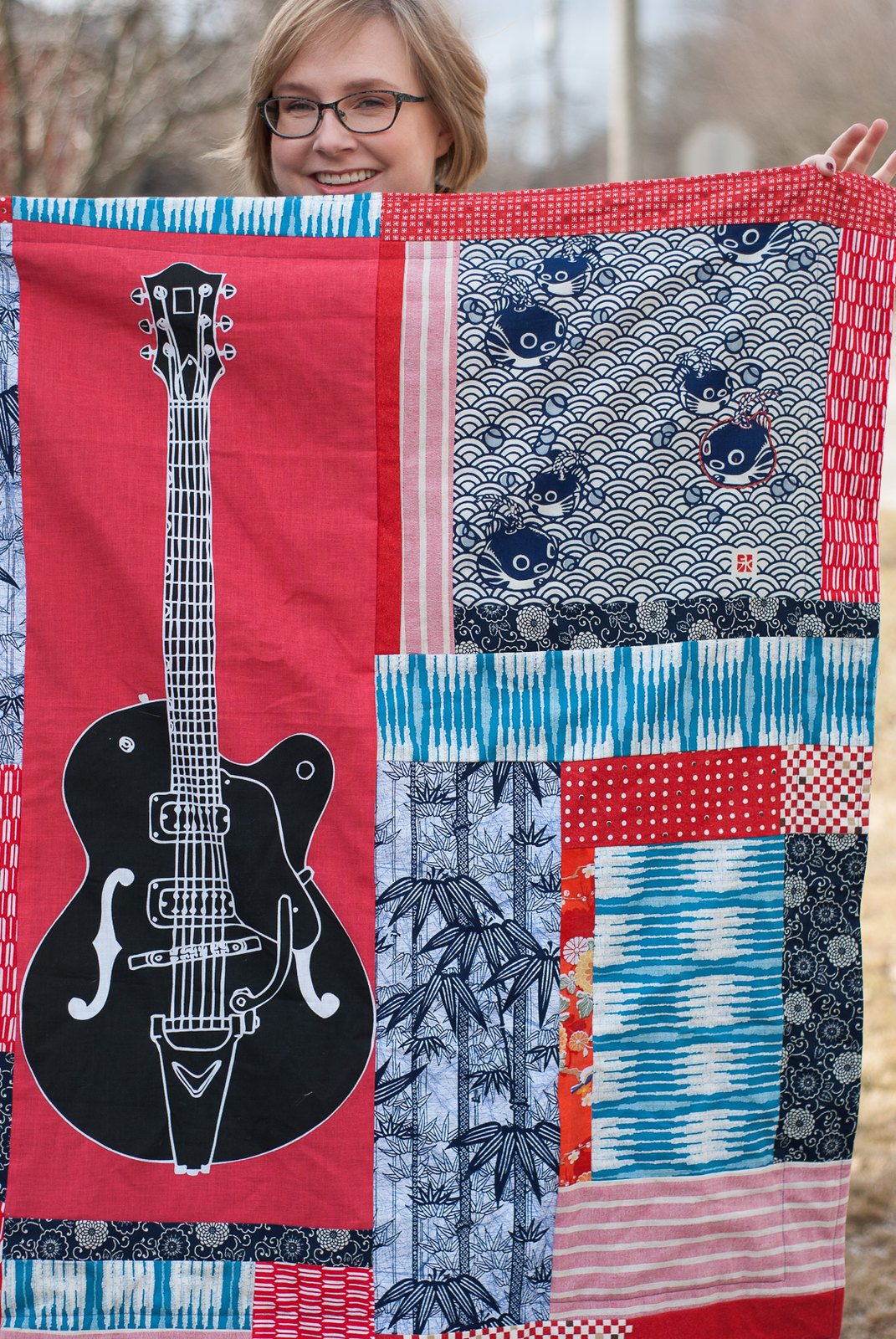 The rest of the fabrics are a real mishmash, but I remember shopping for every single one and they all make me smile! (For example, the bamboo print was a scrap of old kimono from the famous Nippori fabric district in Tokyo… and the orange floral was a free gift-with-bottled-water handkerchief!) It was really fun to put these sentimental fabrics together in a way that will get enjoyed every day! 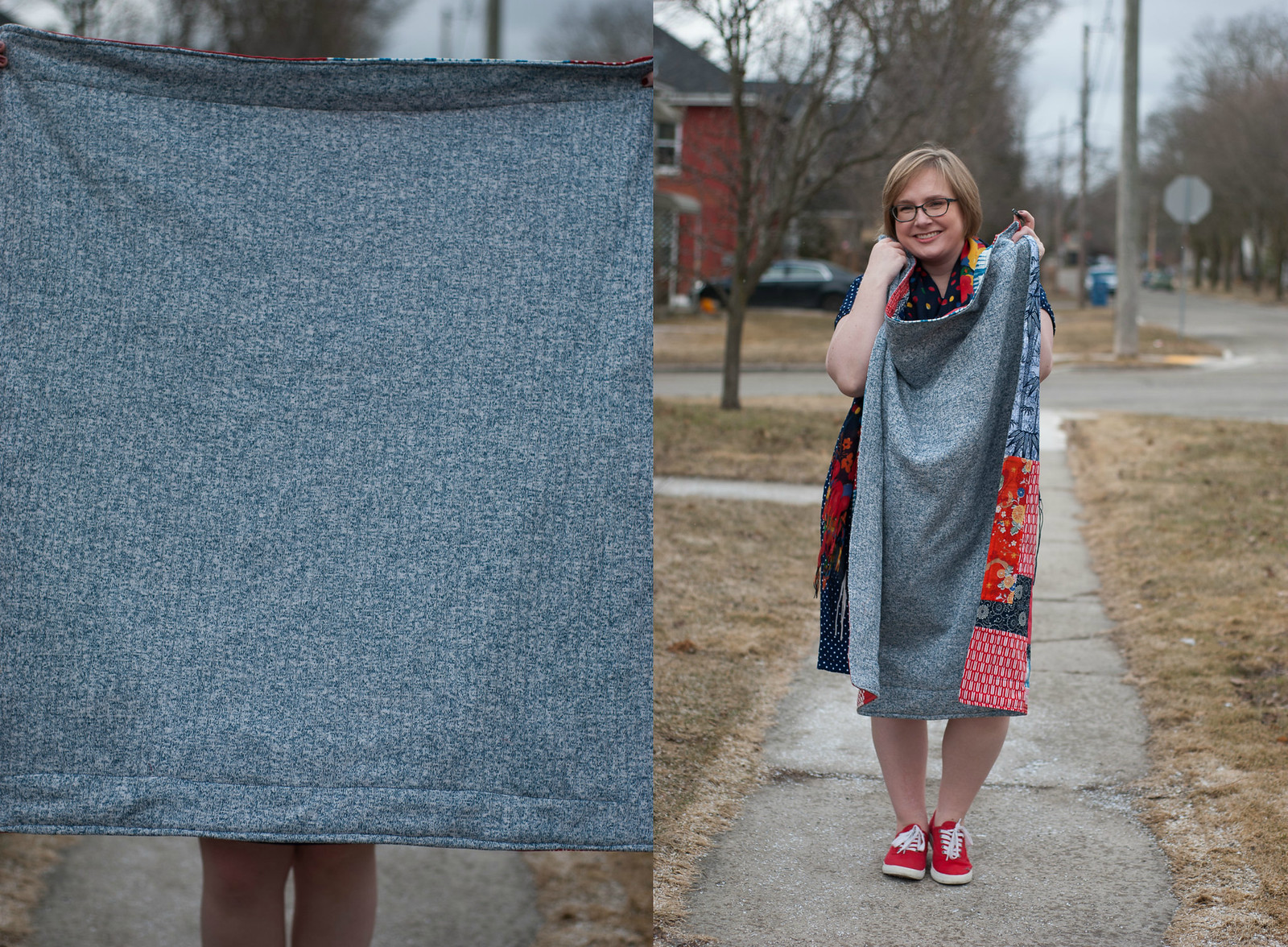 That said, I get really bored doing actually quilting and binding, so I just used some yardage of fleece sweaterknit and called it finished!

The whole reason I’m condensing my sewing into *just* one room (oh the hardship!) is to make better use of our middle room upstairs. It was my sewing room, then it morphed into a very crowded storage room/guest bedroom… and now we’re trying to make it a nicer space for my brother-in-law who often visits! It’s a temple to nerd-dom, and I think the Japanese-themed quilt fits in well. 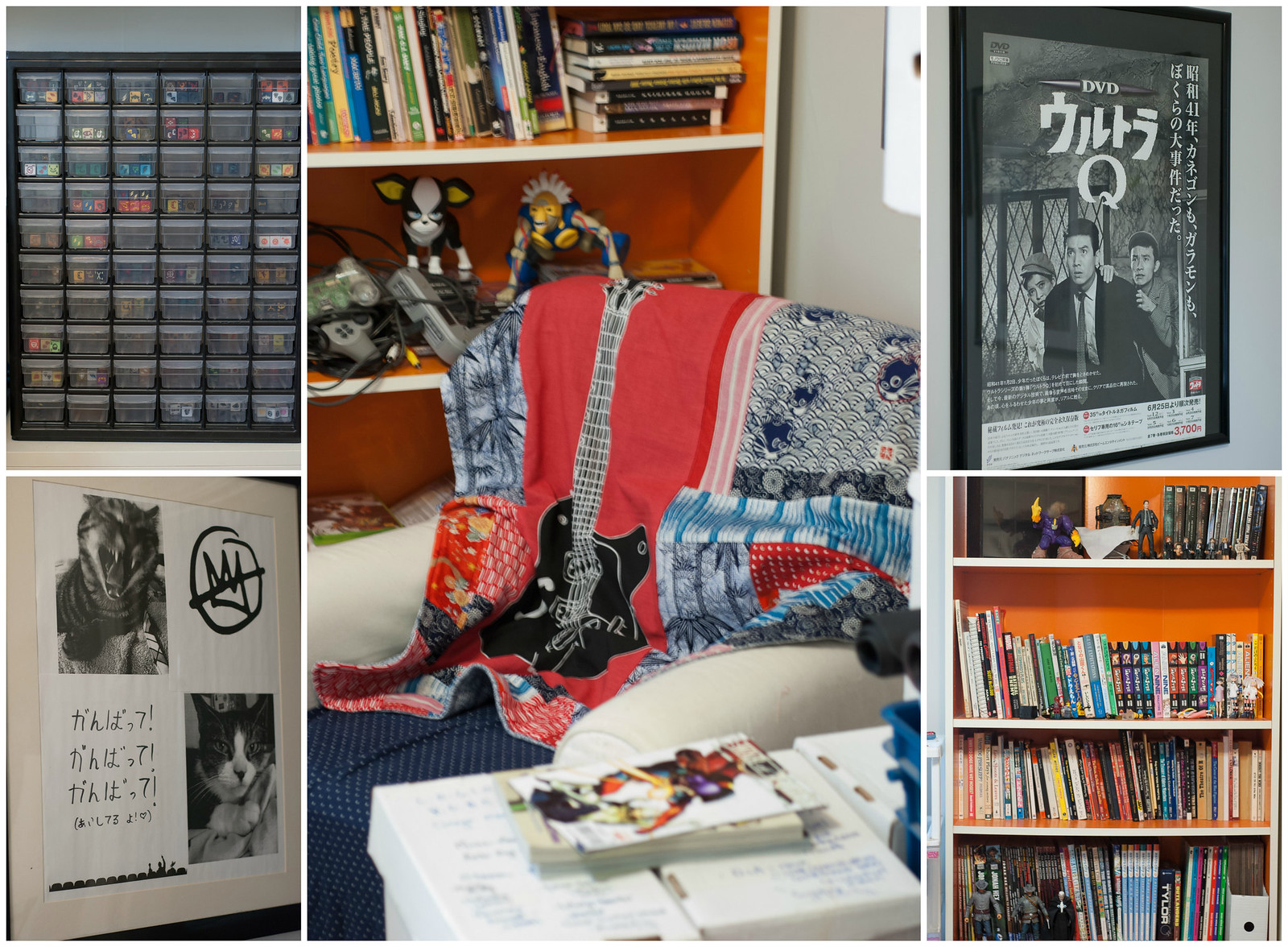 Above from top left, clockwise: 60 drawers full of dice for Dicemasters; a chair surrounded by shortboxes of comics and piles of video game controllers; a 60’s Japanese monster movie poster; shelves of comics and manga; and photos of our cats looking idiotic!

There is a great word in Japanese, “natsukashii“, which is roughly translated to “nostalgic”… but it really means something more like “fond memories”. It’s the sort of word the Japanese use all the time, when retelling anecdotes with friends or when walking by a place you use to live, and it is one of the few words that exist in Japanese that I’ve never been able to find a parallel for in English! Making this quilt and reminiscing about fabrics was very natsukashii, and good for the soul.

Have you made a palette cleanser project recently? What old stashes of craft supplies do you have lying around that would be fun to revisit?

17 thoughts on “A Quilted Palette Cleanser”