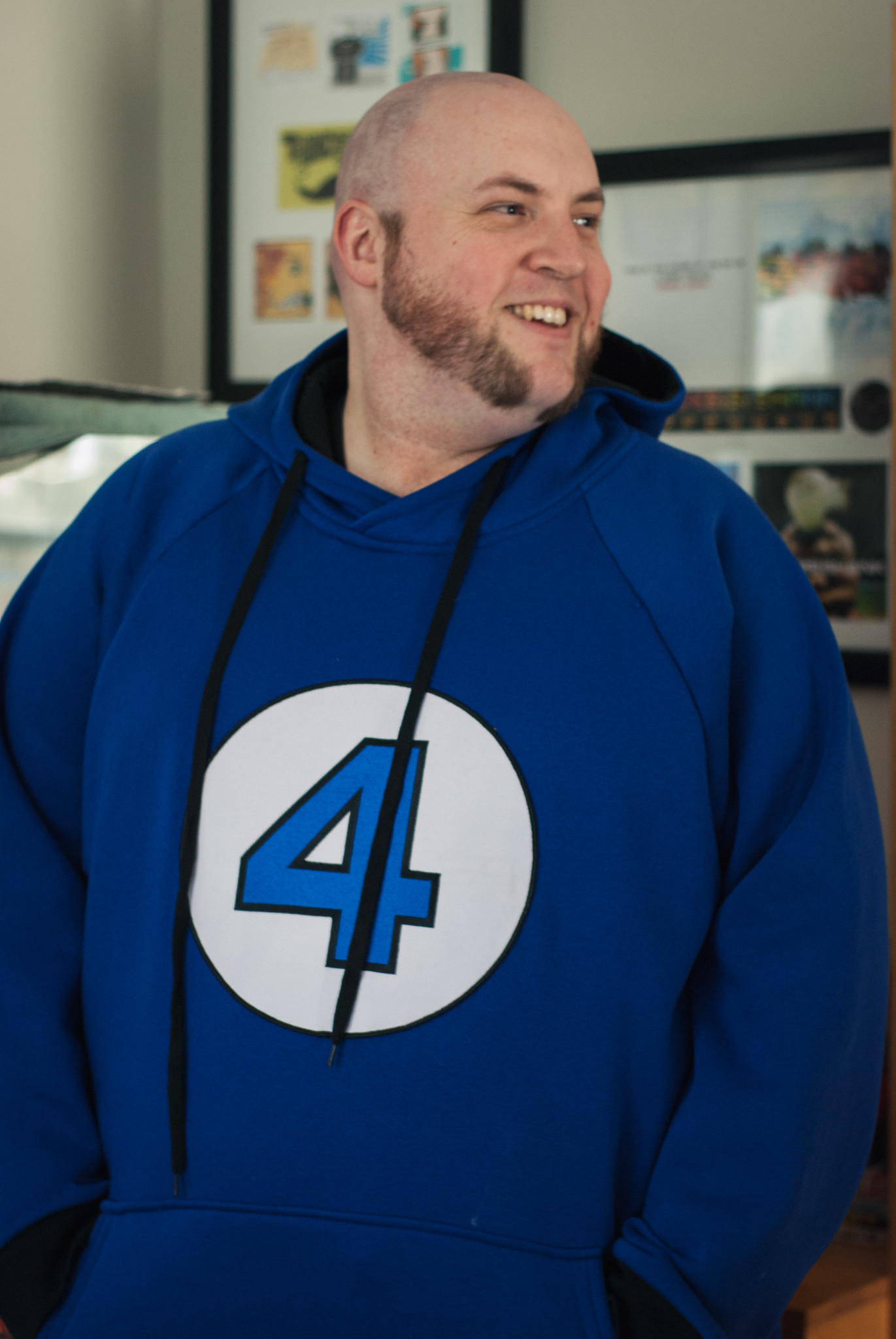 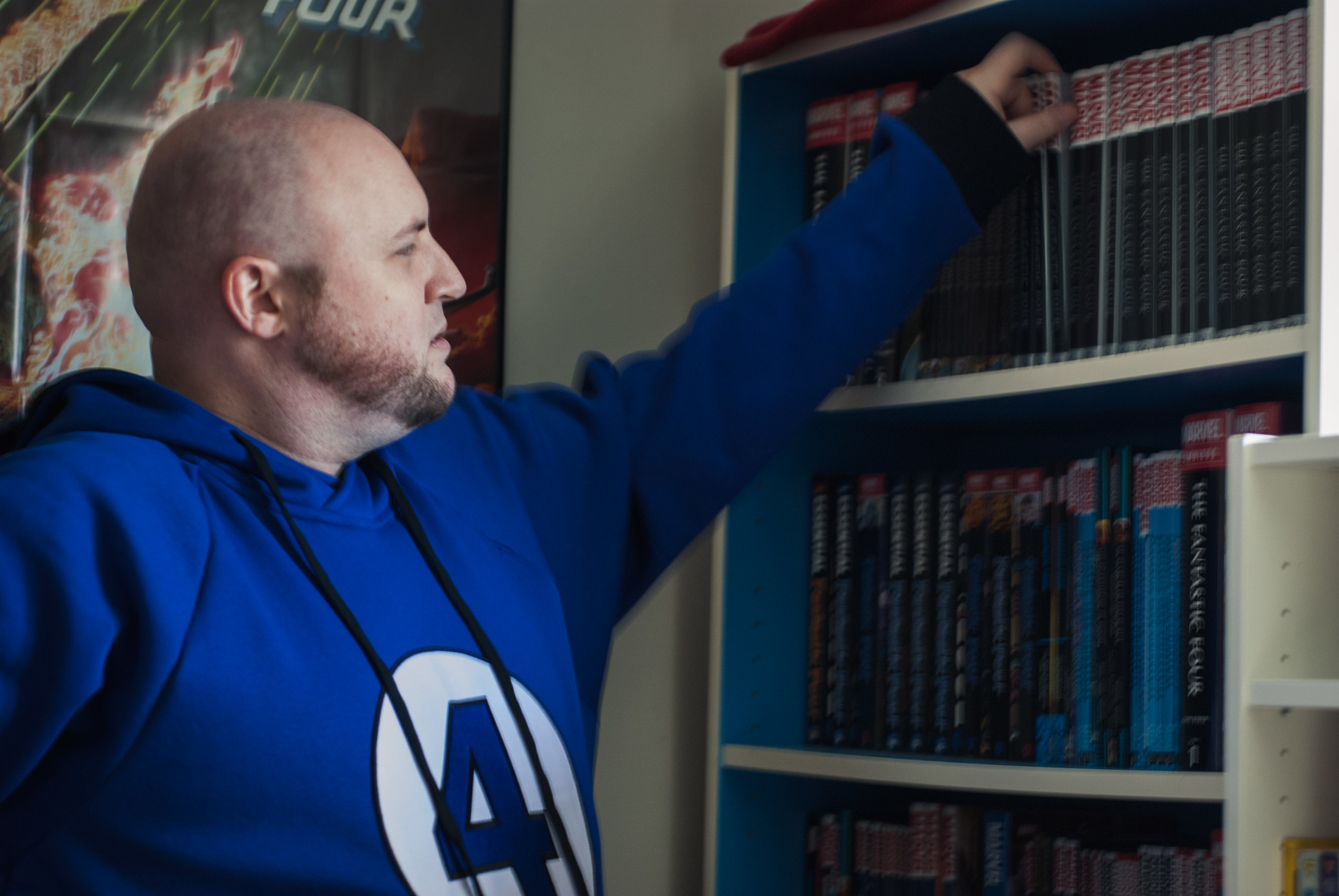 There are FF prints in our staircase, in our hallway, in our living room, AND in our bedroom! On top of that, his comic book room is awash with FF blue, posters, figures, and of course, original comics from 1961 onwards!

Why the Fantastic Four? There have been a lot of weak movie versions, so it’s not a popular or well-understood team… but in Jamie’s words,

The FF are about exploration and working to understand the unknown, both in the worlds beyond ours and in the nature of what makes strong relationships. There are adventures into unknown dimensions and mysterious worlds, and relationship ups and downs, but you can always count on the FF to solve the problem as a team.

What makes the book, and specifically the characters, so special in the comics industry is that they are a family as much as they are explorers. Not to get too metaphorical, but it’s a good way to look at life – you’re making a journey into untrod paths, and the importance of having a good partner, or partners, is what makes the adventure rewarding. Which is a long winded way of saying I’m lucky as hell to to have a wife like Gill! It’s like Reed Richards, my favourite character says: “As long as you’re with friends, there’s no limit to the adventure out there!” 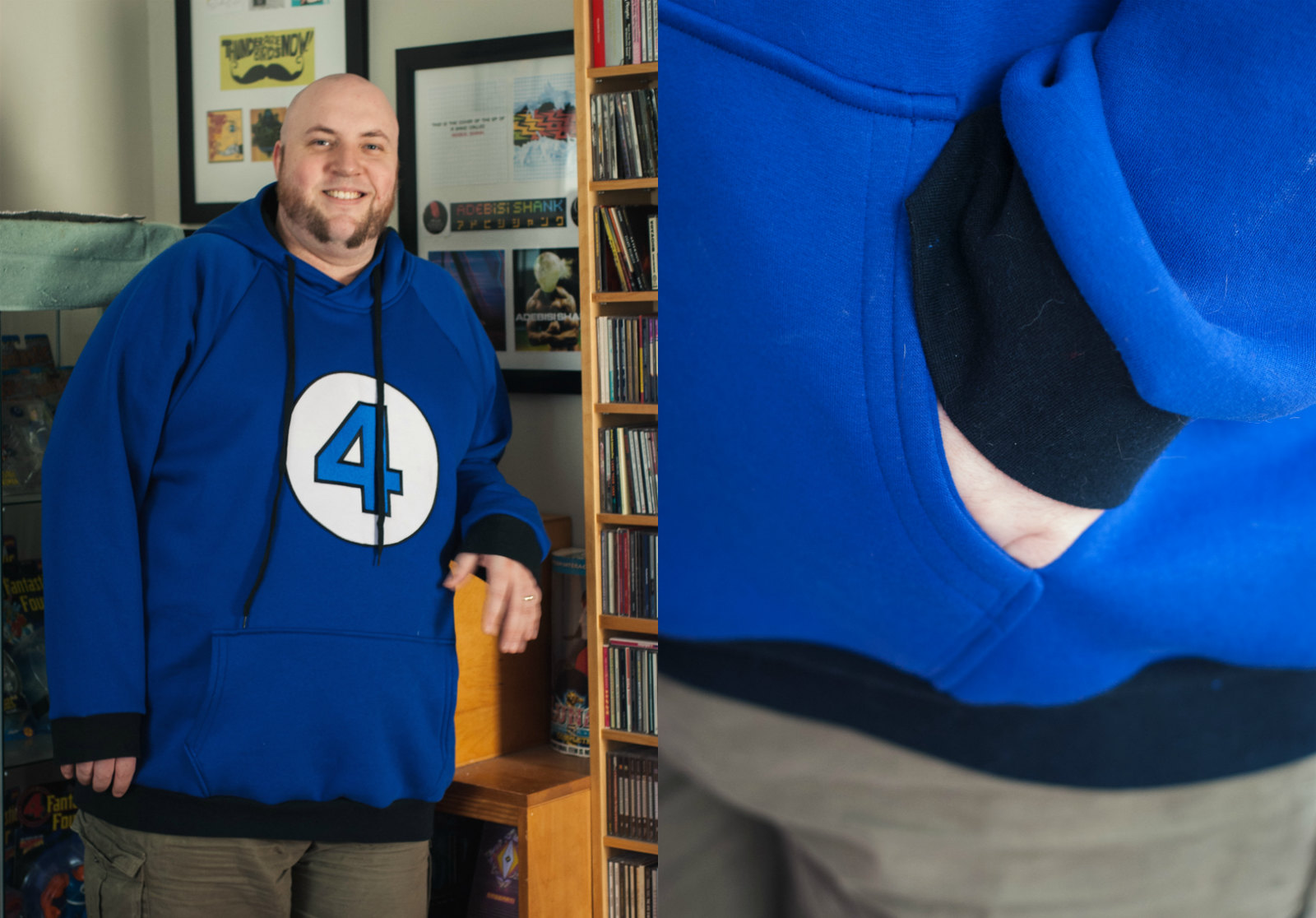 So when Jamie asked in December for a royal blue FF hoodie with black bands, I was happy to make his vision come true! (Ok, in truth, the black bands sounded hideous in my head, but he was totally right, and I love the finished product!)

The fabric and ribbing are from L’Oiseau Fabrics, which is quickly becoming my go-to store when I want high-quality knits. (If only they stocked more rayon prints!) The blue is a classic sweatshirt fabric, which had the perfect amount of stretch and stability. The ribbing is a basic black, but they also have some really neat striped options I might try for Jamie sometime! 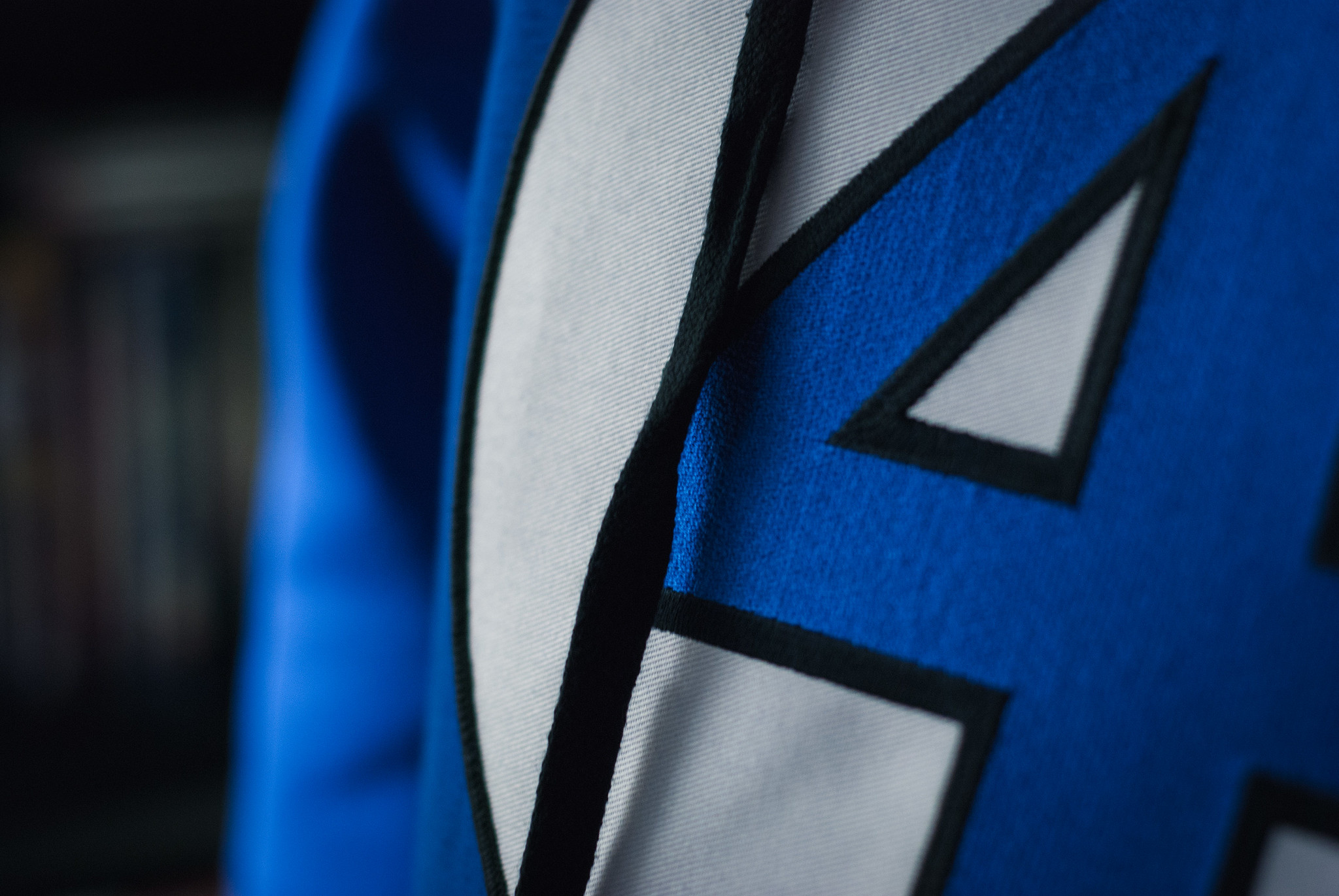 The star of the show is this massive FF patch that Jamie bought online – in fact, he bought two, so who knows where the second one will end up. The entire hoodie ended up costing about $120, which makes it the most expensive thing I’ve sewn in years… but it’s such a joy to be able to make the perfect unique item that could never be bought in stores! 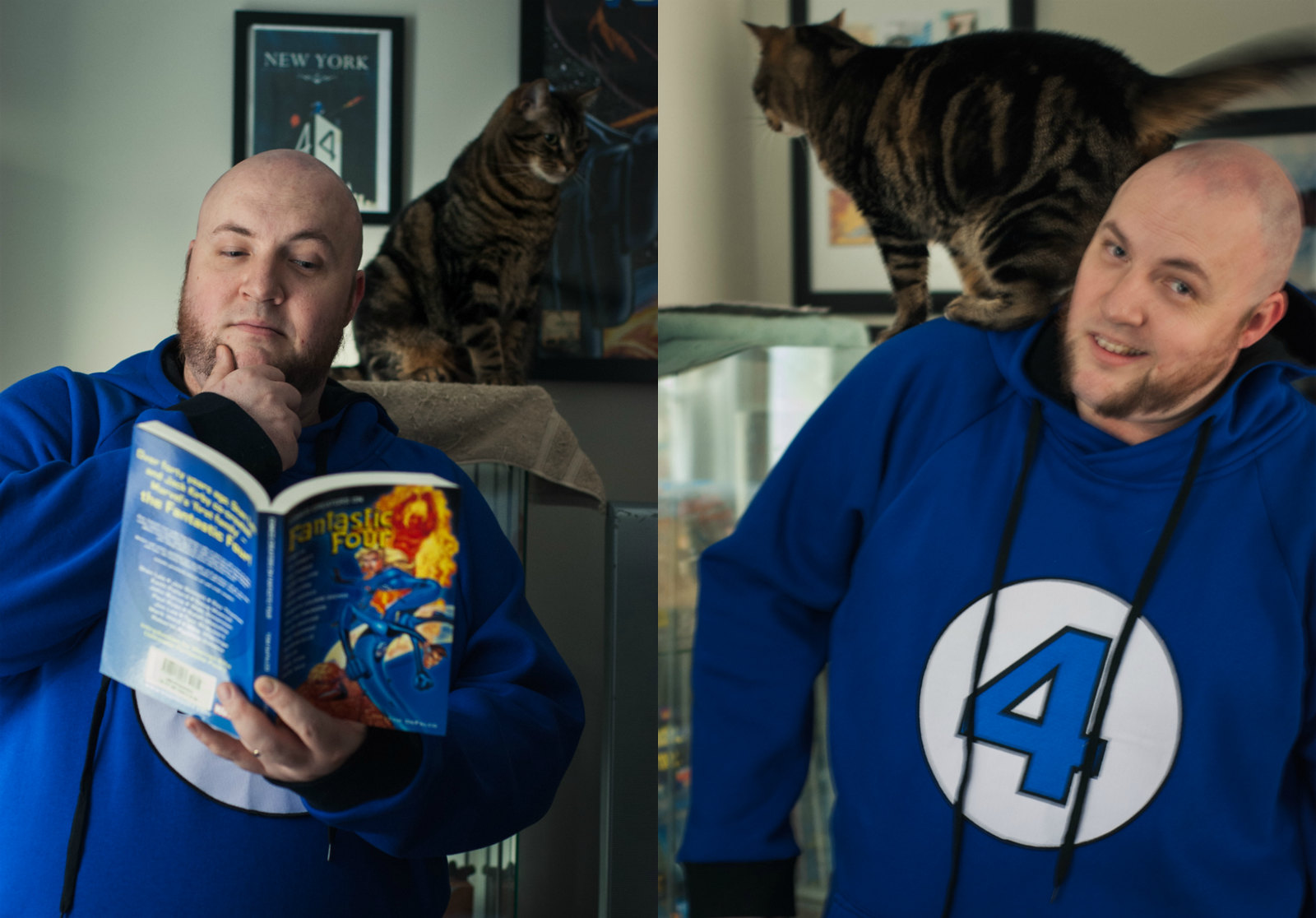 Jamie’s cat Clay approves! She was our first cat together, but once we adopted Frank he gradually took over the whole house except for the comic room, which became Clay’s lair! Our vet says Clay is “ripped”, with the abs of an outdoor tomcat, so clearly it suits her jumping all over the pathway of shelves that Jamie has arranged for her amusement!

As you’ve probably guessed, the pattern is the FreeSewing Hugo Hoodie. After I tested the pattern for myself, I made Jamie a wearable muslin and a zip-up windproof fleece jacket version before cutting into the precious blue fleece. The zip-up version is in daily rotation as a jacket, but it’s black and pretty much impossible to photograph, so you’ll just have to believe me on that one!

He had a few of the same fit issues and solutions that I had:  the hood was absolutely massive, and the armscye was too low. Easy to fix though – I used my size of the hood, and cut it down1″ in height, and I used a french curve to turn the bottom of the sleeve into a curve instead of a straight line. I also made the pocket taller, so that he could have the extra length he likes in the hoodie, but still have the pockets at the right length for his hands!

These are Jamie’s interpretation of my classic blog poses! 😉

I’ve been sewing Jamie hoodie for years from a tracing of RTW, which works fine but doesn’t have the same nice finished details as the Hugo. I love the lined hood, clever pocket, and I think the raglan sleeves make his shoulders and pecs look particularly sexy. I’m so excited to know that the drafted-to-measure patterns at FreeSewing will work for him, and we’ll definitely try more in the future! 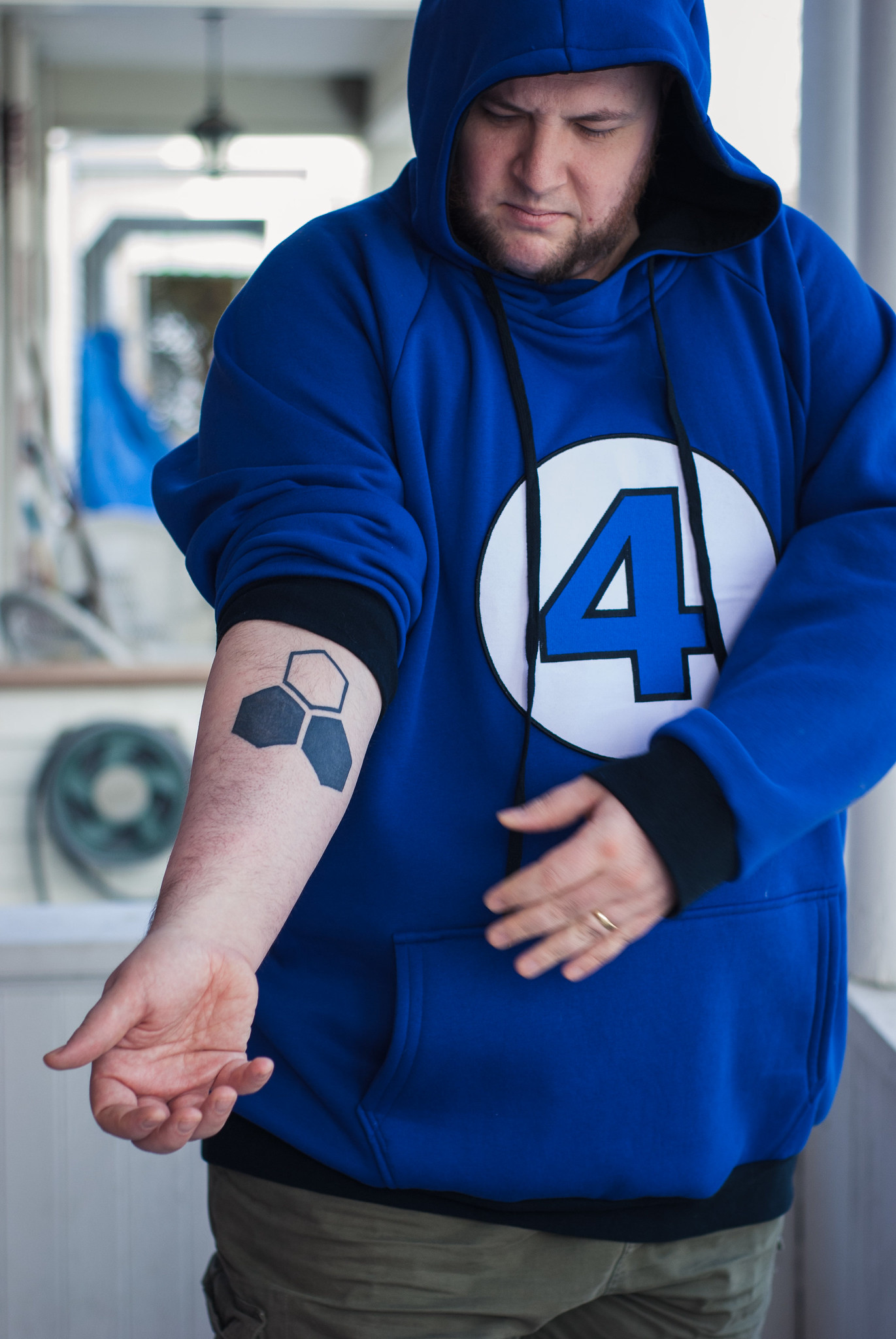 What’s that? BOOM! A Fantastic Four tattoo! I showed you my matching one back in the fall. The family that nerds out together stays together, right? 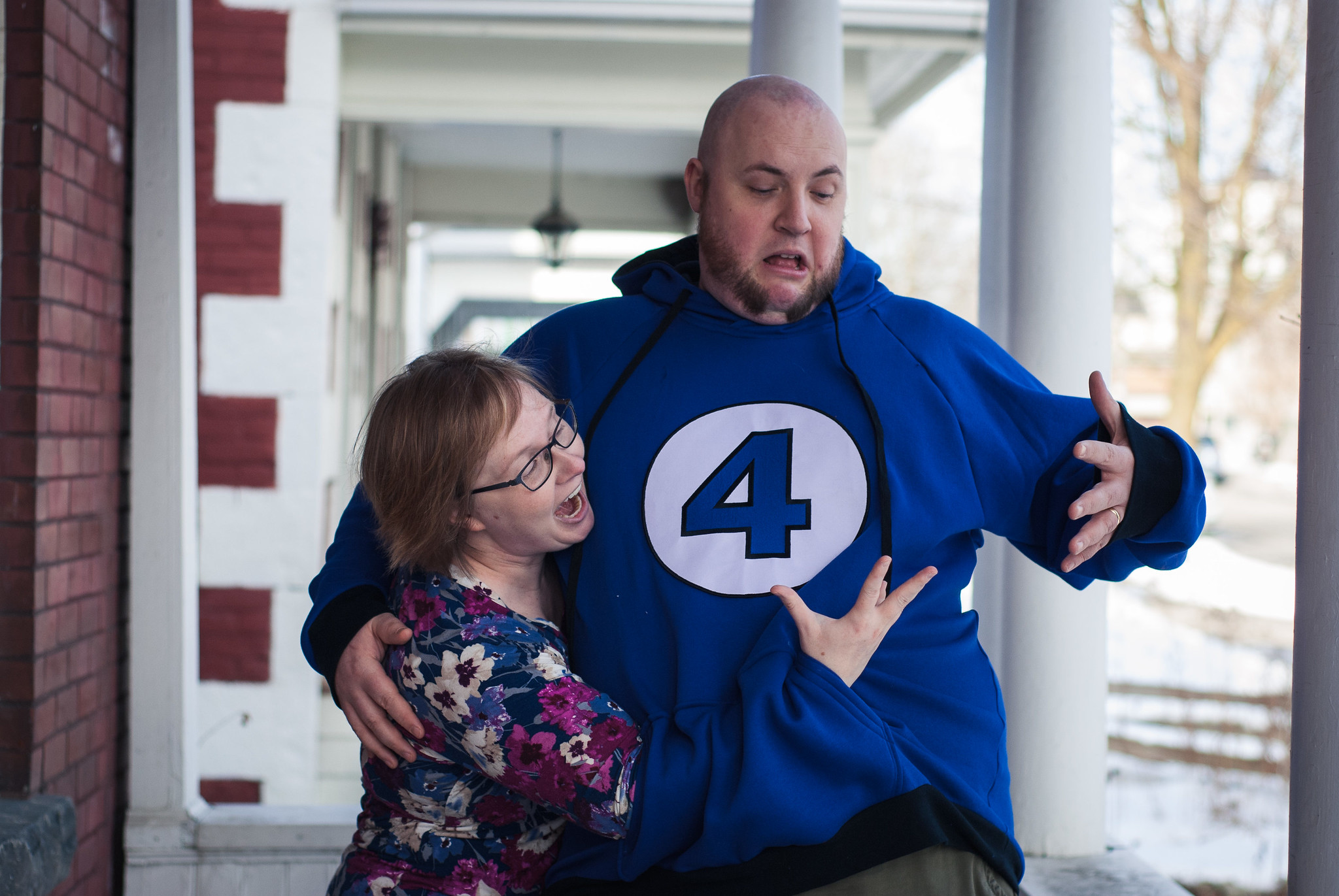 Attack of the pocket monster!

Thank you to Jamie for being a first-time model here on the blog – what a nice way to mark my 6-year blogging anniversary!

What’s the nerdiest thing you’ve ever sewn? Or put another way, what idiosyncratic fashion dreams did you bring to life for yourself or someone else?