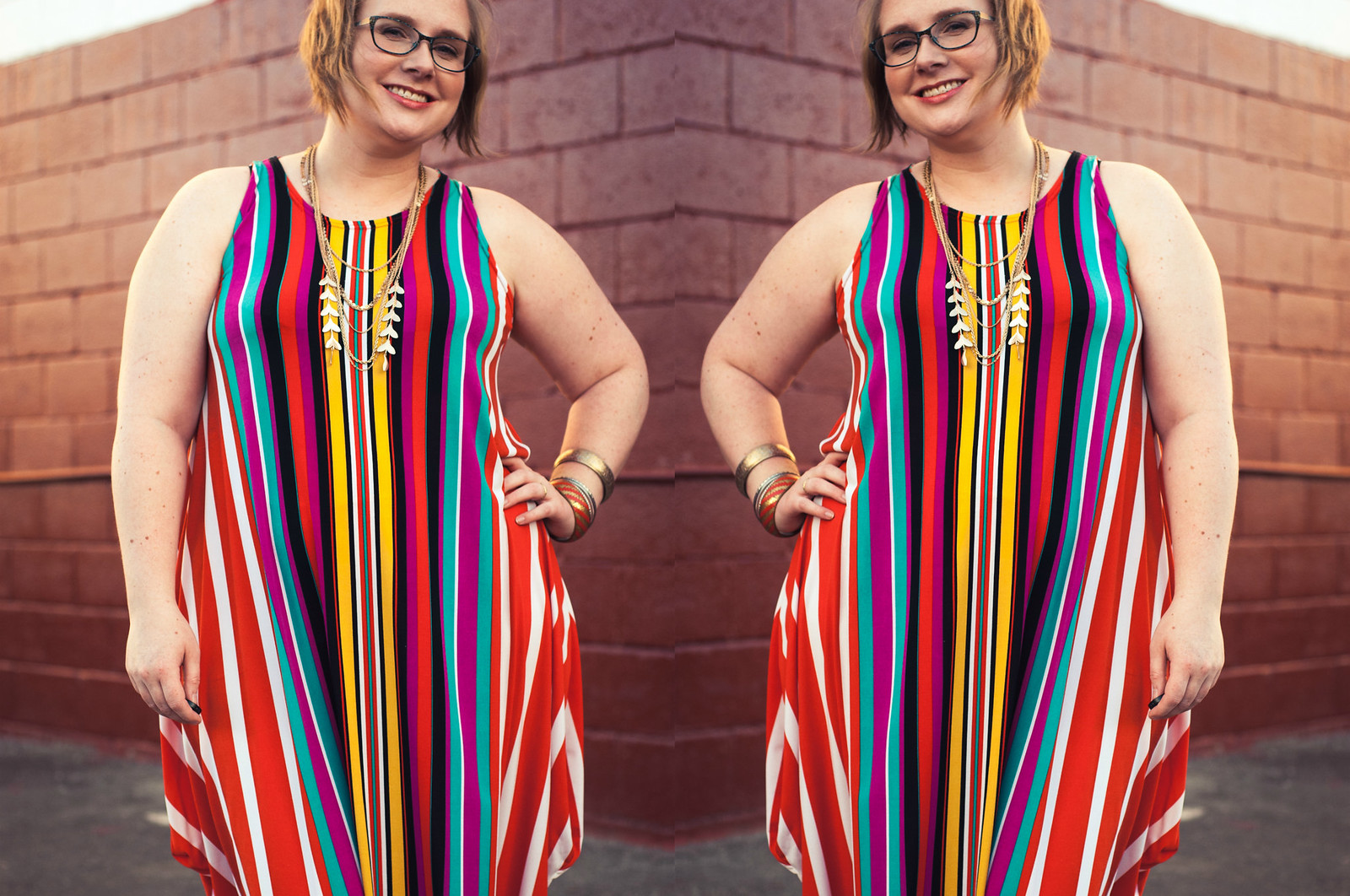 I love this dress. It’s my ideal combo of too-crazy-to-be-sold-in-stores but still comfy, bright and cute! I would wear this to work or to a music festival, and feel badass either way. 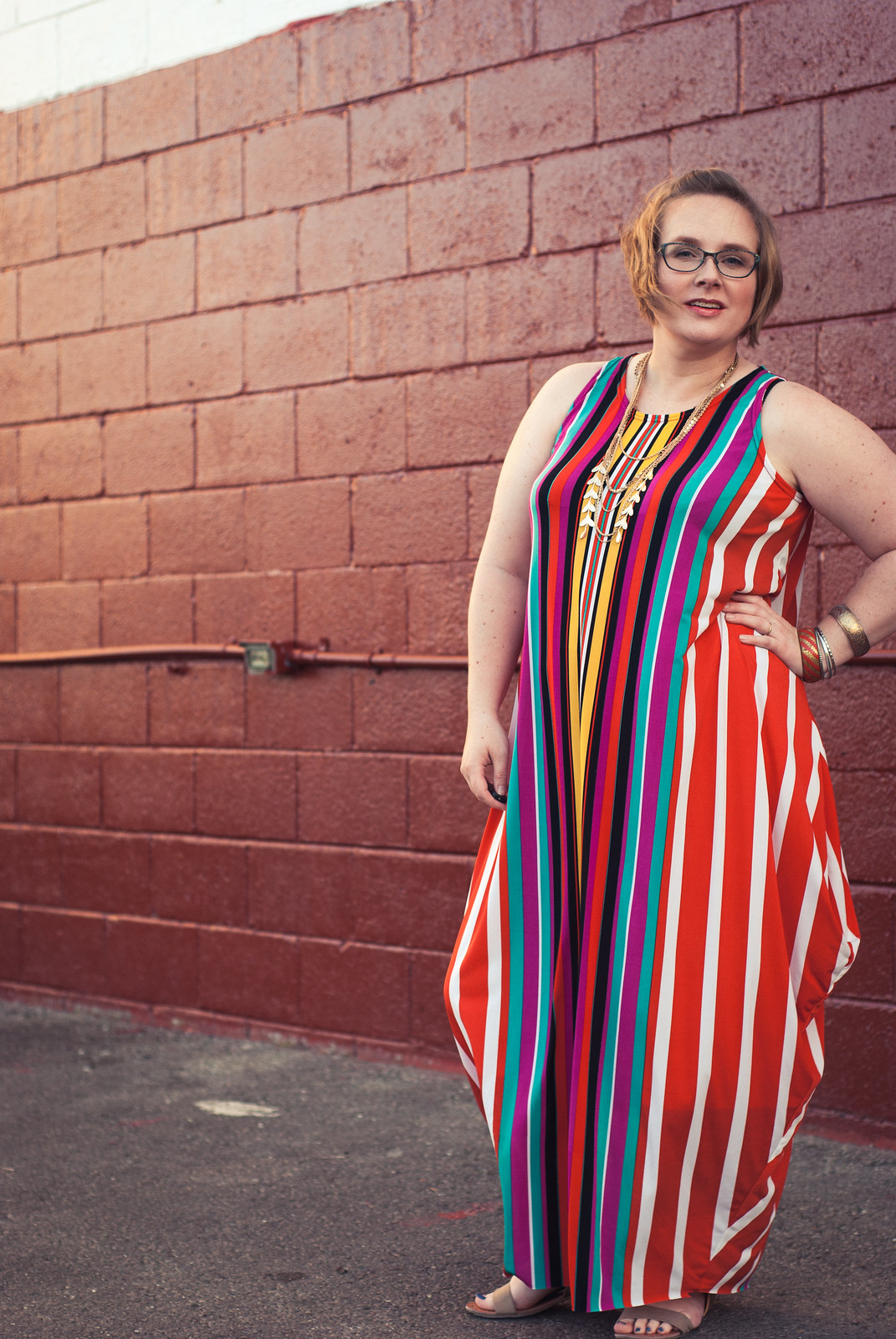 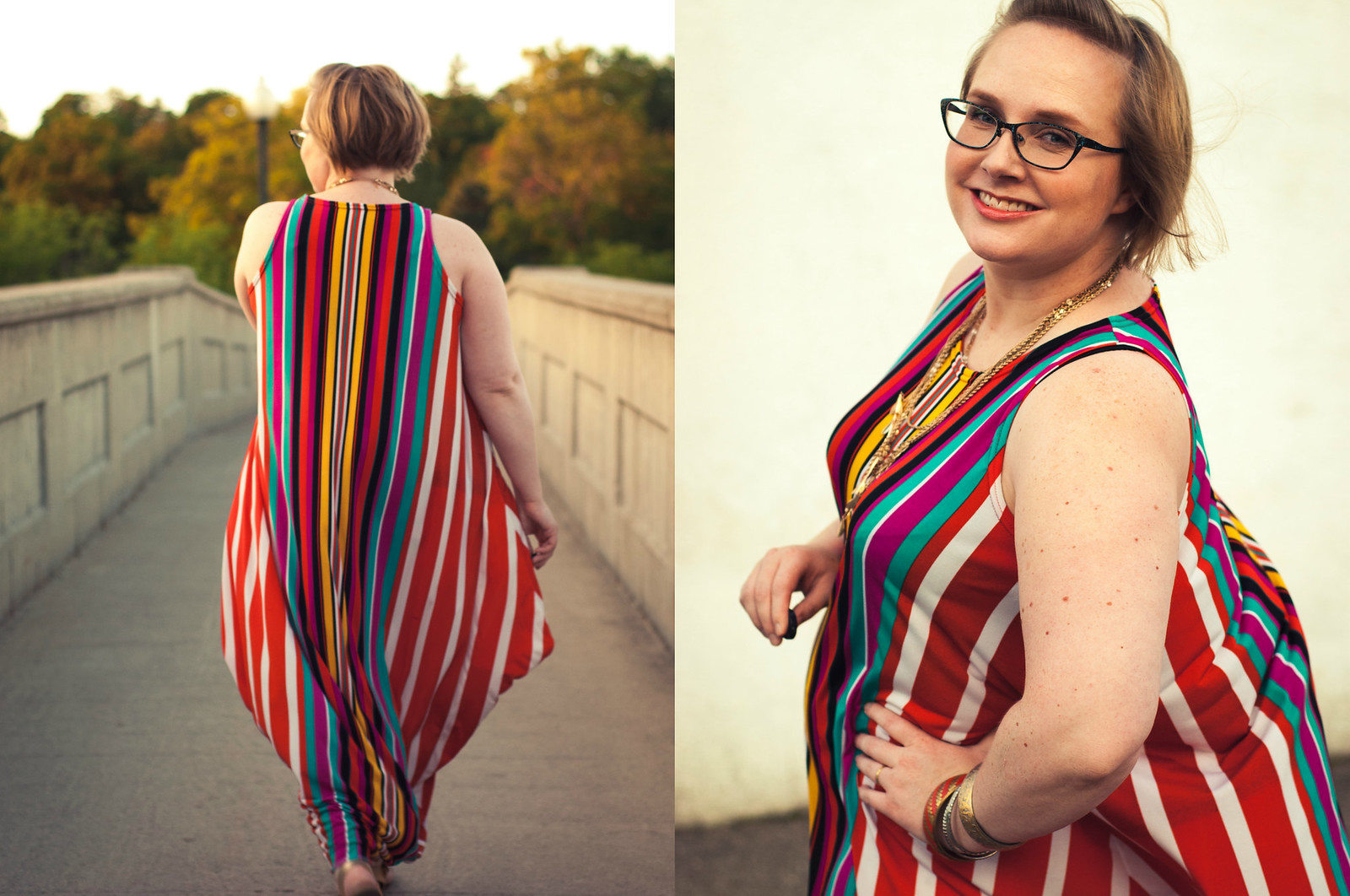 I’ve had this cocoon shape stuck in my head since rewatching Amanda Valentine’s season on Project Runway earlier this summer. She did a series of cocoon-shaped maxi dresses which I loved.

When I found this ITY knit, I thought the large-scale print was perfect for a really bold maxi! The fabric was actually a border print, with the multicoloured stripes running along one selvedge. I wanted them centred instead, so hidden in the dress is a sneaky seam attaching more orange stripes to make it symmetrical! 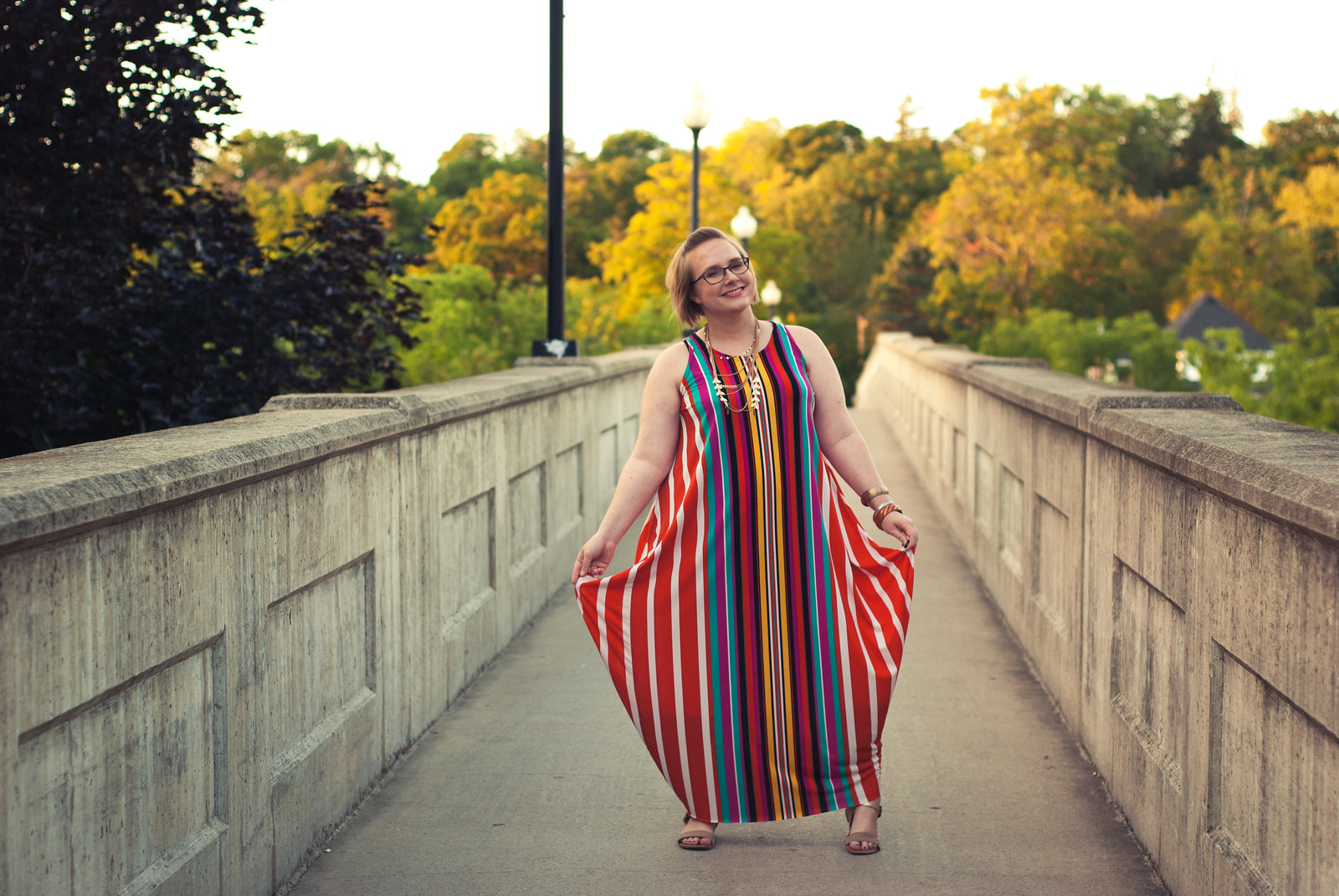 If you know me well, you can probably guess the pattern I used for the shoulders: Hey June Santa Fe! I wanted something I knew would fit well, and the cut-in shoulders continue the overall diamond shape of the dress. From the armscye, I used a straight ruler to angle out the side seams, then angle them back in just below my fingertips. No scientific reason for the height of the angle – I just wanted it far enough below my hips that my hips weren’t the widest point! 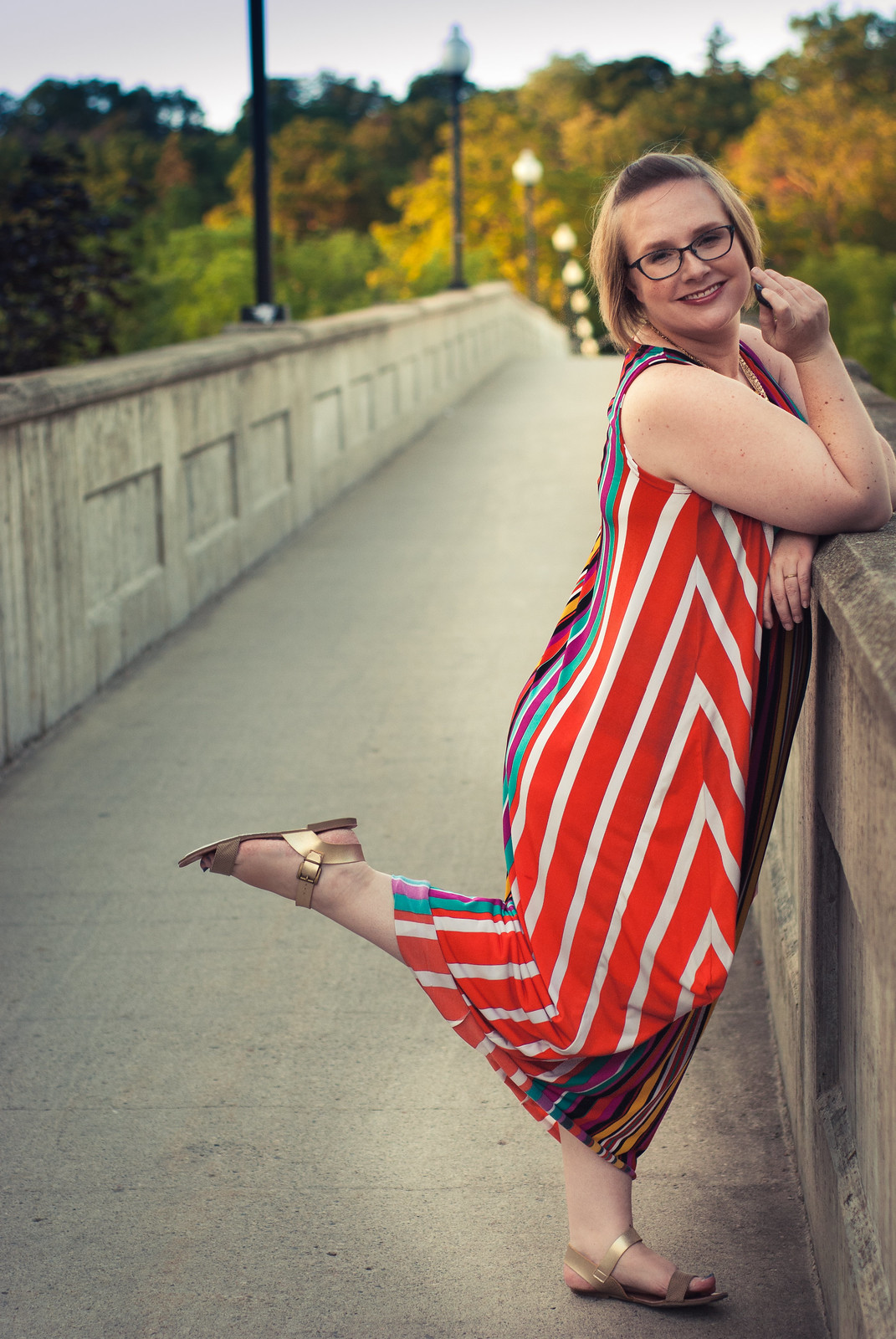 I was planning to put a centre-front and centre-back slits in the skirt, but I decided not to for a few reasons. First, I hate fussing sewing, and was afraid of trying to get the slit perfectly finished and following the stripes exactly! Second, the ITY tends to collapse on itself and not hold a shape, so a slit would fold over itself and look messy. The hem of the skirt is about the same circumference as my hips, which seems to give the right amount of walking easy! I didn’t even bother to hem it. 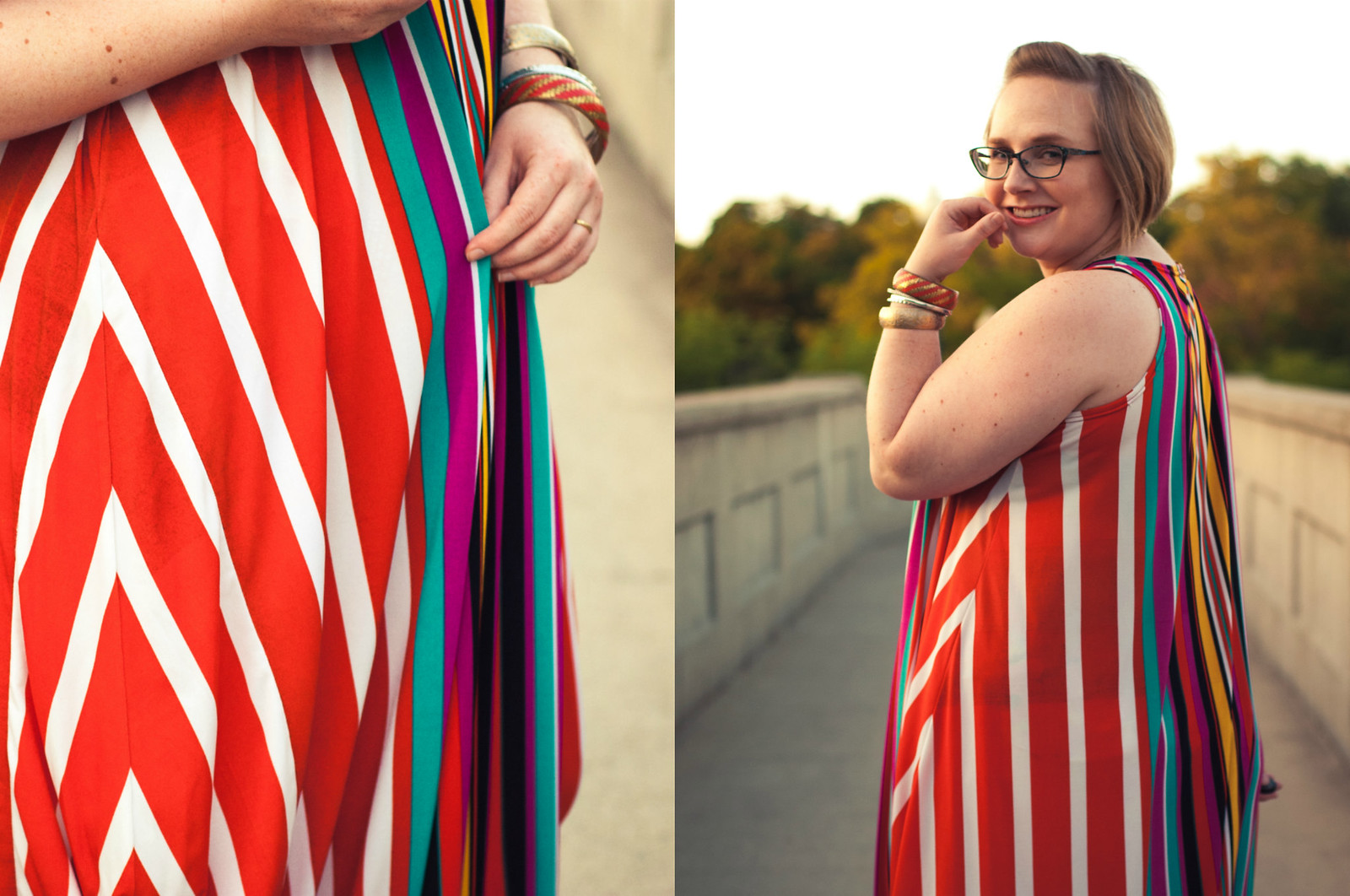 In the right-hand picture, you can see that there is a slight flaw in the fabric. there are bands of blackish colour going across the orange stripes every half metre or so. I didn’t notice it when I bought the fabric, and I chose to ignore it. With so much going on in this dress, I hope that most people won’t notice it! 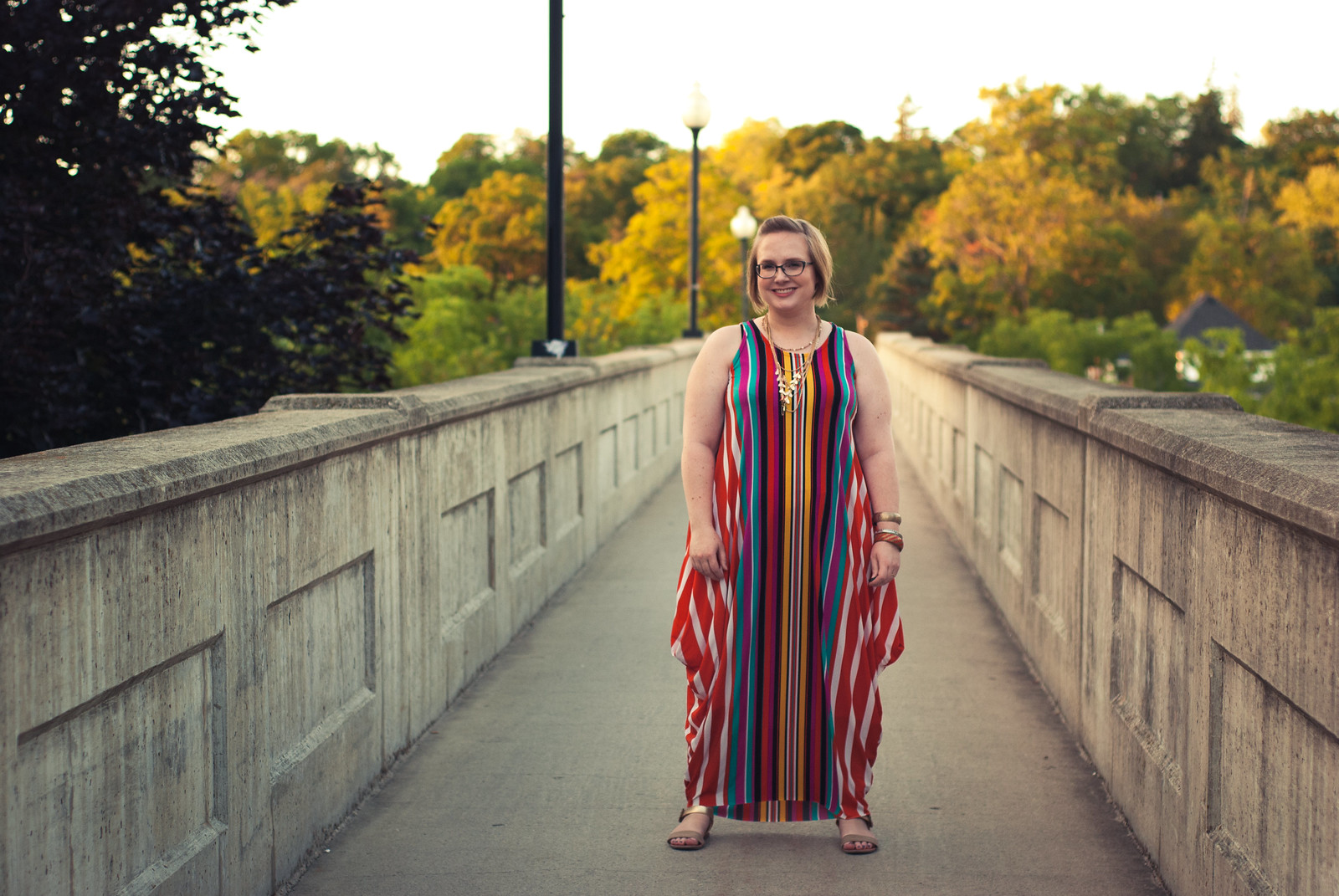 I had a lot of fun taking these pictures – wearing glam make-up, tons of jewellery, and taking tripod selfies just outside the downtown core of my city! So many people walked past – and as always, I just walk over to the camera as they approach and pretend to look intently at the viewfinder as if it’s a totally normal thing to do! It took me 4 locations to find the right light – I love golden hour, but I don’t have the skills to handle direct golden sunlight. Once the sun set behind the hills, boom, perfect light! Lesson learned: don’t rush the light. 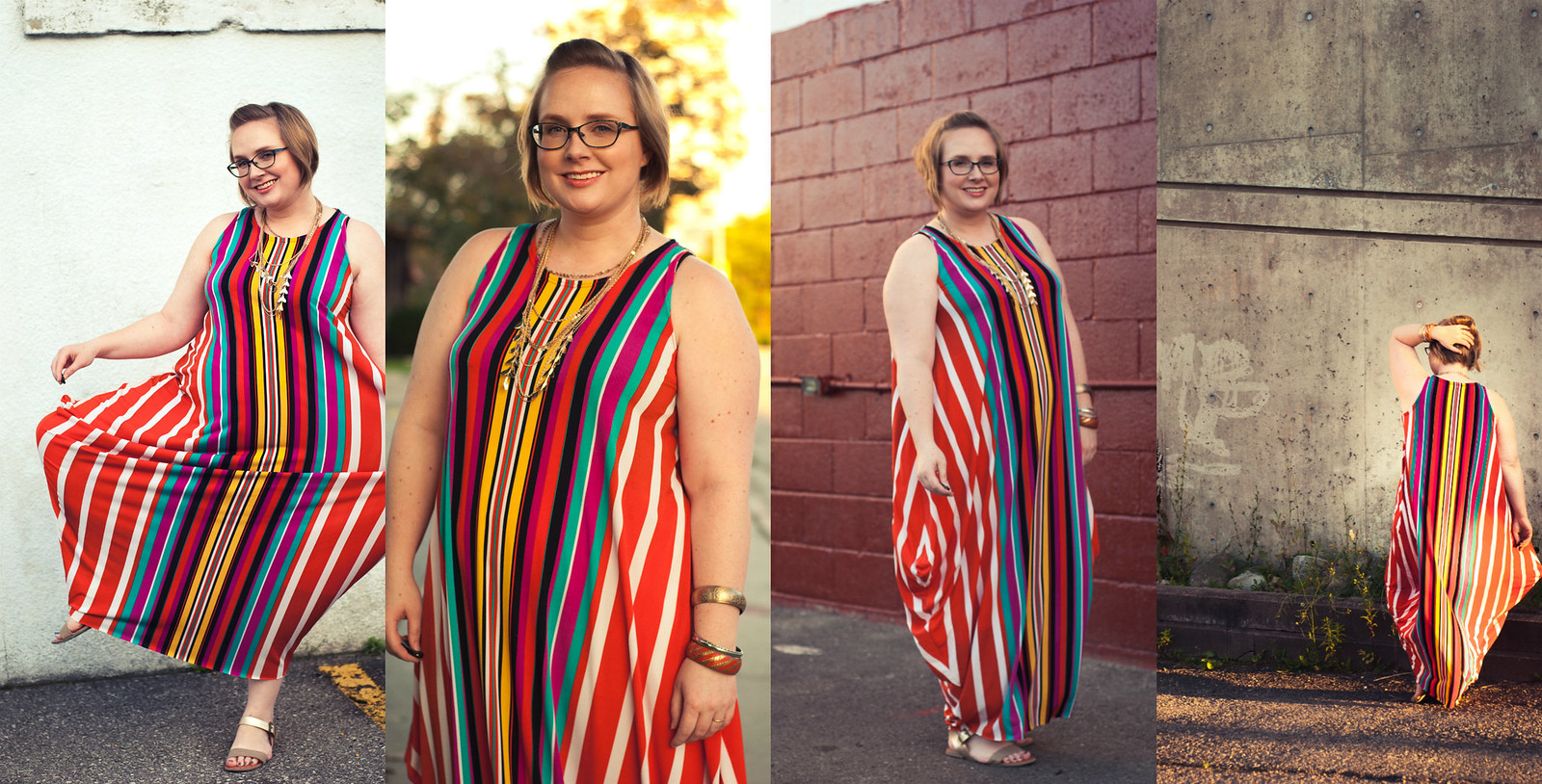 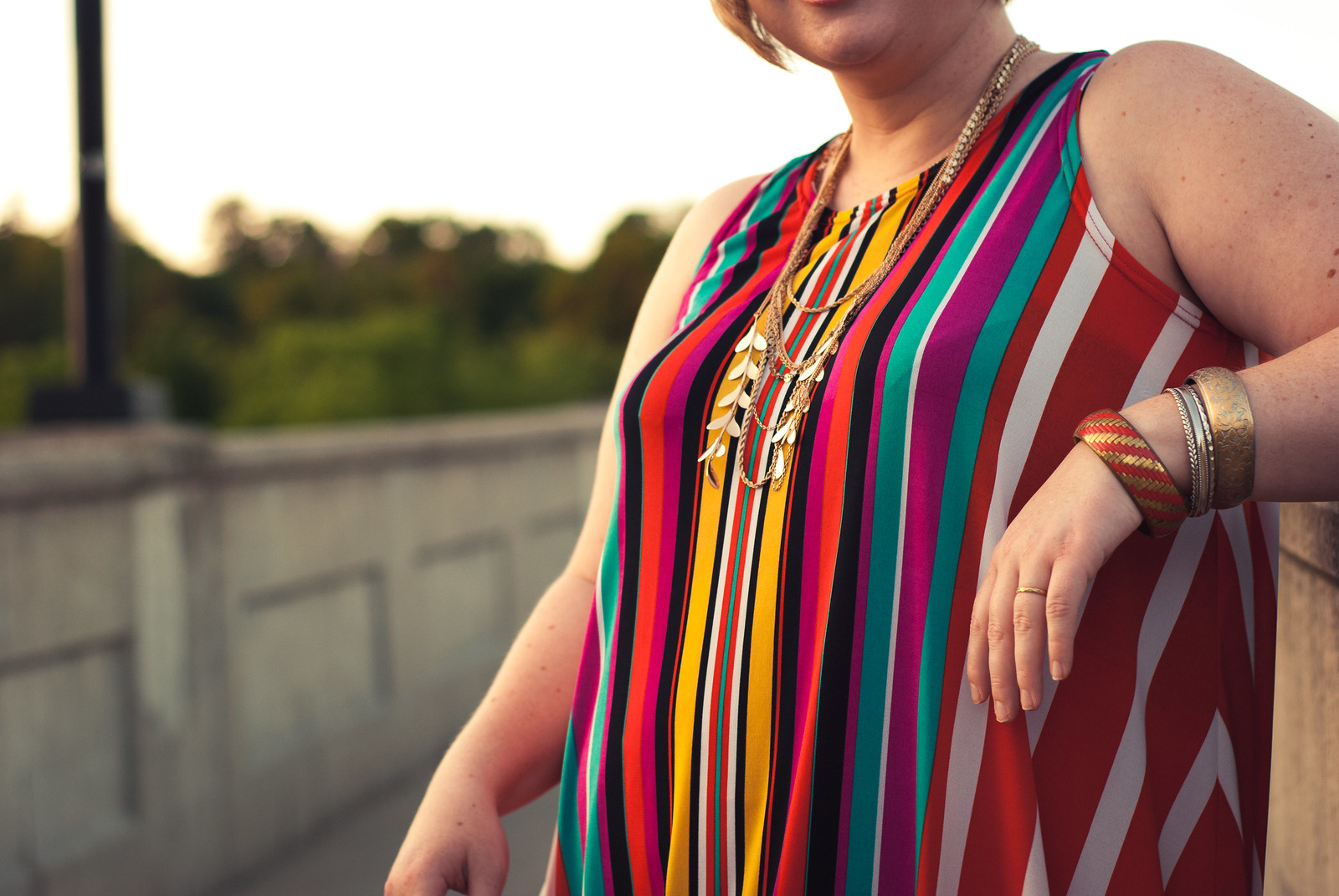 I’ve been watching lots of Lightroom tutorials lately, and I had grand plans of doing dramatic orange-and-teal edits to these pictures… but I couldn’t find a cool-coloured background wall to make that easy! I’m wondering about doing a Better Picture Project miniseries about trying out editing techniques from specific tutorials – do you think that would be fun? In the end, I split-tone the highlights to a warm yellow and the shadows to a cool purply-blue, with matte blacks, and I’m digging the more-dramatic-than-I-usual photos!

Now of course, this is a Tribute Month project, and my second tribute to Marcy! It wasn’t based on any one particular dress, but I wanted to capture some of her fashion fearlessness and joie-de-vivre. Here was my planning sketch: 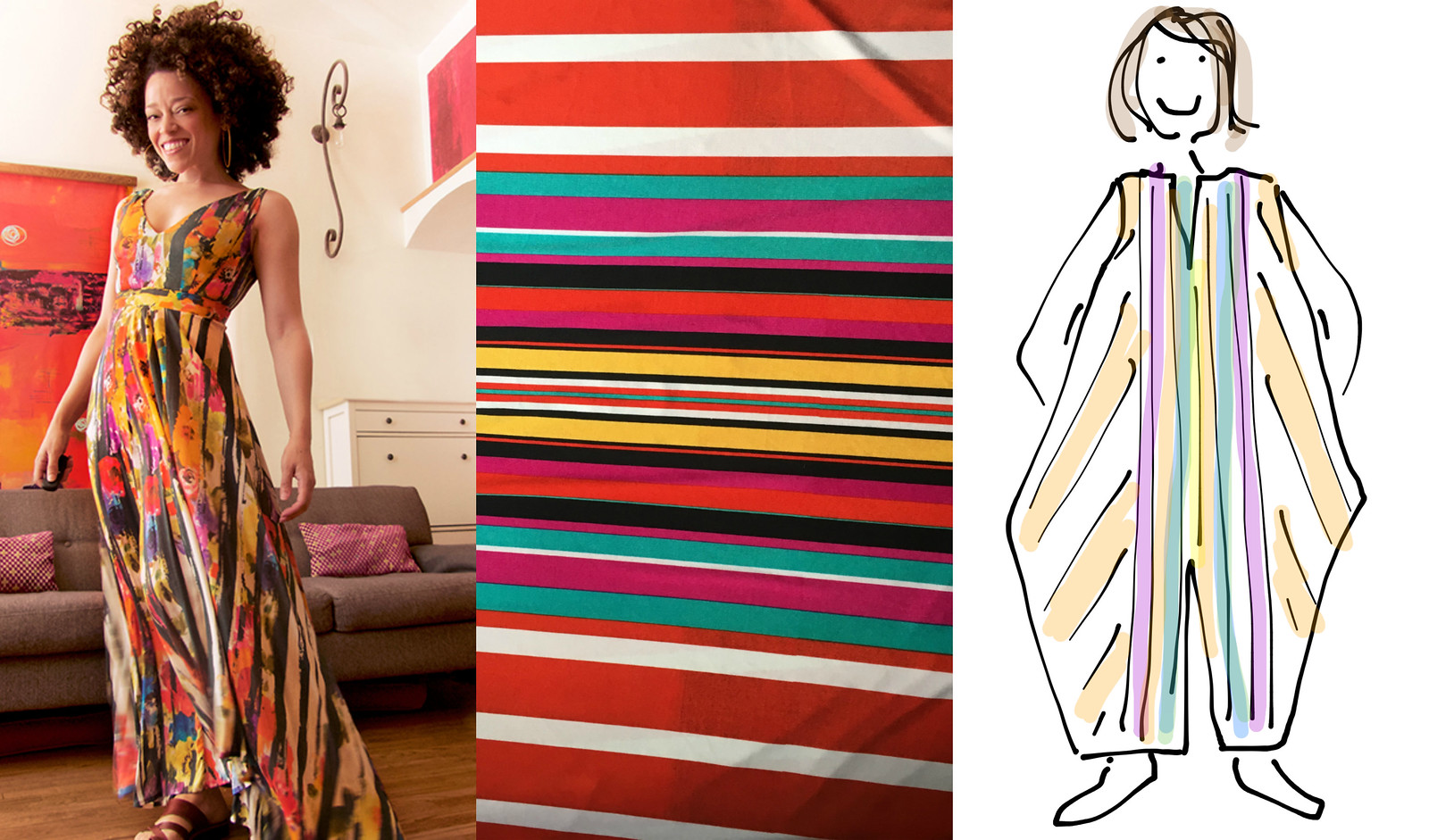 Marcy posted her own Tribute Month project on the Sewcialists blog last week, and my jaw dropped when she mentioned me as an inspiration to wear florals. No matter how long I blog, I still feel like that kid who had 11 followers, and I’m shocked when people even know who I am. Thank you, Marcy, and thank you for letting me take you as inspiration not once but twice! ❤ 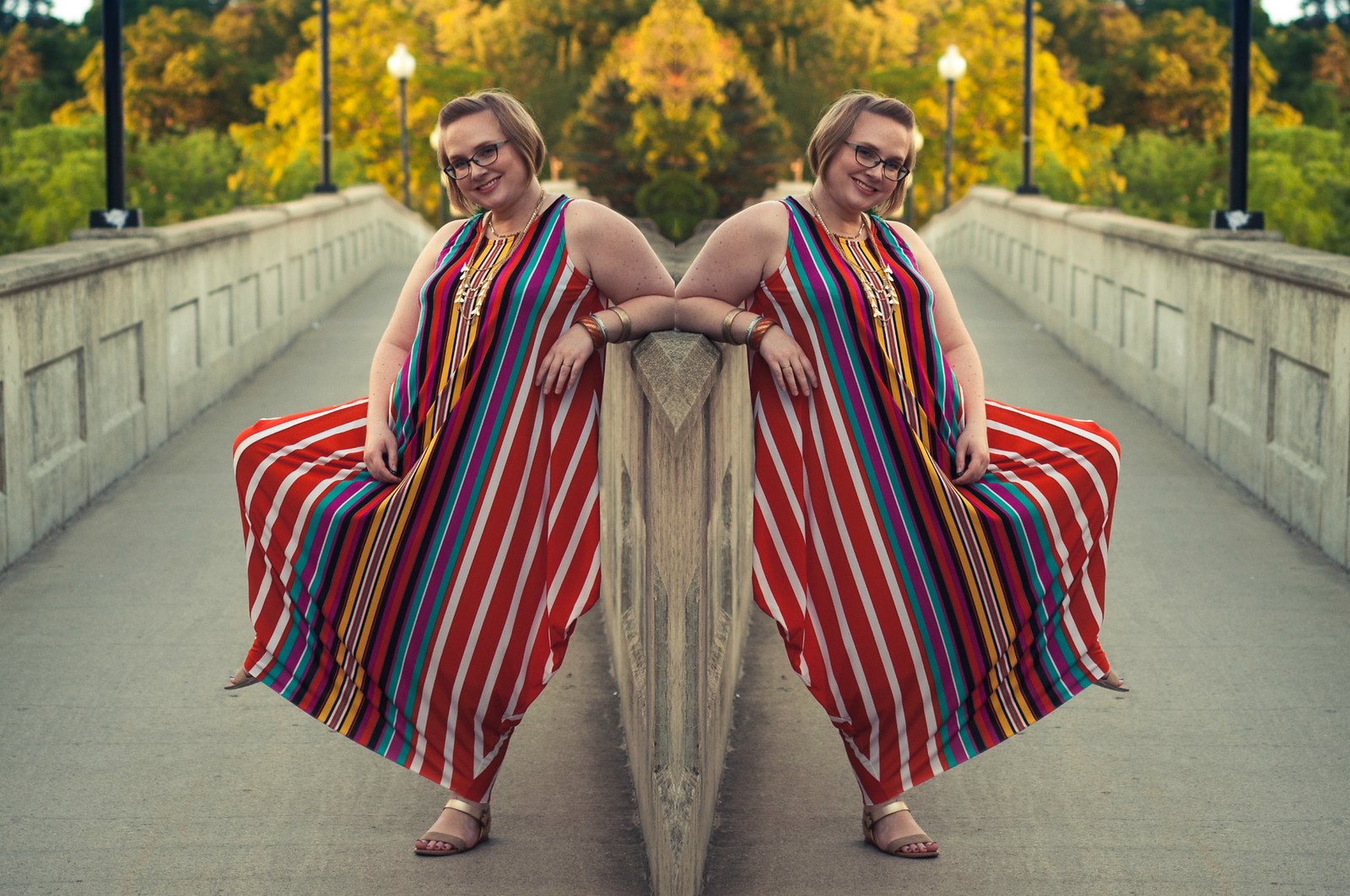 As Tribute Month wraps up, I want to say how honoured I am that so many people took part! The Sewcialists had more volunteer authors than we could accept, and there is a tremendous team of 30 volunteers in the Facebook group who are stepping up to write posts, edit, handle emails, and plan for the next theme month. Every single one of the bloggers submitted fantastic posts on time (or early!) and there has been lots of activity on the Instagram page. I’ll say all of that over on the Sewcialists blog too, but I wanted to thank you, my readers, for really making it possible! If you didn’t read and subscribe to the Sewcialists when I announced it was back, our community would not have gotten back off the ground! Thank you.