I’ve been sewing bras for a few years now, but somehow I skipped that simpler version: the bralette! I never thought that could give me enough support, but I’ve been increasingly tempted by the idea of something with no wires that dig in by the end of the day. As I headed to the cottage last week, I decided: NO MORE WIRES! Let the boobs go free!

How did that go? Well, I made three versions over three days, and none of them fit quite right… but dammit, I think I’m hooked! 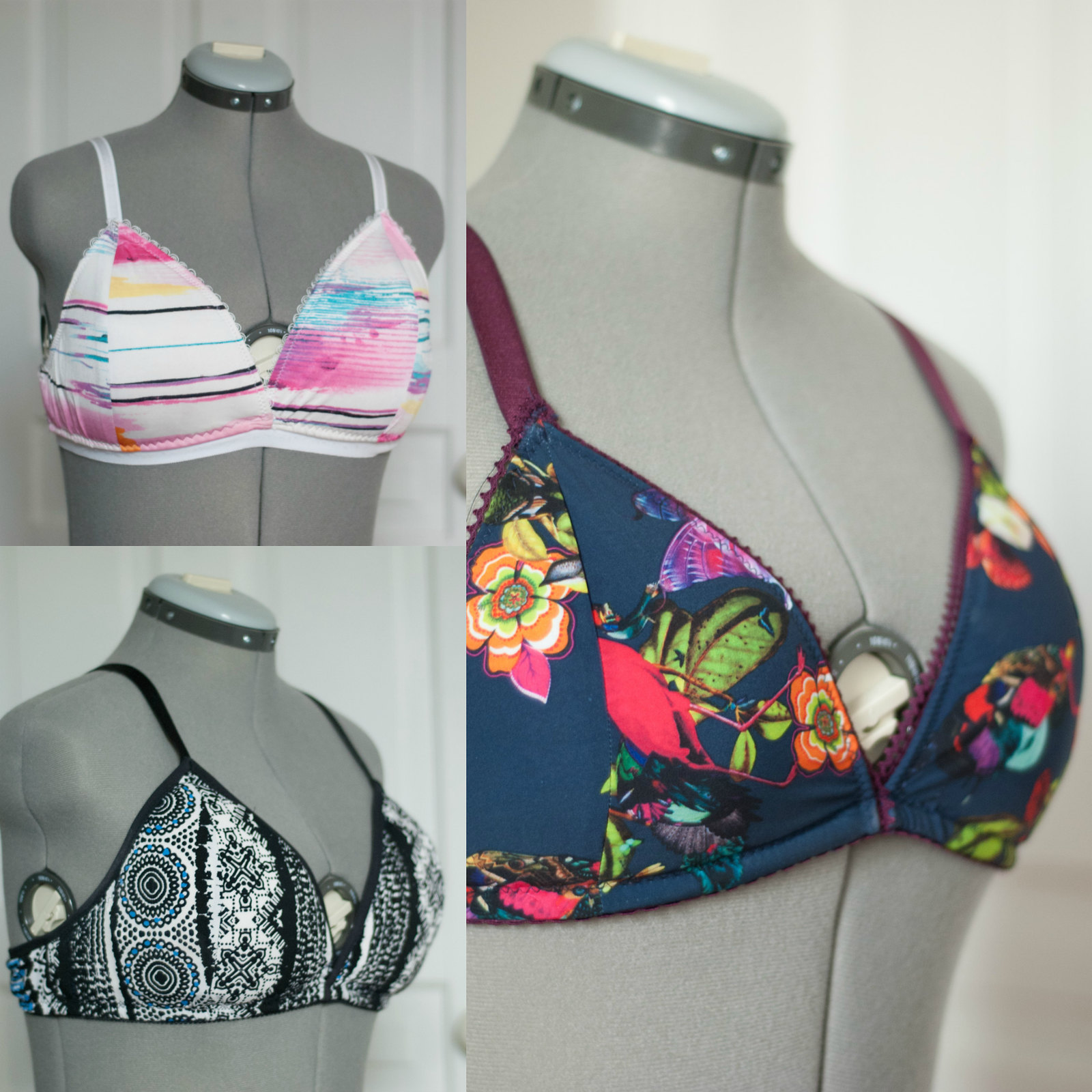 I chose the OhhhLulu Scarlett Bra as my pattern because I liked the combination of racerback style and plunging front. It’s a style that used to work well for me in RTW, so it seemed like a good starting point! I’ve followed Sarah from OhhhLulu online for years, and I like her from our interactions there. (Bonus: She lives just two hours away, so I feel some local pride.) My full bust just fits the largest size, but unfortunately it’s one-cup-size-fits-all, which is likely where my fitting challenges began!

(That said, I’ve never made a wearable bra on the first try at any pattern, so I don’t specifically blame this pattern!)

For my first version, I grabbed some scraps of black and white IY from the sewing room floor, and lined the cups with cotton lycra. I lined the band of all my versions with sturdy powermesh. This version is finished with black fold-over elastic. I panicked a bit about the sizing and added some extra width here and there… and surprise surprise, it came out too big! The band came out way too loose and I had to rip out the elastic and stretch it much tighter.

In the end, I found this an odd garment to wear. The cups are ok, the band is still loose, but the wide bra strap elastic I used quickly dug into my shoulders. I had a blinding headache the day after wearing this for a few hours, and I wonder if it was related. My theory is that with the cups and band so soft, the straps were left to do all the, um, heavy lifting! I later went back and added foam into the cups to see if more support would make it more comfortable – nope! This one is a write-off.

For version two, I turned the back into a more classic two-strap attachment instead of the racerback, so see if that made the straps more comfortable. (It did!) I also *for the first time* sewed with cut-and-sew foam! Why have I been fearing this for years? It was easy to work with and the finished support is much improved.

This version turned out small. I made the mistake of cutting off the extra width I’d initially added to the pattern AND using foam all in one go! I got trapped in it the first time I tried it on! Luckily, I was able to install a hook-and-eye which makes it easier to put on and with a looser band, my bust fits better into the cups. Still, if I did a normal stoop-and-scoop manoeuvre, the cup would barely cover my nipples. From a logical point of view this fits terribly… and yet it’s comfortable to wear, stays in place pretty well all day, and the cleavage is A+!

For version 3, I added width and height to the cups and band, and had another go with the foam. I covered it in the same ITY I used for a Santa Fe tank, and I love the look. This one might have turned out better if I hadn’t run out of good band elastic and resorted to something cheap and local… and guess what? It’s too loose again! I was hoping this would be the magically perfect Goldilocks bra, but sadly, no. At least it’s wearable!

At this point I was out of foam and elastics, and a trip to Bra Maker’s Supply was wasted when they turned out to be closed on the weekend! I decided to wear my bralettes a while before making more – and here is what I’ve learned:

Overall, there is definitely a role for this kind of bralette in my wardrobe, and I’ll be wearing them for sure! If I can get a more snug and stable fit, I’d wear them to work as well as on the weekends.

At this point, you are probably all wondering, “Would that bralette work for me?” The truth is, I can’t say! I’m at the top of the patterns size range, and I would typically wear a 36G with a very snug band and sturdy materials. My bust is fairly self-supporting, but the bralettes certainly lift it higher. I assume other patterns like the Pin-Up Girls Sweet Sixteen bralette would be more supportive and accommodating for larger sizes, and the Cloth Habit Watson bra has been popular with people up to a D cup for years.

I’d love to know – Do you wear bralettes, and what styles work best for you? I plan on continuing my experiments, so I’m open to advice and suggestions!