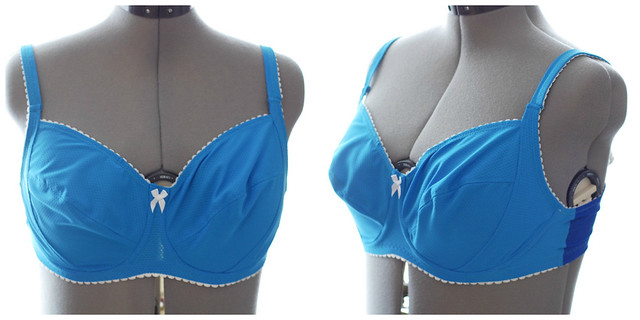 Ta-da! My new comfiest bra, courtesy of my custom-drafted pattern by Emerald Erin.

Of course, it fits me better than it fits my dress form – she’s set to have the same full bust, but my underbust is at least 6″ smaller. You get the idea though!

For my pattern, I chose a three-piece cup, which I’ve sewn up here with a double-layer power bar. It’s quite full coverage, which I like for an everyday bra. At some point, I’d like to work on a plunge or demi cup version for when I want to wear a lower neckline. 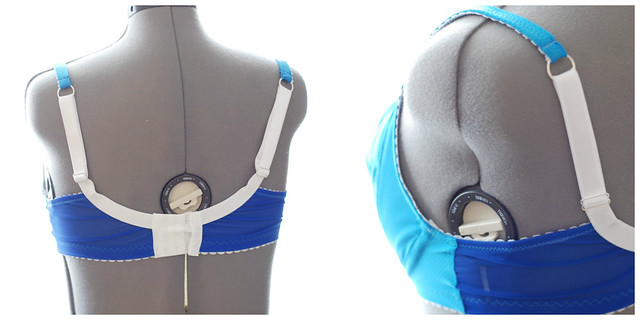 I’m still working out my favourite strap style and dimensions. This one was made with a large findings kit from Erin, which I like for the wide band elastic, but I think next time I’ll buy narrower strap elastic. I like my band super snug, so the straps aren’t actually bearing much weight and don’t need to be so substantial! 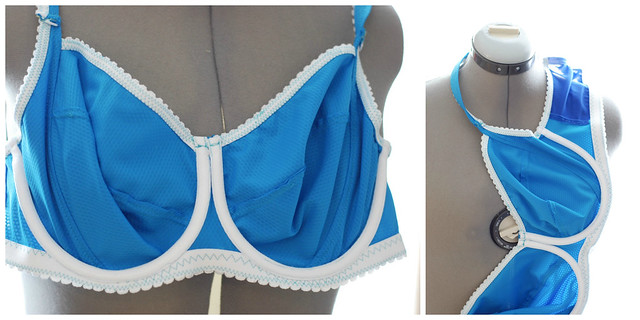 Check out the vertical “Bliss” wires! They are narrower and more u-shaped than the standard bra wires I’ve been using, and I quite like the front-and-centre effect. It’s not at all a push-up bra style, it just keeps things from migrating under my arms! 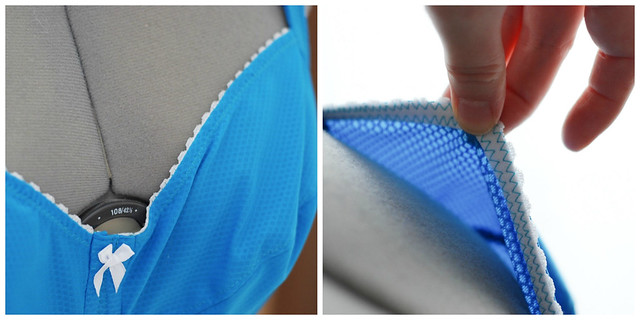 The fabric is really what makes the bra, though. It’s a wicking knit which is stable enough to give good support, but has just enough give to allow a natural shape. It’s holy-sh*t-comfortable compared to the duoplex I’ve been using, and doesn’t flatten my upper cup the way duoplex does. I’ll be making a lot of bras in this fabric, including a red version inspired by this bra of Erin’s!

One thing I do notice is that in this fabric, the front bra frame (is that what it’s called?) needed more stabilization. It’s cut with the least stretch going horizontally, which means it does have a bit of vertical stretch… and although the cups went in beautifully, I think the whole thing stretched a bit during sewing. As a result, the wires come perfectly to the top of the cups in centre front, but are almost an inch short of the top under the arms. I’m choosing to think of it as “extra fabric to scoop in underarm tissue” as opposed to “the wires are too short”…since after all, the wires themselves are the same length! It’s just that the bra turned out taller. The wires fit perfectly in my duoplex version, so next time I’ll make sure that I stabilise the frame with another layer of fabric.

Below is the duoplex muslin I sewed as we worked on fit. (Duoplex, if you don’t know, is the kind of super-sturdy, unforgiving fabric that will survive the apocolypse. It will lift and support boobs of any size, but on it’s own it’s a bit utilitarian for my taste!) 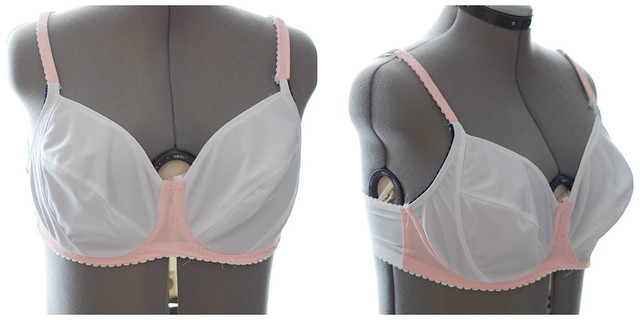 Basically, I sewed up the first version of our pattern, and it was too large in the upper cup… Erin redrafted it, and it ended up a bit too small! Version 3 was just right. It was awfully nice not to have to make the tweaks myself – the thing about bra fitting is that there are so many ways you could adjust for each fit issue. (For example, my instinct when the upper cup was too big was to take a vertical wedge out, but her’s was to rotate it out horizontally.) 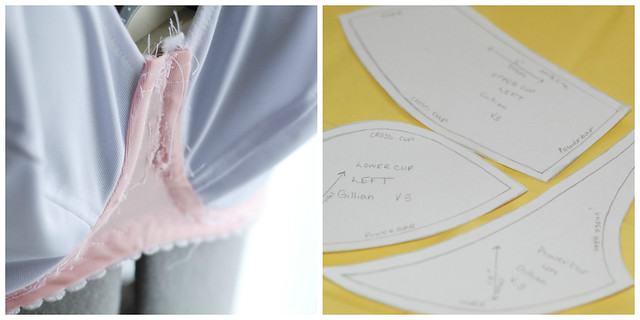 For each alteration Erin scanned and emailed new pattern pieces as a pdf, and I’d rip out the old cups and put in new ones. As you can see, the sewing is sloppy… but on the up side, I got a lot quicker as slapping a bra together! I don’t use a single pin any more, which is just how I like it. The overall shape in duoplex is more lifted and slightly pointed, compared to the wicking version. I’m going to try sewing it up in bra tulle, and then maybe I’ll to pictures wearing each version under a t-shirt to see if I can capture the difference in shape.

I thoroughly enjoyed working with Erin on this pattern (Ok, she did all the work!). Each version of the pattern lined up effortlessly, and there was never any need to stretch or ease things to make them fit together. (I’m looking at you, Pin Up Girls Classic!) She was a great cheerleader and worked really quickly. If you ever happen to be in southern Ontario, I’d highly recommend her! (And local sewists, what do you say we make a trip to Belleville this summer?)

47 thoughts on “My Custom-Drafted Bras!”