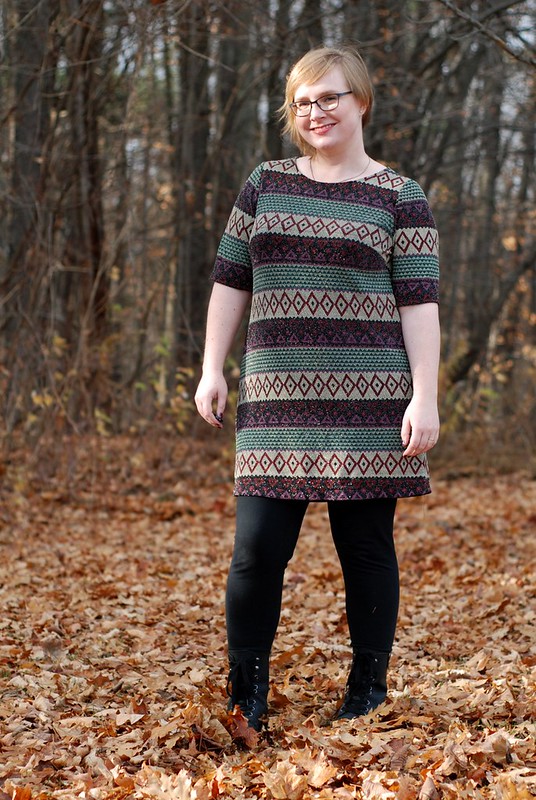 I’ve been on a mission to find a TNT shift dress pattern lately, and I think I’ve cracked it!

The pattern is the Sew Over It shift dress, more or less. My muslin showed that the sleeve head is way to tall with too much ease for a knit dress, so I recut the armscye and sleeve head using the Sewaholic Alma blouse. Really, comparing the patterns, I should have just started with Alma as my base – it’s very similar to the shift dress in shape, and has the bonus of offering front and back fisheye darts if you want to make it into a more fitted sheath. (I did actually consider this route, since I’ve made an Alma dress before – click the link if you want to read my 2012 thoughts about editing, photography, and taking fancy photographs vs. getting the job done!) 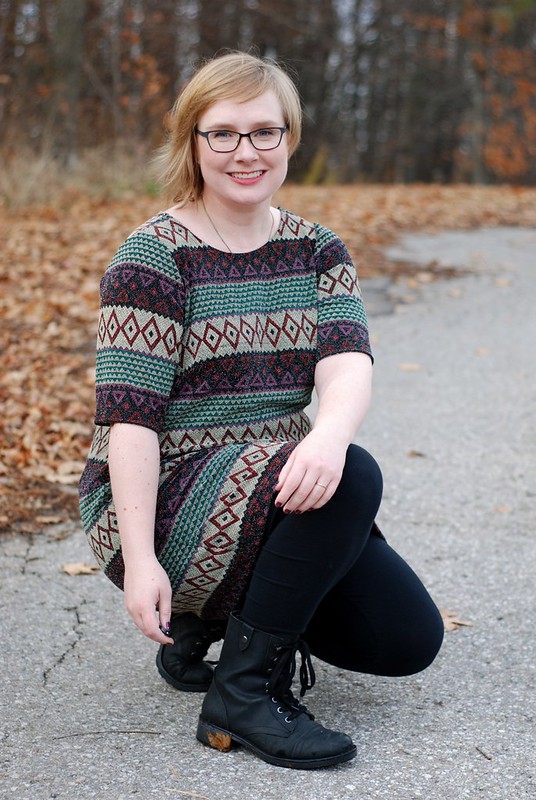 My first muslin of the pattern in stable french terry turned out to be a shapeless mess – after recutting it, it’ll be a wearable house dress, but it’s not great. For this second version, I totally undid the FBA that I’d been so worried about doing! I’m not quite sure why I don’t need one, but it seems to fit fine as is! 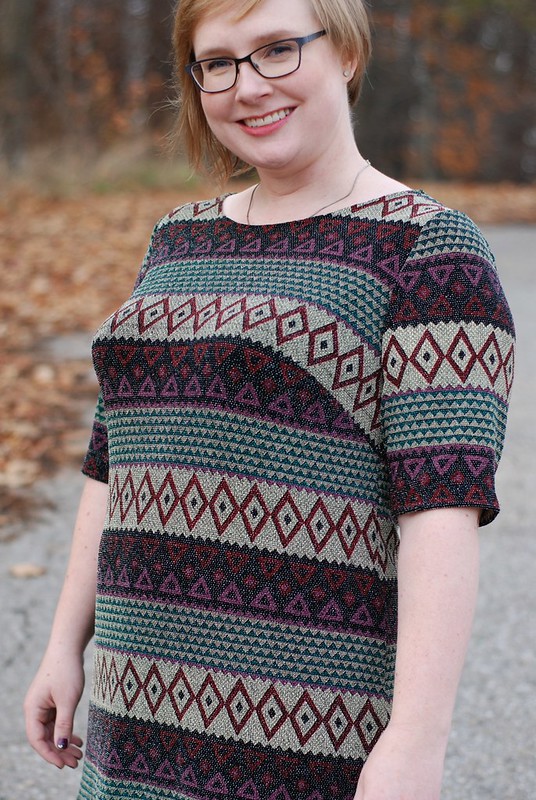 This fabric is… well, cheap and hideous and I love it! It’s pure synthetic, and it feels like it. No mascarading as a more luxe fabric here. It’s a double knit, with a slithery black layer underneath, and a scratchy puffy paint print with metallic threads on the front. Sounds awful, right? But dang, if it doesn’t make a flattering dress!

I think the proof of a well-fitting shift dress is how it looks when you aren’t standing perfectly straight… so here I am, lounging on my car! 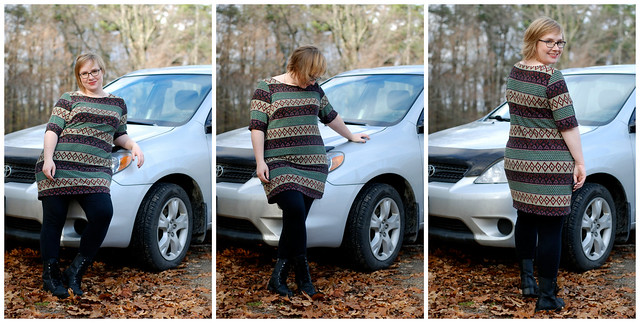 (Any one else own a silver Toyota Matrix? They are really common around here – I saw 3 in just 1km of road yesterday!)

What I like most about this dress is that the slippery inner surface of the knit means I don’t need a slip but the dress falls back into place perfectly after I bend or move. My french terry version doesn’t do this as nicely, which makes me question my choice of a sweater knit for my next version… should I bite the bullet and line it so that I end up with a dress I’ll really like? 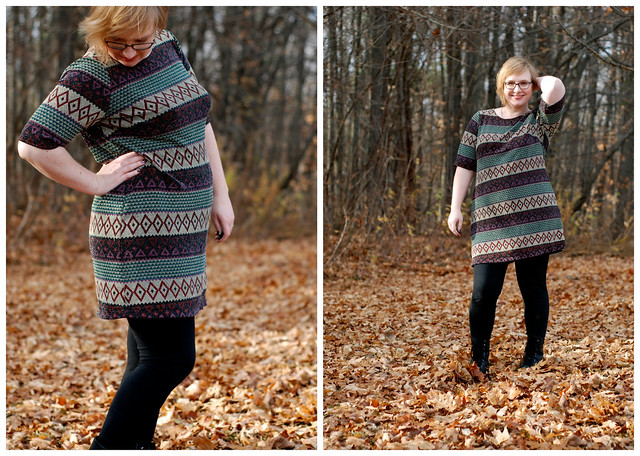 I matched the stripes from the hem up, and not from the shoulder down, since the bust dart would change the whole alignment. I actually think I could have pattern matched the sleeves if I’d rotated the pattern piece 180*… but I only had 1.3m of fabric, so frankly, I was just pleased I had enough left for sleeves at all! 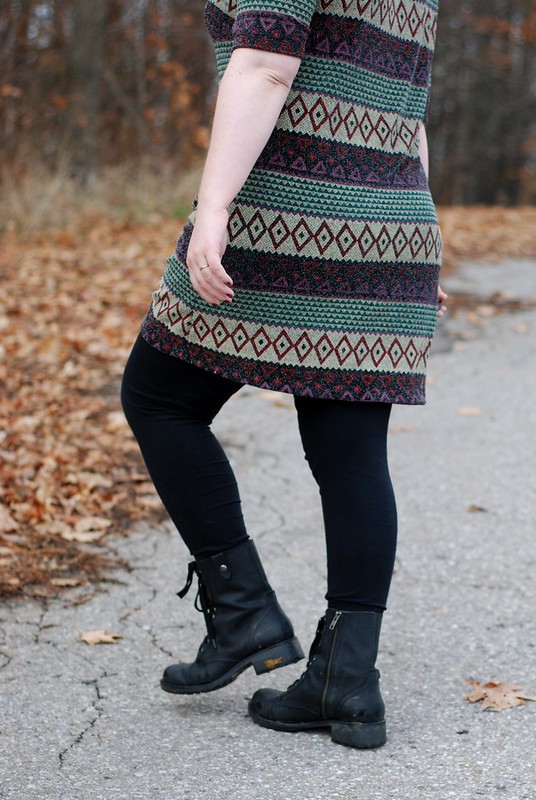 My favourite part of this pattern is the sassy length. I love short dresses with leggings and boots in winter! If you try the pattern though, keep in mind that I’m only 5’2″/160cm, so it could be much more mini on you!

Since this month’s Better Pictures Project theme is editing, here’s one picture, edited 5 different ways! (The original is top left.) 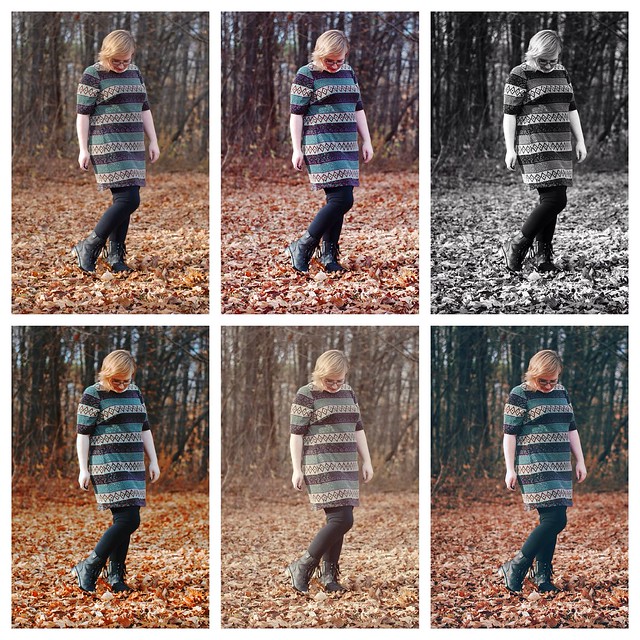 Which effect do you like best? I think the bottom left is closest to how I usually edit my photos – saturated with dark blacks… but the bottom right is closer to the trendy matte blacks that Heather talked about here. The two centre pics are less saturated than I usually prefer, but I could see how the dreaminess would be right for some outfits. All of these are preset filters from the Darkroom app on my phone – right now they are all a bit too obvioulsy editing for my tastes. I think any of them would be good if they were applied at less than full-strength!

Shift dresses – editing – sparkles! I don’t know WHAT to ask you about after that rambling post. Tell me everything!