Feels like a long time since I posted any new projects! I did plenty of sewing in May, but none of it felt terribly exciting… but lucky you, here it is, in order from least liked to most favourite! 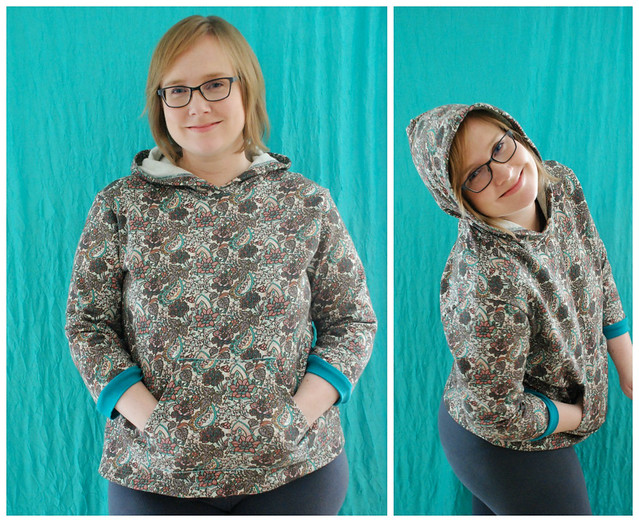 This one is a lesson in print scale. I bought this lovely french terry locally, and it’s got great coral and turquoise in a very Liberty-esque print… but from a distance it’s just washed out and blah. I also was cheap and ran out of fabric to make full-length sleeves. I might try to go back and get some more, because it’s a bit pointless as is!

***BTW, have you seen that jalie is slowly releasing their new patterns this month? The first 3 patterns have been very sporty though – I’m really hoping there are some new clothing patterns too, because I can’t get enough of the Jalie raglan and hoodie! 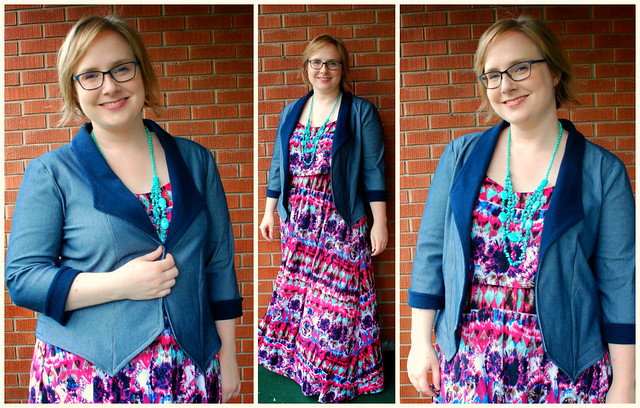 Next Most “Meh!”: Grainline Morris

I want to love this one so much, but I actually prefer my first Morris! This one is made of really nice jegging knit, and I imagined it would be the perfect cropped denim jacket to wear over maxis on summer nights. In the end, I’ve got a few issues with it

1. It feels too long to wear with dresses. I wonder if it’s because I’m short but wearing a large size – is it longer because it’s bigger? It’s the same size as my first one, it just feels dowdy.

2. I probably would have liked it better without the contrast lapels and cuffs.

3. I chose the lighter side of the knit (instead of the darker cuffs/lapels) for the main jacket, but it really catches the light and shows wrinkles. Maybe the darker side would have been more flattering?

I’ll still wear it… I just haven’t reached for it yet! 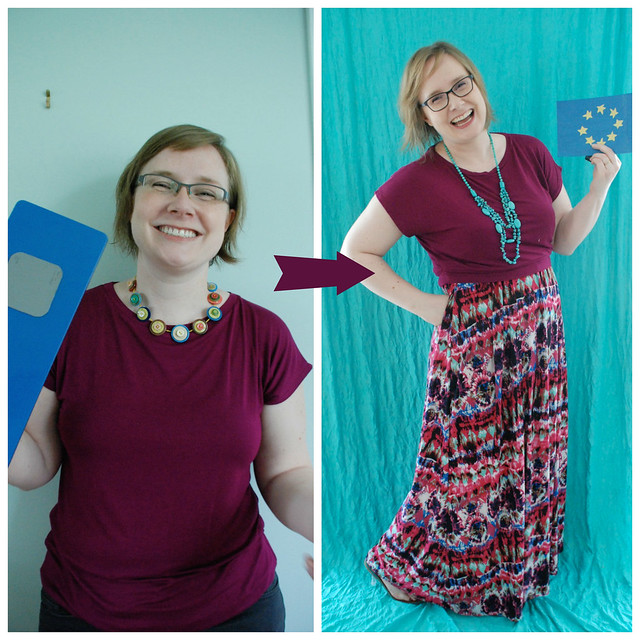 I haven’t been wearing this Maria of Denmark Kirsten Kimono Tee much this year, so on a whim I hacked it off and made a cropped shirt to layer over dresses. Cropped sweaters are all over sewing blogs this year, and I’m happy to jump on board. I made a cropped plantain with a tie hem last year that has been surprisingly useful. I figure between turquoise and this pinky purple, I’ve got a layering top to match any dress!

***Speaking of Maria of Denmark, have you seen her new wrap dress? It’s on sale, and every pattern I’ve ever made of her’s has been really well designed! I’m tempted even though I still have a Muse Gillian Wrap Dress on my to-sew list! 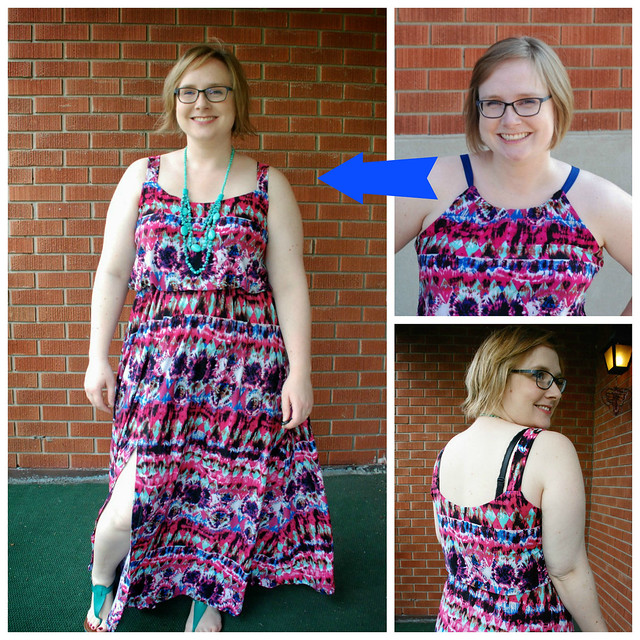 I never loved the Sewaholic Saltspring dress I made for Oonapalooza last year. I thought I’d love a high faux-halter neckline like this, but it turns out, I don’t!

So, one day during MMM I cut off the top seam of the front and back bodice, resewed it with a facing, and added more bra-friendly straps. (Not perfectly aligned in the back, but whatever.) I like it so much more now that i don’t have to wear a strapless bra with it, and I think the neckline is more flattering, too. It’s basically back to the way Saltspring was originally drafted, so I think I might make at least one more Saltspring this summer to add to the collection!

Turns out my favourite makes are both refashions! There’s something so satisfying about simple changes to make something more wearable. I had some fugly sewing fails in May too, so no-fail projects were much appreciated. I’m 10 days away from the end of the school year though, and then I’ll sew, sew, sew!

So tell me, what would you sew if you suddenly had two months with nothing but free time? (It’s unpaid and I’m not yet employed for the fall, so don’t envy me too much! 😉 Tell me your top three projects you’ve been dreaming of making if life wasn’t getting in the way!