I’m constantly fascinated by which patterns become popular. Why are some a hit and some not? I’ve written about it before, twice in 2012 and once in 2014. (The 2012 ones in particular are real a snapshot of what was popular at the time! Remember Hazelmania? But impressive that Scout tees are still popular 3 years later!)

The pattern landscape has really changed since 2012. There are so many start-ups now with just a few patterns that it makes the more established designers like Grainline, Sewaholic, Colette or BHL seem like titans… but clearly in the case of BHL, things still aren’t easy!

In such a competitive market, it’s fun to see what marketing strategies designers are trying. Here are some I’ve noticed lately – I wonder which of these strategies is actually most effective? 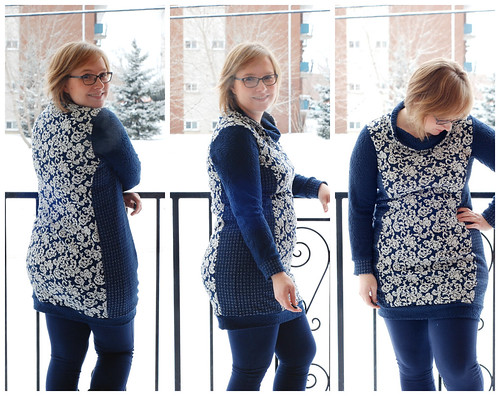 My Paprika Pattern Jasper dress, sewn with a free-to-me pattern.

Funki Fabrics has been giving away fabric in return for blog posts like there is no tomorrow. I said yes, like most us… but do you think it is actually translating into sales for them? I can’t think of any post where someone *bought* Funki Fabrics, can you? (Maybe it is – only they will know!)

On the other hand, there’s the well-established practice of designers giving free patterns to bloggers to try out. For example, Lisa from Paprika Patterns sent the Jasper dress out to a handful of us, and while we weren’t the coolest of the cool bloggers, a couple of people since then have mentioned that they bought the pattern after seeing it work on different body types. (Who knows how many sales it takes to be “worth it” though…) I know that when a pattern comes out, like the new True Bias dress, I wait a few days to see it pop up on blogs before I decide if I want it or not. Kelli can make anything look great (more on that star-power later), but I rely on other bloggers/testers to convince me that it could look good on me too!

In the past year, several pattern companies have branched out to do other things as well. There’s Colette’s magazine (Does it create profit? How? Seems like so much work – but I guess the subscription fees are good reliable income?) and BHL’s on-demand fabric printing. Sewaholic and Thread Theory both sell some notions along side patterns, and Maria of Denmark is doing online fitting courses. Caroline from Blackbird Fabrics has left Sewaholic and carved out a nice little niche selling dressmaking fabrics online – while at the same time, Sunni from  Fashionable Stitch (not a designer, but interesting nonetheless) tried running a IRL store, but pulled back to only online sales again. I guess the lesson here is that diversification can be a success, but it can also fail. I’m so glad I’m not a designer putting it all on the line! 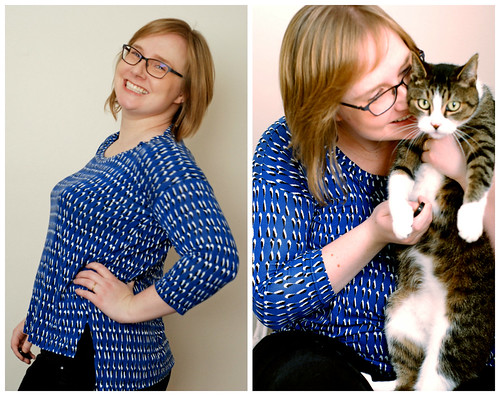 My recent Hemlock, made with a free pattern.

A couple years ago, free patterns were the big way to get people trying out your patterns. There was Deer and Doe’s Plantain,Grainline’s Hemlock,BHL’s Polly, Cake’s Blank Canvas Tee, Maria of Denmark’s Kimono Tee, and the one that may have started it all, Colette’s Sorbetto. I’ve sewn all but 2 of those patterns, so it certainly worked on me! I love trying out a free pattern to see how user-friendly the PDF is, and how nicely the pattern goes together. The last free pattern I can remember being released was Thread Theory’s men’s undershirt, perhaps a year ago? Since then, I can’t remember any free patterns. Has it fallen out of fashion for a reason, is it just coincidence, or am I missing more recent releases? 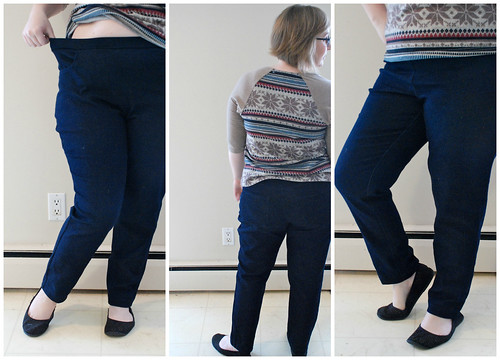 One of 6 pairs of Ginger jeans I’ve sewn in the last 4 months!

Some designers have the knack of releasing really distinctive patterns what make all think, “I didn’t know I needed that until I saw it!” Closet Case Files is a great example – body suits and skinny jeans were not on my sewing radar, but they quickly became must-try patterns in the blogosphere. Muse is another good example – the Jenna cardi fills a niche, and the dress designers are all a little different than the other patterns out there.

Heaven knows how to capture this lightening in a bottle though – it can’t be easy! Look at the new cropped sweaters, for example. There is already a very similar pattern from Blue Ginger Doll, but now Colette and Deer & Doe have released their own versions. I’m sure they were all developed separately and not copied, but then end result is that they will all be in competition with each other. Developing a pattern takes months of work and a serious investment of money – it must be so disappointing to realise someone else had a similar idea! 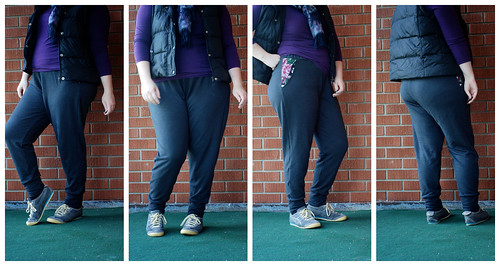 This pair of Hudson pants is now in the trash, thanks to super cheap fabric…

Sometimes though, it all comes down to star-power. The True Bias Hudson pants are pretty similar to the Papercut Patterns Anima pants, but since Kelli from True Bias is well-known, well-liked, and hella stylish, I think her pattern came out ahead. The Colette knitwear patterns over the last year have been a huge success, getting all kinds of people into sewing knits the same way that Colette cotton dresses got me sewing in the first place. The thing is though, there are some strange things about the knit patterns (the pencil skirt and the Myrtle come out huge, the pdfs are a bear to work with, and the techniques for lining the bodice or gathering the skirt with elastic seem overcomplicated). I think it’s the star-power of Colette patterns and the charisma of Sarai that make those patterns succeed, more than the patterns themselves.

The personality of the designer and their persona online can’t be overestimated. Think of the people like Sarai or Kelli that I’ve already mentioned by name, even though I’ve never met them… then there is Jen, Tasia, Tilly and all the other designers we “know” by name through their blogs, Twitter and IG feeds. If we know them and like them, we are more likely to buy their patterns. I think the “Big 4” companies know they are at a disadvantage when they seem faceless – surely that’s why McCall’s has been working so hard to invite bloggers behind the scenes and be active online. Personality can backfire though – I honestly can’t figure out why, but the few times I’ve been on GOMI they seem to detest certain designers far more than others. You can’t please everyone, and to some degree I get it… there are definitely online personalities that I connect with more or less. I guess as a designer (or blogger) it’s all about being yourself and hoping people respond well to that! 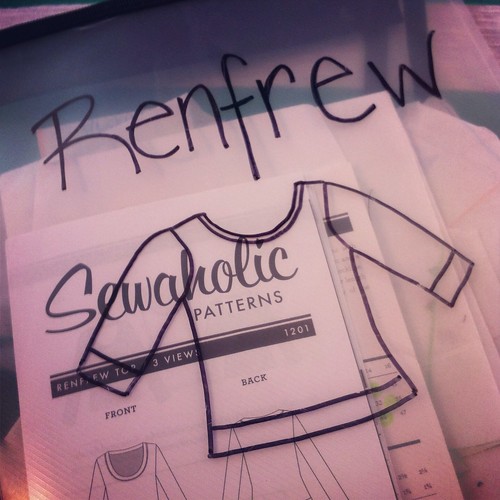 What makes you spend your hard-earned cash on a pattern? Are you more likely to be swayed by fashionable bloggers or a technical line drawing? Do you buy everything that is new and trendy, or only buy patterns that are distinctively unique? Does connecting with designers online make you more likely to buy their patterns? And do any marketing methods really turn you off? I’ve love to know what you think!

(And for the record, I’ve got so much admiration for people who chose to pursue sewing/designing as a career – it’s not an easy road, and it sure wouldn’t be for me!)

116 thoughts on “The Popularity of Patterns, Part 4”