You know the pattern by now… and you’ve either sewn it or thought of it, right? So I’m here representing for the big-bottomed girls – here’s how View B works on a rather round pear!

The good and the bad: Sadly for me, my hips are actually an inch too big for the largest size of this pattern. Happily though, Heather Lou assured me on Twitter that the larger sizes run a bit big… and lo and behold, I actually had to cut the hips down a size!

Here’s some other good news: The rear crotch curve was an exact match for my trusty Style Arc Elle pants! Except it took me 8 muslins to get that curve on the Elles, and didn’t have to change a thing on the Gingers! (Well, that’s very almost true…more detail later!)

You know a pattern is good when your fingers itch to make it again… which I why I now present you with 3 pairs sewn in 3 days! 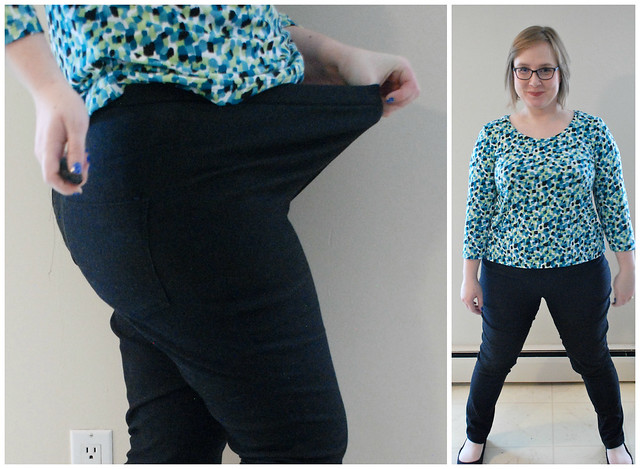 First thing you’ll notice in the pic: I switched the normal waistband for my favourite covered elastic waist! I first posted my love for pull-on jeans in 2012… and they really are perfect for me.  Super high waisted, they stay in place, are comfy and don’t cause muffin top. ‘Nuf said!

These were my muslin – can you believe that I was such a careful seamstress as to baste everything together for a fitting, the rip it all out and resew? Yikes. And after all that, I still had to take in 2″ from the outer side seams. That’s what I get for using fabric with 50% stretch! (This is actually the reverse side of some brushed grey twill I’ve used before… but I’ve decided I hate the wishy-washiness of grey pants, and I wanted black!)

These are the snuggest fit of my 3 pairs – the calf is noticeably tight to the leg. Normally I’d think that was too tight for pants i=I wear to work, but these are so stretchy that I think it’s ok.

(Side note: If I were to be picky, how should I get rid of the diagonal wrinkles from my knock-knees, without making the outer side seam longer, which gives me shar-pei wrinkles instead?) 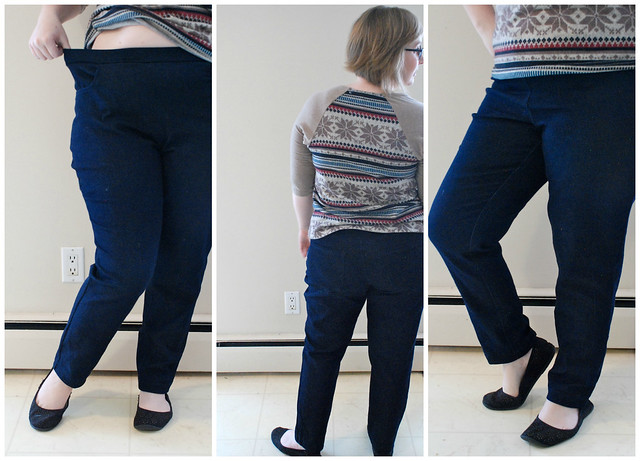 These are going to be wardrobe workhorses! I wore them yesterday, and the denim didn’t bag out at all during the day. Yay! I also taught Phys Ed in them and has no fears of flashing anyone anything. Win.

The biggest differences between Gingers and my trusty Elles are:

And now, enough of those sensible basics! I present pair #3: Crazy Pants! 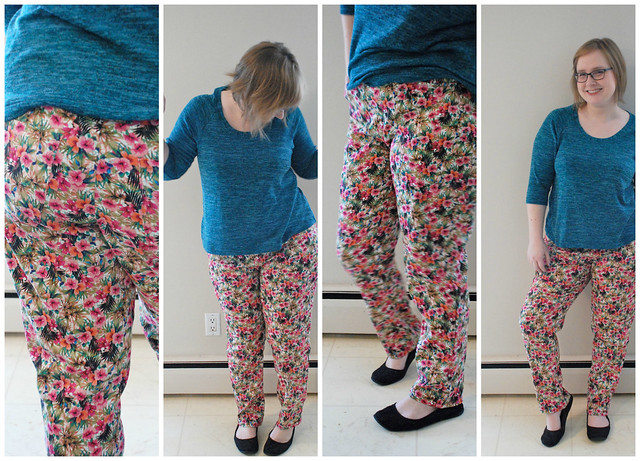 I bought this fabric and finished the pants the same day. They are thin and unseasonable for winter, but dammit – Knitnbee makes me want tiki style all year round!

These twill for this pair is lighter wight and only has about 10% stretch. Because of those two factors, I was wary of over fitting. I actually added .5″ to the outer seams, and I needed it! 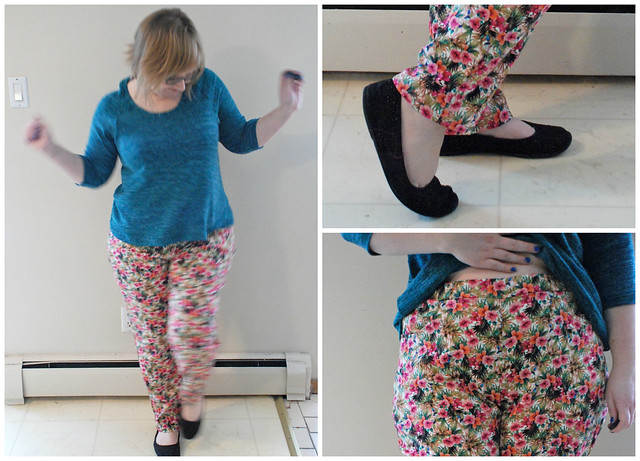 As promised, here are the fit changes I made on all 3 pairs:

I found it useful to try the pants on inside out after sewing up the side seam but not topstitching it. I had to take in the pairs varying amounts, depending on the fabric’s stretch.  Leaving that outer seam till last made it easy to fine tune the fit.

Finally, here’s what the camera doesn’t show you in the other pics… 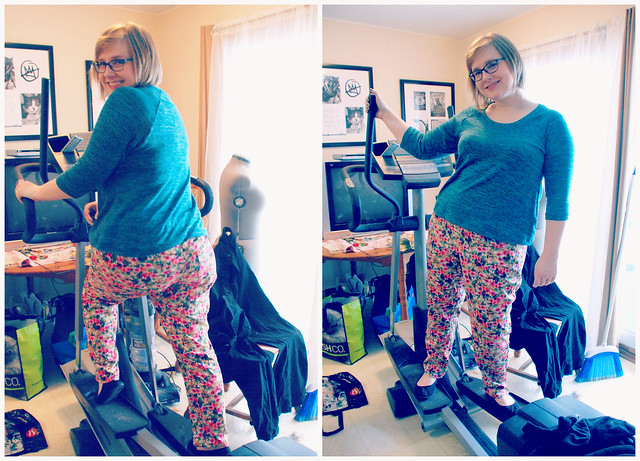 … the MASSIVE Nordictrack that has taken over my indoor photo space! I joked with Heather Lou online that I should just pose on it, so here you are! (This is what my apartment always looks like, FYI – stuff everywhere!)

Overall, I’m sure you can tell that I’m thrilled with the pattern!  No pattern is perfect for everyone, but this one suited my curves well. I made a conscious decision to go with good-enough fit and not to overthink it. I don’t want to make a million muslins, I just want to have pants to wear that are better than RTW! There’s a big fabric sale locally this weekend, and I’ll be on the lookout for more Ginger-worthy fabrics.

Do you own any pull-on jeans/jeggings? Is there any reason that a standard waistband is better, except that it’s prettier if it will be seen? (Needless to say, mine are so high-rise that it’s out of sight all the time!)