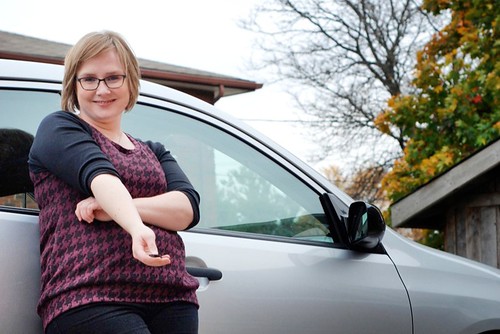 (The more I stare at this photo, the stranger the pose seems to me! I blame holding the camera remote…)

Two new things in my life: A new top, and a new-to-me car! One fleeting, and one hopefully more long-lasting. 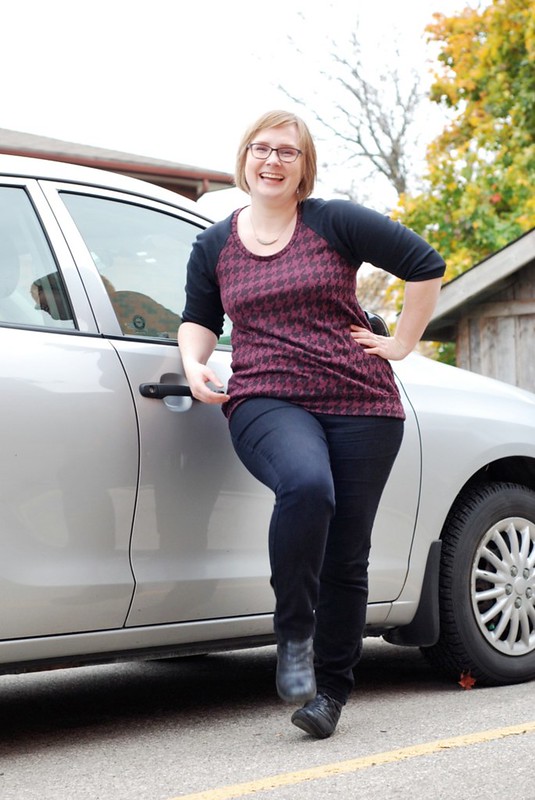 I didn’t get my full license until I was 27 (thought I had a beginner licenses for at least 8 years before that.) Since moving back from Japan, Jamie and I have been sharing a car – and frankly, it’s rather amazing that we made it this long with only one vehicle. Last year I had an hour-long drive to work through farmland, and this year it’s Jamie’s turn. Having only one car really limits which jobs we can apply to, so we were thrilled when my parents offered to sell us their trusty Matrix. It is such a pleasure to be able to leave work whenever I want, instead of waiting for Jamie’s long commute to be over… and I find myself running errands for no reason except that I can! (Well, I always could run errands in our other car, but I had to work out with Jamie if he needed the car first… first world problems, ya’ll!)

My favourite part about having a car (as opposed to biking or riding transit, which I’ve done in various countries for most of my adult life) is having all your stuff with you all the time. I have a slowly growing collection of clothing building up in the car (gotta have a choice of cardigans, jackets and scarves for cold days, right?), as well as lipstick, hand cream, emergency candy for when I’m cranky, and other bits and bobs. I’m a pack-rat by nature, so I find it so satisfying to be prepared! 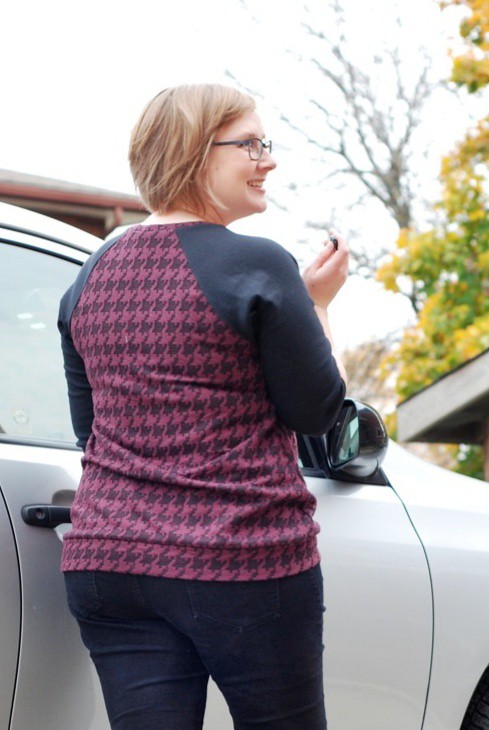 And now for the top – this IS a sewing blog, right? Not a ramble-about-cars blog…

This is my trusty Jalie Raglan top, which I’ve made 9 times now. I like it best as a sweatshirt pattern – the ones I’ve made in heavier fabrics get a lot more wear than the versions I’ve made in jersey. (I do notice that on this one there is some odd bunching in the back armpit…I blame the two different weights of fabric I used.)

The main body is a polyester double knit that I bought last year. I only got .7m, planning to make a mini/pencil skirt… but I fund I rarely wear skirts, so I went for a shirt instead. (I don’t like having to find a matching shirt AND cardigan AND leggings to go with a skirt… and then all those layers end up feeling bulky around my waist. I much prefer dresses!) 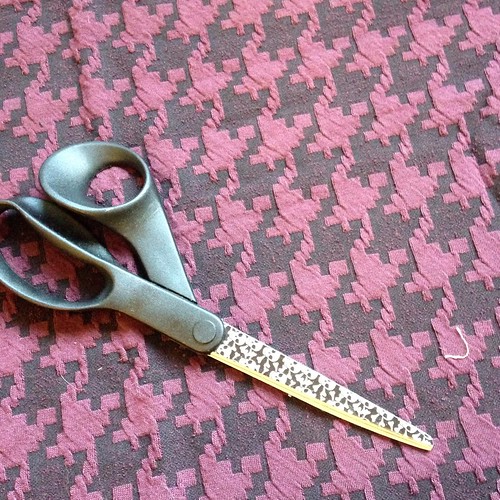 (This fabric is from the same line as the leopard double knit I used on my jungle January Lola. With I’d bought more of both!)

The sleeves are made from cotton interlock – I found a bunch at a second-hand store, and it’s what I’ve been using to make J underwear. But too bad, Mister – now this fabric is mine!

Even though this is a TNT, I’ve got a few issues with fit. I wing my alterations each time – maybe it’s time to trace a version just for sweatshirts? The sleeves are an odd just-past-the-elbow length, which I might alter to be either shorter or longer… and the hem of the shirt just isn’t the right length either. It has a slight high-low hem, which usually works well for me, but in this case the hemband creeps upwards and makes it look very puffy. I’m puffy enough without a shirt adding more volume around my waist! I think I’ll cut the band off and resew it so the hem is even in front and back. I tend to ignore most rules for how to look skinnier, but the one rule that makes sense to me is to have shirts end above or below the widest point of the body. This shirt ends right at the widest point of my hips, and that’s bad news. 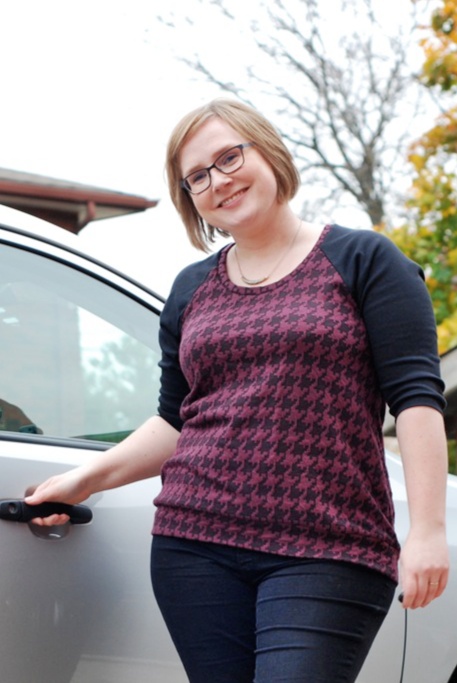 How do you get around your hometown? Car, bike, walk, transit? (Or never leave your house and do all your shopping online? 😉 It varies so much depending on where you live and work – I’d love to hear about it!