Have you heard of the Group of Seven? They are the most iconic of Canadian painters, famous for pictures of northern lakes, forests and arctic vistas. Go take a look at their pictures here: they are so gorgeous it makes my chest hurt! The Group of Seven (and Tom Thomson, who was a friend and sort of honorary member) capture the longing we all have for camping and cottaging up north, in the land of “blue lake and rocky shore”. 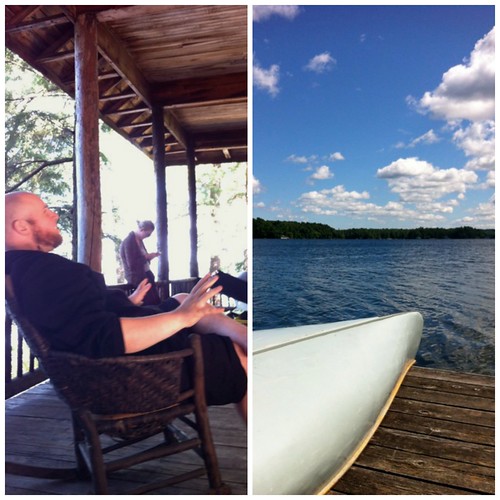 The highlight of our summer is usually a few days at a friend’s cottage… but this year they aren’t renting out, and we’re stuck in the city instead. Not to worry, though – I found some rather cuckoo ITY fabric that reminds me of Group of Seven sunsets, so now I can channel “cottage country” all year round! 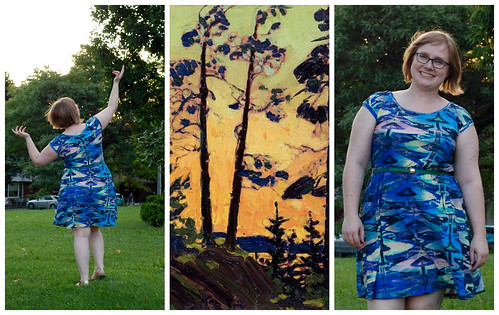 (Yes, I’m playing fast and loose with copyright by including famous paintings in my collage… bad me.)

The dress is, of course, a Comino Cap. It *might* be the last one I make for a while – 4 seems like enough! Although I am considering making a wintery version by subbing in the Olivia Oversized Tee pattern for the bodice… 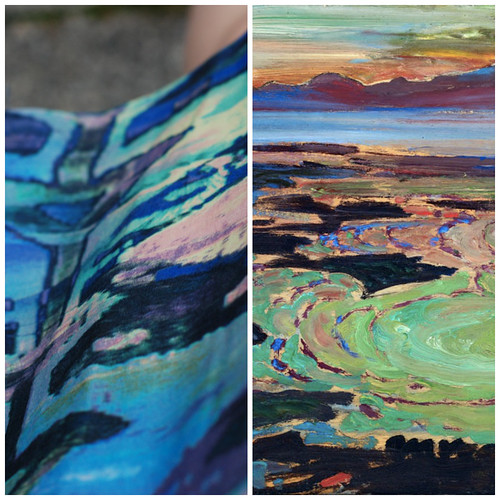 Can you see why this fabric reminds me of the Group of Seven? I love the contrast of glowing pale yellow with purpley blues and turquoise, contrasting against the black. It’s a dead ringer for the painting on the right – colourwise, at least!

That said, when I tried to interpret the graceful movement of the trees into my pose, things didn’t go that well… 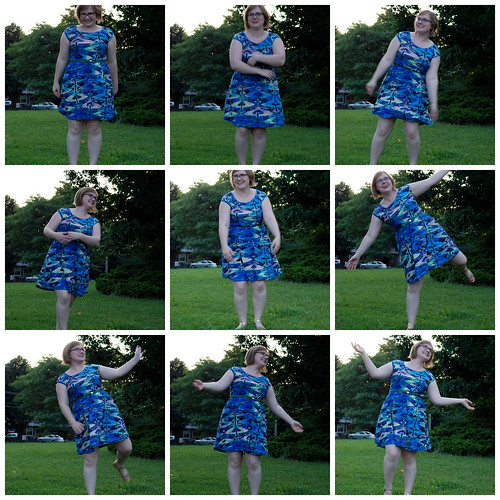 I’m definitely not a dancer! 😉 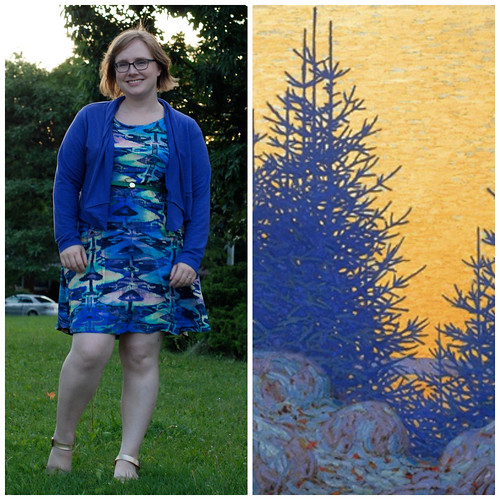 The dress is a perfect match for the lovely purple French Terry I got at Cali Fabrics recently… but something didn’t go quite right in my pattern hacking. I tried to adapt my TNT McCalls 5890 cardigan to make it more like this Style Arc cardigan, but I ended up with an unflattering amount of fabric in the front… so I cut and changed and fiddled and ended up with the sort of cropped jacket thing I’m wearing in the pictures. There’s an exposed serger seam front and centre when the collar turns back though, and it drives me crazy.

In my head, it was going to be cosy and drapey and a dream to wear… in practice it’s ended up stiff from the folded bands (Which were originally wider and not folded, but then there was too much fabric). It’s passable, but not great. I’ve got 1m more fabric though, so I think I’ll cut off the collar and front and recut to the original pattern, which I know works well for me. Oh well, you win some and you lose some! 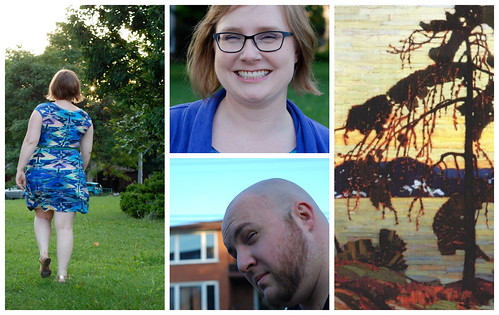 Also, many thanks to Jamie who has been a very obliging photographer this week! I’ve been feeling like I need a break from tripod pics on the balcony all summer, so I finally asked him for help (He always says yes, but I feel guilty anyway…) He’s been really good about trying to capture what I want, and also helping me avoid too many telephone wires, cars and other city eyesores in the background. Thanks babe! (Oh, and ps: I grew up with a copy of the painting above in my bathroom, which explains why I love it so!)

I think it’s pretty clear that Comino Cap has been my pattern of the summer… which makes me wonder what my pattern of the fall/winter will be? Maybe something new, yet to be released? **cue new pattern cravings!**

What was your pattern of the summer this year? Something that you made more than once, or something that made you feel summery every time you put it on?

26 thoughts on “Channeling the Group of Seven”