Today is our wedding anniversary… and I’m ashamed to say that we I totally forgot and made plans to do entirely separate things all day! Jamie went to see Guardians of the Galaxy (for the 3rd time) with his brother, and I drove around to a few fabric stores about an hour away. Ah, romance! 😉 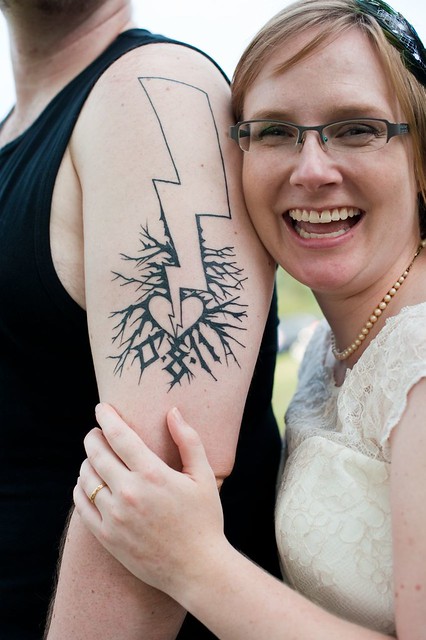 (In fairness, we did celebrate out official got-married-at-town-hall anniversary last week… but for goodness sakes, my husband has a tattoo of today’s date on his arm? How did I forget it?)

I’m going to two weddings this month, which has made me reminisce about my own. We had a fantastic day – casual, nontraditional, and fun. (Oh, and stinking hot!) I don’t want to bore you all with a sappy recap, so instead, I’m going to show you some of the outtakes, mistakes and shenanigans that I remember far more fondly than the centre pieces, favours, or any of that stuff that takes so much planning! 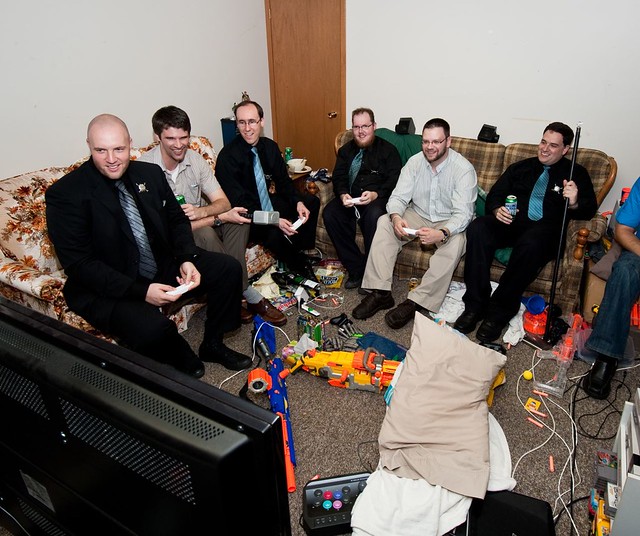 1. Prewedding nerd time! We got married at Jamie’s parents house out in the country… which is also where his brother/best friend lives the dream life of a well-stocked basement dweller! Because getting married doesn’t have to mean growing up, ammiright? 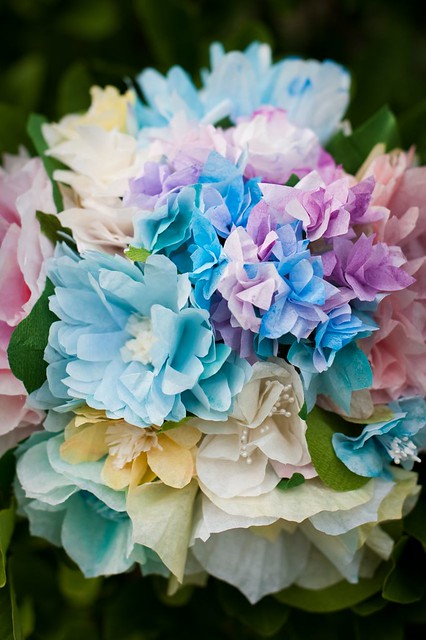 2. Coffee Filter Flower Bouquets. I worked on these for MONTHS! I dyed the filters in japan, brought them home to Canada, and spent the evenings making endless flowers. Loved them… and totally forgot to carry them during the ceremony! My bridesmaids realised they’d forgotten their bouquets as the started walking, but I admit I didn’t think of it until after. Oh well – didn’t miss them, and it meant the wedding party got to strut across the lawn like badasses to this. 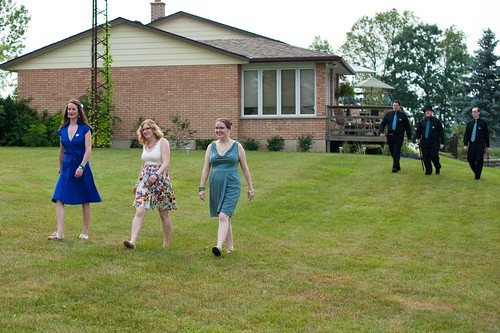 (Note, if you will, my sister’s Myrtle-esque teal dress… and my brother-in-law’s top hat and 5’ high walking stick, made of a metal pipe and topped with crystal knob – because weddings are for making dreams come true! 😉 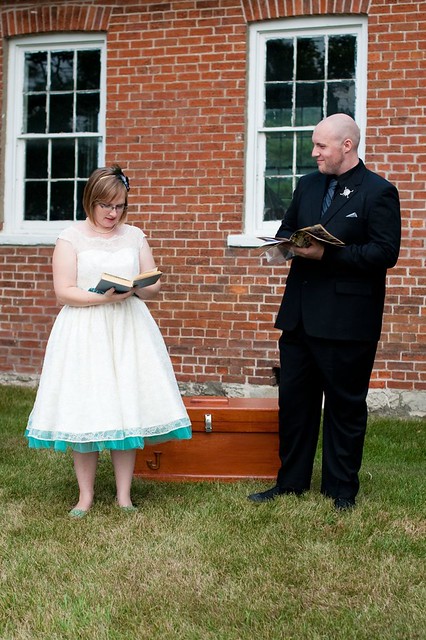 3. Marrying ourselves. We’ve both atheists, so we never considered having a minister… and since we are both teachers, we felt like we could easily keep things rolling ourselves! We walked down the aisle together, and read from the program/script we had taped into a book. Mine was Anne’s House of Dreams, where she gets married to Gilbert, and Jamie’s was a comic about Mister Miracle living in the suburbs with his superhero wife, Big Barda. 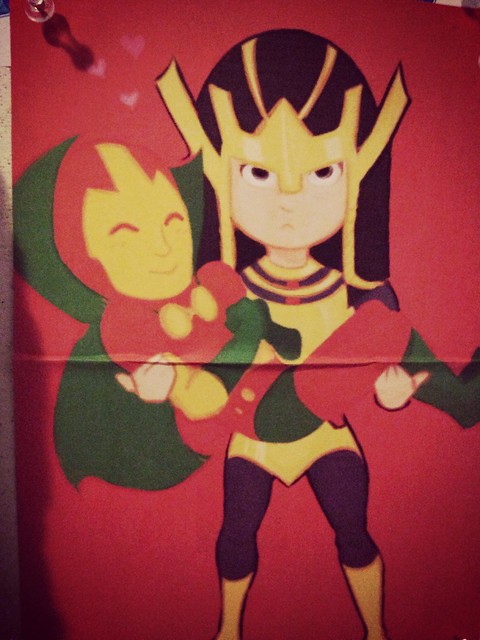 If you aren’t into comics, the hidden compliment of his choice is that Barda is taller and stronger than her husband – I dearly love Jamie for making me feel tough!) 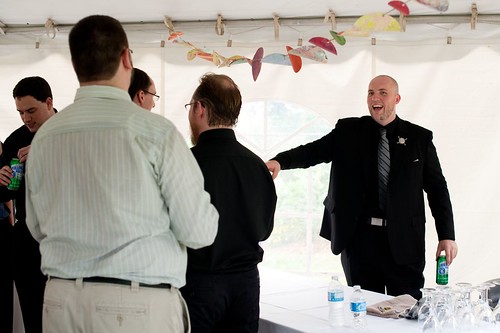 4. Casual Time! Shortly after the ceremony, the party began… and apparently even my comfy flats came of pretty immediately! 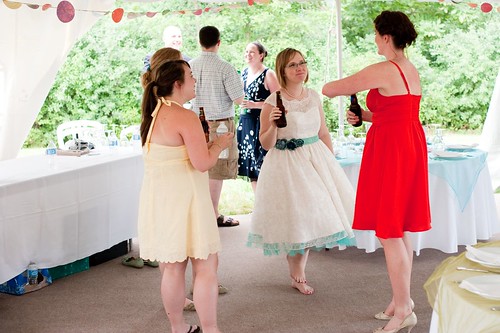 (Oh, and my dress? WAS FREE! FROM THE NICE PEOPLE OF THE INTERNETZ! I was active on Offbeat Bride, and someone offered up her custom-made dress which just happened to be my size! I added the lace belt with flowers, and sewed on the turquoise tulle, and my mom, bless her, altered the waist for me. Hard to believe I wasn’t a sewist 3 years ago, or I’d have done it myself! Now, the deal was that I pass it on after, like the sisterhood of the traveling wedding dress… but I admit I’m still too sentimental to part with it. Good thing it’s a timeless style! I’ll pass it on one day…) 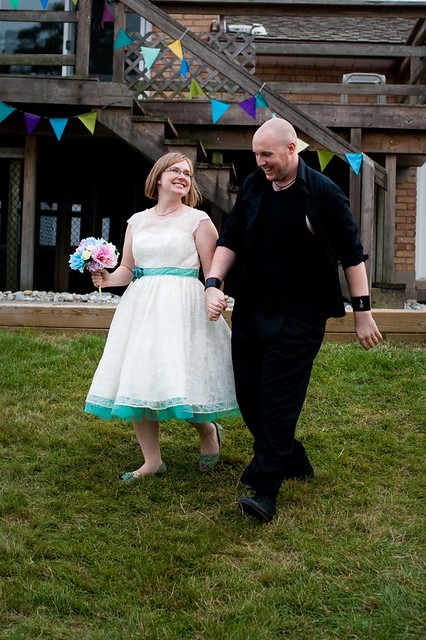 5. Bunting. My mom and sister made heaps of bunting… and it’s since been used for at least 6 other weddings, birthdays, and parties. It’s the sewing project that keeps on giving. They used bias tape and raw-edged triangles, and it’s held up really well!

(Oh, and Jamie broke out the casual clothes before dinner! Suits are just not him.) 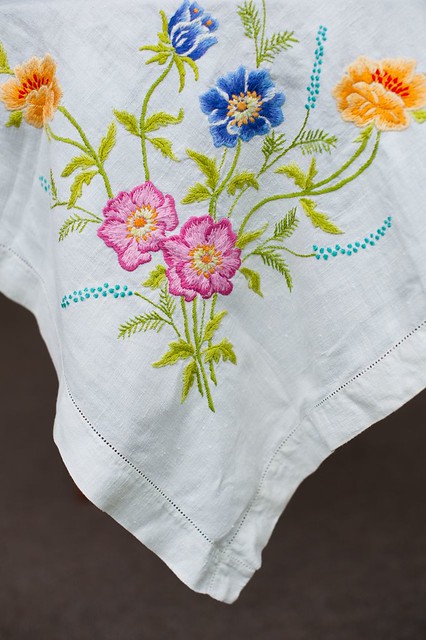 6. Textiles. It was the perfect excuse to dig out the family’s prettiest linens, like the tablecloth above. 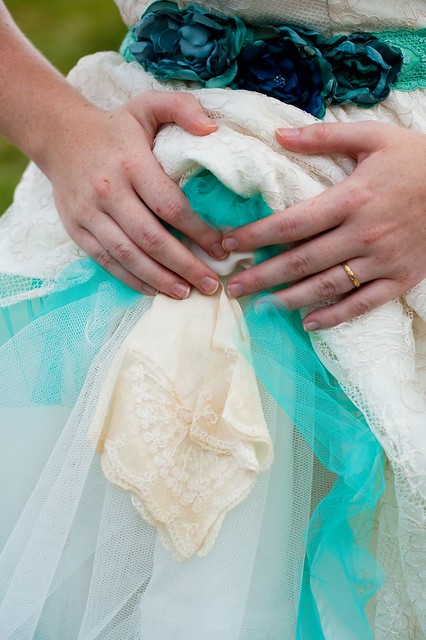 Pinned under my dress, as my something old, was this lace hankie made by someone at least 5 generations back in my family. My mom, sister, and Granny all wore it on their wedding day too! 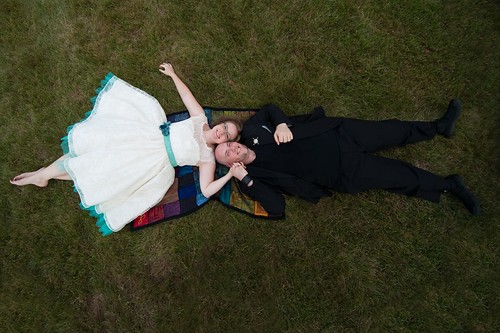 Much newer, but also precious, is this afgan my sister Anne knit for us. I use it every day, and I love it so much! She also knit me a gorgeous teal silk shawl to wear on the wedding day, but… I LOST IT!!!!! The night before the wedding I was crying looking for it, and of course, no sign. She was a champ about it… and thankfully it turned up later, safely wrapped in fabric and stashed in the same room I’d searched! I made a Scout tee to wear with it months later, and blogged about it here.) 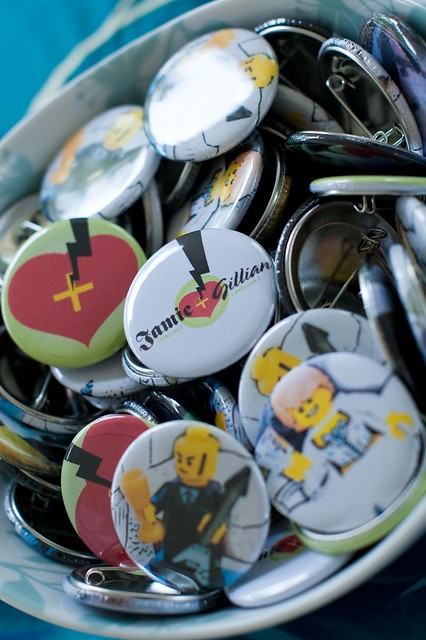 7. Lego Mini-Me(s)! My awesome family chipped in and made us cupcakes instead of cake, which were topped by Lego figures of jamie and I. Somehow though, the Lego figures got lost that night… so all we have are these pins with pics. (Seriously, I think losing things was the theme of our wedding!)

There you have it! A hopefully not gag-inducing reminiscence of our wedding. Three years ago we had just moved back from Japan (and Jamie had cracked his ankle bone as we left, so a month before the wedding he was on crutches!) It’s taken us three years to have jobs, an apartment, and two cats, but life is good, and there is no one I’d rather spend it with. いまからしぬまで, Jamie!

What went wrong at your wedding, or one you attended? Sure they all have #%$& ups, right?