I’ve been investing a lot of creative energy in a new project lately – Setting up my classroom for September! I’m teaching a new-to-me grade, in a new school, and cleaning out a LOT of old resources to make way for all the new ideas I want to try. It’s my 5th year teaching, but I’ll be using a completely new teaching approach for both math and language this year. On top of that, I’m trying to incorporate play-based learning (like in Kindergarten) into my Grade 1 classroom. Eeeek!

As a result, my sewing has been improvised, sloppy, and all about quick gratification lately! That’s really how I sew a lot of the time, but the reckless abandon (with accompanying adreoline!) really increases when I’m stressed. It sounds bad, I guess, in this land of careful, meticulous sewists, but it’s how I roll! 😛

Here are two t-shirts I made from my stash, both entirely inspired by other bloggers!

#1: Remember this awesome diagonal striped Renfrew from Me Made May by SewTell? 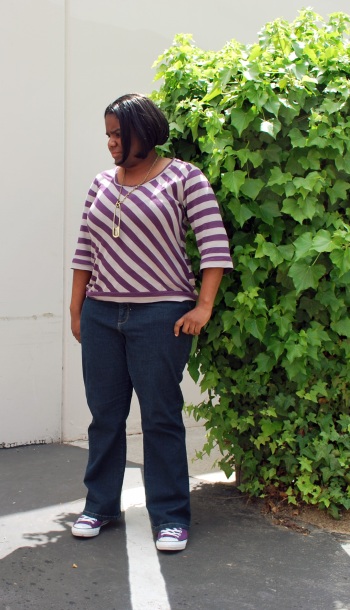 Now I have one of my own!

I used some thin slubbed stripe knit from Fabric.com that I already used to make my Mom a similar top. I used the same traced-from-RTW pattern that I used to make this floral top back in June. I love the kimono sleeves, which are comfy in any weather. All the edges are bound like a Renfrew.

#2: An how about Crab’s recent colour-blocked refashion? 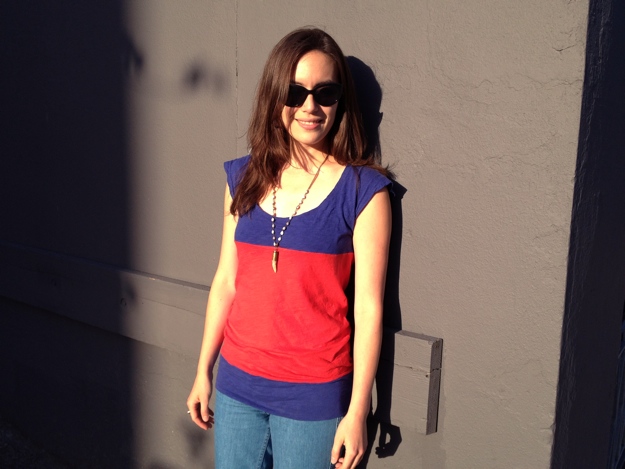 A few days later I had one of my own!

I whipped this one up with a bright pink stable knit remnant from my sister’s MIL and a leftover piece of eggplant-coloured bamboo jersey that I used to make cowls. If I had planned better, I would have placed the seam higher on the bust when I cut the pattern, so that I had enough purple to bind the neck. Oh well! Unfortunately, when I first tried the shirt on, the heavy stable knit pulled down the purple until the seam was *right* on my apex… and it gradually sagged even lower! Not a good look, as picture #2 demonstrates, so I serged about an inch off the horizontal join after the whole thing was finished. Now at least it’s wearable! 🙂

Have you ripped off been inspired by anyone lately?